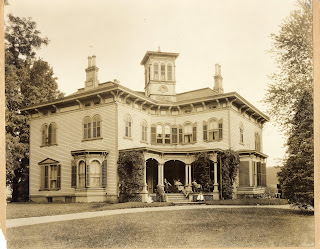 This delicious old farmhouse, originally called Lynfeld and still standing on the outskirts of Millbrook, NY, was built in 1871 for a rich farmer named Milton Conrad Ham. Ham's ancestor, Conrad Ham, came to America in 1660 at the age of 18 to work as a bodyguard, of all things, for Peter Stuyvesant. By the 1730s two of his grandsons made their way to Dutchess County and married a pair of sisters whose father would eventually own this farm and will it to one of his Ham grandsons. When this photo was taken in the 1920s, the Hams were prosperous pillars of the Town of Washington's agrarian economy. The current Conrad Ham, alive and thriving today, sold the house on 190 of its original 250-or-so acres to sub-dividers in 1969. The house on 23 acres changed hands half a dozen time until the present owner bought it in 1978. 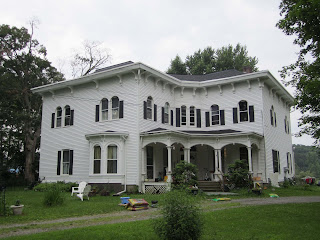 Here's the house today, looking like a once-beautiful woman squeezed into a too-tight house dress. The building has been divided into three duplex rental apartments, each with it's own private interior staircase. Two additional structures on the property - a small cottage and a newish two-unit structure built on the foundations of a former greenhouse - comprise the balance of a three-building rental complex. The ornate tower on the big house was removed during the Ham era, probably a victim of decay and Depression era economics. The vinyl siding was installed after the present owner took title. 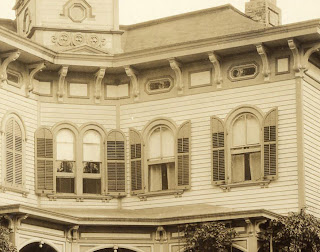 Lynfeld was designed by Milton Ham's unmarried brother-in-law, John Jay Ferris, an architect from nearby Pawling, New York. Ham, who was 56 at the time of his marriage, not only engaged Ferris to draw up the plans, he invited him and his unmarried sister Mary Ann to move into the new house together with himself and his new bride. This detail of the facade illustrates the elaborate detail that lends so much charm and visual interest to Victorian houses. 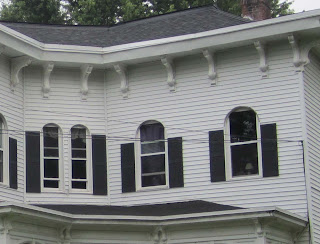 Alas, the purveyors of vinyl siding are immune to this charm, and the often conscientious owners of old houses can be just as unaware of the aesthetic impact of this kind of siding job. Preservationists warn of the damage caused by unobserved water leaks between original wood siding and an enveloping plastic skin. However, the greater damage is usually to the architectural appearance of the house. Some installations shave off a great deal of detail in order to make the new siding lie flat. You never know until you pull it off just how much damage has been done. 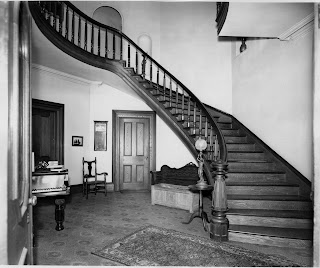 Here's the main staircase at Lynfeld as it appeared in 1925. Pretty showy for an upstate farmer, right? It survives as part of the largest of the three rental units occupying the house today.
Posted by John Foreman at 2:58 PM