A fine old house in Millbrook 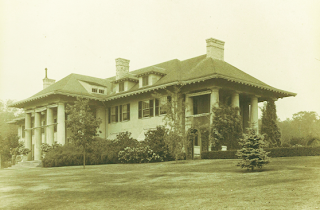 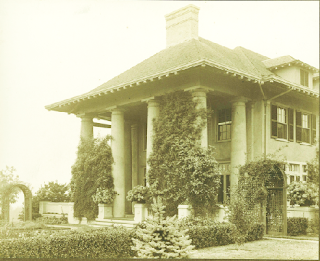 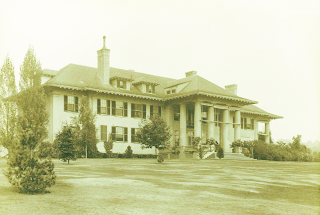 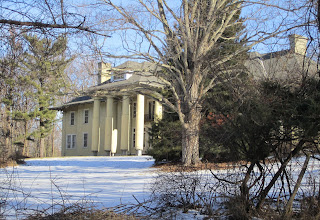 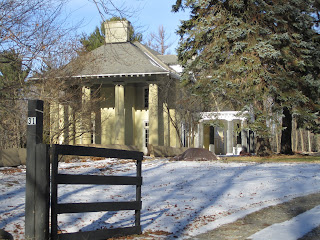 "Caradoc" was built in 1902 by the President of the Chicago, Milwaukee and St. Paul Railroad, a man named Roswell Miller. It speaks to the Gilded Age "chic" of Millbrook, a smart little village in the gentle hills of Dutchess County, New York, that Miller would build here. His son, Roswell Miller Jr. eventually married Andrew Carnegie's daughter, Margaret, and built another fine house nearby.

"Caradoc" is an odd name for a country house, odder still considering the myth from which it comes. Caradoc was the name of the Chief Elder of King Arthur's Round Table, a man abused by a traveling wizard into thinking a sow was a beautiful woman. While sinning with the pig, the wizard impregnated Caradoc's wife. Years later Caradoc discovered the true paternity of his boy, at which point father and son hatched a preposterous plan to give the wizard a dose of his own porcine medicine. Unsurprisingly, there were consequences to disrespecting a wizard. Cutting to the chase, Caradoc Jr. did manage to disentangle an enchanted serpent from his arm, but only at the cost of leaving the arm itself withered, and accidentally cutting off his bride's left nipple. It's complicated, as must be the reason for the President of the Chicago, Milwaukee and St. Paul RR to name his house after these people.

Miller's wife survived him by decades, dying on Christmas Eve, 1955. Six weeks later a local restuaranteur bought the house on 57 acres for the grand sum of $35,000. He subdivided the estate - none too gently, alas - leaving the house on what would eventually boil down to a 4-acre island in the middle of a new horseshoe-shaped road. The route of this road owed more to utility than aesthetics, but interestingly, almost no new structures have been built on the estate since the late 1950s. The main house bounced through a dozen or so hands - suffering considerable hard use and neglect in the process - before the current owner bought it in 2003. A slow restoration is now under way. The original design firm, Shepley Rutan and Coolidge of Boston, MA., provided the wonderful vintage images of the house with original landscaping.
Posted by John Foreman at 9:34 AM 16 comments: 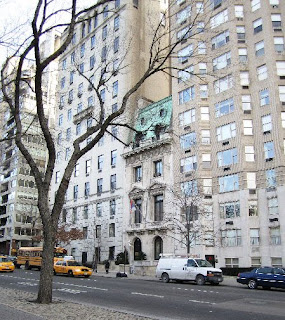 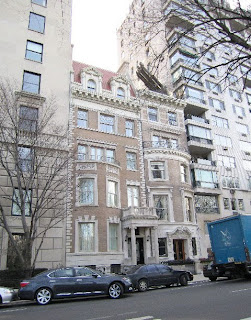 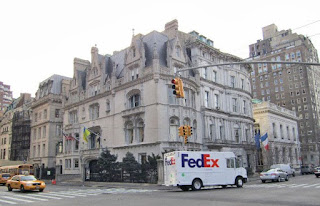 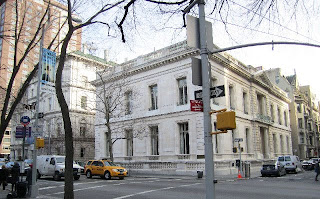 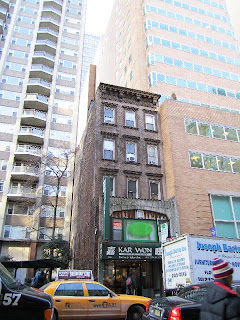 We are all survivors, to one extent or another. The same applies to our houses. A person's house is probably the single most eloquent and meaningful symbol of what that person is all about - aesthetically, culturally, economically, socially, you name it. Ever since the 17th Century one Manhattan neighborhood after another has been wiped out of human consciousness, but there are always brick and mortar survivors. Here are a couple of unheralded favorites in my Upper East Side neighborhood.

Image 1 - In 1900 the Vanderbilt family owned 8 houses on Fifth Avenue in the 50s. Local wags called that stretch of the Avenue "Vanderbilt Alley." By the eve of the Stock Market Crash, all of them were gone but one. Emily Vanderbilt Sloan White was among those who fled the commercial invasion, in her case to this fine limestone house between 66th and 67th Streets. When Mrs. White arrived, the block was a quiet stretch of private houses, much as Fifth Avenue in the 50s had formerly been. Vanderbilt Alley was a neighborhood of family members, and up here Mrs. White enjoyed an approximation of those good old days. The house next to her on the south belonged to her nephew, J. Watson Webb. The one next to him was that of his maternal grandparents, Henry and Louisine Havemeyer. This upper crust family coziness crumbled soon enough to the northward march of real estate development, this time in the form of apartment towers. The building on the right of the photo, on the site of the Webb and Havemeyer houses, is called 1 East 66th St. It is a favorite of New York society types and a beautifully run building, although not one of great architectural interest. Mrs. White's house was for many years the Yugoslavian Mission to the UN. The Serbian government occupies it today.

Image 2 - Most of Fifth Avenue in the 60s and 70s is a long wall of post-World War II rental buildings, converted in subsequent years to coops. Sandwiched in the middle of the block between 73rd and 74th Streets is this pair of unheralded old houses. They are not among the greatest of Fifth Avenue palaces by any means, but they are gracious and luxurious in a low profile sort of a way. I don't know why they appeal to me so much, but they do. The one on the right has always been a private house; its neighbor to the left was recently converted back to single family use.

Images 3 and 4 - All of Fifth Avenue from Central Park South to 90th Street used to look almost exactly like this virtually intact block between 78th and 79th Sts, and Fifth and Madison Avenues. How it is that one entire block could survive like this is truly a mystery. It is also a mystery why it has been specifically excluded from the Upper East Side Historic District. That magnificent Louis XVI style free-standing palace on the corner of 78th and Fifth is the James B. Duke house, now the property of New York University. The Gothic chateau of the late Rutherford Stuyvesant on the 79th St. corner is now a Ukranian cultural institute. The Payne Whitney house, in between them and next door to the Duke place, belongs to the French government. The house between it and the old Stuyvesant place is one of those mysterious private mansions on Fifth Avenue that nobody knows anything about and almost nobody even notices.

Image 5 - I love the fact that this little brownstone on East 60th St between Park and Lexington is still here. Well, it's "little" only in comparison to the ginormous skyscrapers hemming it in on both sides. When built, it was a brownstone of some pretense, part of a terrace of identical house stretching in either direction, It would have sported a wide stone staircase up to big iron and glass doors, beyond which was a hushed and darkened interior of plush furniture, potted palms and deep tone mahogany. Despite radical alterations, it remains a provocative glimpse of an otherwise vanished past.
Posted by John Foreman at 1:11 PM 4 comments: 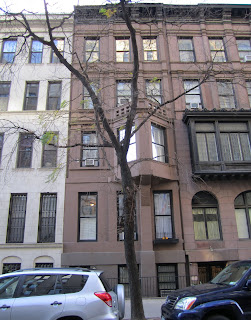 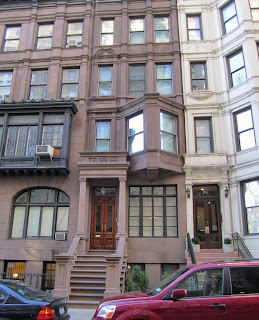 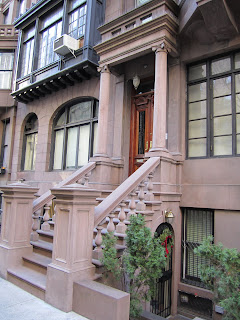 It is a cruel truth that poverty is among the best tools of architectural preservation. People who are too poor to mess a house up usually just leave it alone, while their richer neighbors embark on any number of aesthetically awful projects. Happily, things have changed. The rise of the preservation movement has increased consciousness across the board - including that of new owners of old houses that have have been wounded in the past.

Image 1 - This house on East 64th St. is one of a row of spec-built brownstones from the late 1860s or early 1870s. The original high stoop was torn off when it was converted to apartments. The purpose of a high stoop was to give family members a formal entrance to the parlor level of their house, while providing servants with a humbler entrance to the kitchen level below. When the stoops were demolished, the original entry halls and foyers on the parlor level were typically converted into tiny bedrooms for new parlor level apartments, while the old servants' entrance became the new front door to a multi-family building.

Image 2 - Here's a house a few doors to the west that once looked virtually identical to Image 1. As part of its reconversion to single family use, an historically accurate stoop has been reconstructed. Boy, does it look great, and not just because it's well detailed, but because it balances the composition of the facade. I'm not so sure about that window on the parlor floor, added from the look of it sometime in the mid-20th Century. The new owners presumably love it. 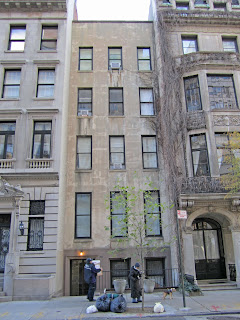 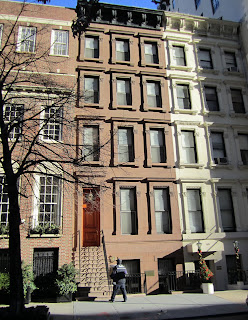 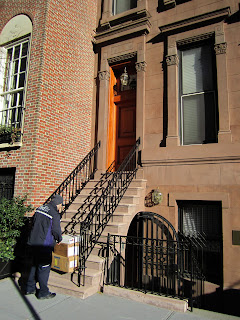 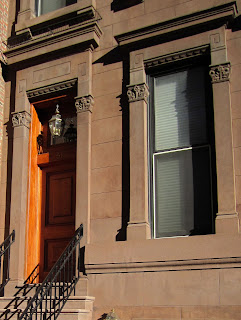 Image 1 - When built in the 1870s as one of a row of identical speculative brownstones, this building on East 67th St. had an obligatory high stoop, elaborate cornice, and heavy stone window surrounds. It was probably altered sometime between the late 1930s and the 1950s. The alteration is an example of the worst thing that could happen to an old brownstone house - all architectural detail stripped away in the name of "modernism." Smooth surfaces don't age well in urban environments. What somebody once envisioned as "clean" and "uncluttered" usually winds up looking shopworn and just plain dirty.

Image 2 - This house, located a few doors to the east of Image 1, was originally identical to it. Sonewhere along the line - probably when the last single family moved out and it was converted to apartments - it lost its high stoop. In recent years, it's become a private house again, had its facade beautifully restored and a new high stoop constructed to replace the missing original.

Image 3 - Here's a closer look at the stoop, which should be compared to the one on 64th St. Someone's heart was in the right place but the proportions - of the stair itself and of the front door - are not successful.

Image 4 - The facade restorer really did a beautiful job, at least from the standpoint of workmanship.
Posted by John Foreman at 7:03 AM No comments: 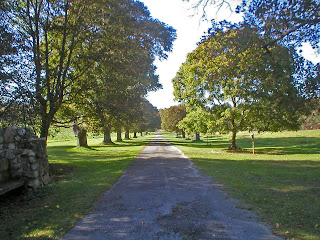 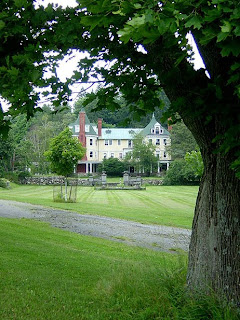 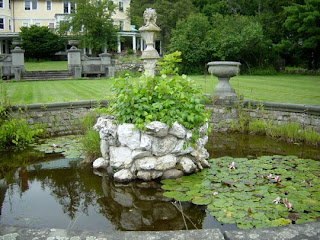 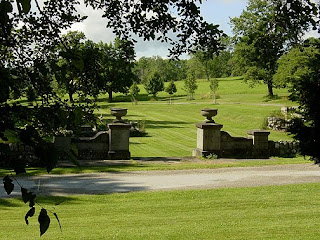 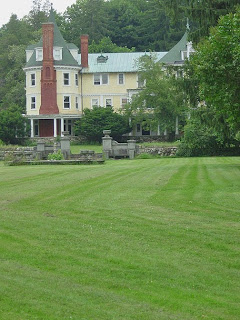 It's winter now. The leaves are down and the hills are gray, and it is beautiful in the country. But today I'm dreaming about my summer lawn - velvety, emerald green, lush and damp, and very big. I'm a lawn man. (And no, I don't mow it myself).
Posted by John Foreman at 6:12 PM 3 comments: