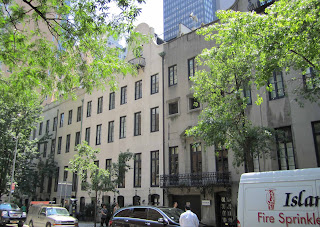 In 1919, a woman named Charlotte Hunnewell Sorchan, later Mrs. Walton Martin, began buying high-stoop, beat up, late 1860s era brownstones on East 49th Street between Second and Third Avenues. She renovated them all in the early 1920s, and here's what they look like today. 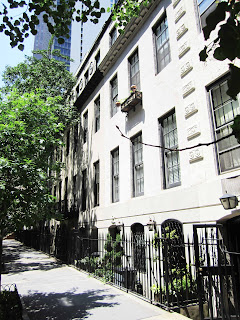 She bought another string of them on East 48th Street, renovated them too, and this is what they look like today. Brownstone as a facade material had become rather hated by Mrs. Martin's time, as had the high stoops of the Victorian period, so she covered the former with light colored stucco and tore the latter off altogether. When she was finished, she had a complex of 20 houses - individual in detail but coherent as a stylistic group - with 20 contiguous backyards. 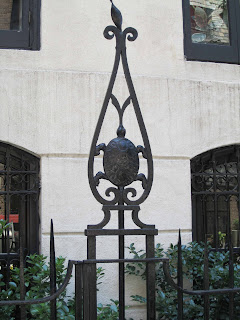 She called her little complex Turtle Bay Gardens, commemorating a vanished colonial era feature of the East River shoreline. By the 1920s this part of the East 40s was pretty grim. Residential fashion - not that there had ever been much of it around here - had long ago migrated north, elevated railroads thundered up and down both Second and Third Avenues, and acres of factories befouled the nearby waterfront and dirtied the air. A similar environment had failed to discourage Anne Vanderbilt, Anne Morgan and Bessie Marbury from pioneering Sutton Place, however, and Charlotte Hunnewell was evidently made of the same stuff. 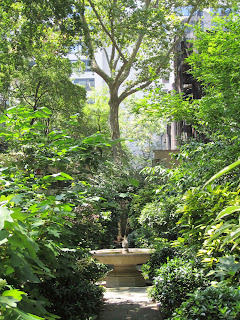 Sutton Place, though not quite as recherche as it once was, remains today on most people's radar as an upscale residential enclave. Turtle Bay Gardens was once its equal, thanks to a magnificent shared central garden. Every house gave up a bit of its individual back yard in order to create a central esplanade, one ornamented with specimen trees, plantings, fountains, statuary, and accessible only to those houses that backed up against it. Talk to most people under the age of twenty-seven and chances are they've never heard of June Havoc or Tyrone Power, Dorothy Thompson or Henry Luce, E.B. White or probably even Katherine Hepburn. It won't mean much to tell them that all of these forgotten celebrities once lived on the Gardens, but they did. 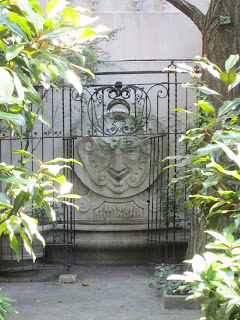 This fountain, at the east end of the esplanade, is a fitting terminus for an afternoon stroll.
Posted by John Foreman at 7:53 PM