Here's "Aphrodite," Col. Oliver Hazard Payne's famous yacht, anchored in front of his summer house at Esopus on the Hudson. The former Payne estate is located south of the city of Kingston, almost opposite the Vanderbilt Mansion in Hyde Park. Aphrodite was aptly described as a "sea palace." She measured 260 feet at the waterline, 330 feet from bowsprit to stern, and the top of her mainmast towered a full 136 feet above her baseline. Launched in 1898, Aphrodite cruised to the Mediterranean every year until the First World War. This is the sort of millionaire's yacht that had marble fireplaces, walnut paneling and gilded wall sconces. There were a number of them back then and inside, at least, they looked very much like Fifth Avenue mansions. Payne's mother was related to Oliver Hazard Perry, the hero of Lake Erie in the War of 1812. 19th century plutocrats loved to saddle their children with the names of distinguished relatives. One of August Belmont's sons was named Oliver Hazard Perry Belmont. 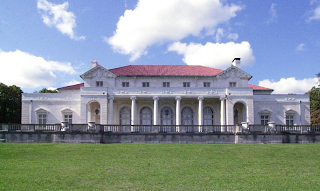 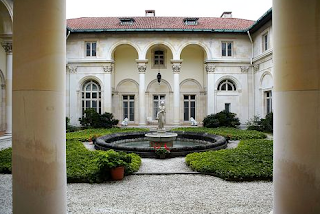 The celebrated New York firm of Carrere and Hastings (New York Public Library, Frick Museum on Fifth Avenue, etc.) designed the Payne house around a central courtyard, reportedly an homage to the client's happy memories of Italian travels. That client was a ruthless sort, in business and in personal life. Payne was a Civil War hero who, despite having the money to buy his way out of the army, chose instead to fight for the Union cause. He was seriously wounded at Chickamauga, recovered, returned to the battlefield, and left the service with the rank of brigadier general. For reasons unknown (at least to me) for the rest of his life he chose to be known as Colonel Payne. After the war, Payne went into the oil business, was bought out by John D> Rockefeller, and eventually became a principal stockholder and treasurer of Standard Oil of Ohio. In time Payne became a hugely rich investor with interests in everything from the the American Tobacco Company to U.S. Steel. He never married, but used his money instead to bribe and bully his family. 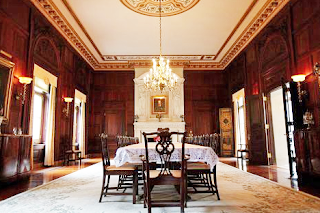 Here's the dining room, a dusty shell when I was there in 1985, now a glittering testimonial to the benign combined effects of good taste and a lot of money. At the time of my visit, a handsome, charming, admittedly sketchy - and alas, now deceased - friend was pretending to live there with a confused bride. Maybe it was just me who was confused by what these two attractive but wholly mismatched people - he was gay; she was terminally ill - were doing there. I guess they were playing house, something I've done myself. The marble facades of their 42,000 square foot love nest were spalling off at an alarming rate. The Marist Brothers, who had only recently vacated, had dealt with the problem by affixing aluminum siding to the affected areas. Not quite your Dept. of the Interior recommended historic preservation guidelines. Still and all, the house was pretty gorgeous and, as has been noted in the past, I have a taste for magnificence mixed with a bit of dilapidation. To return to Col. Payne, it is to his credit that he was a significant philanthropist. His money went to all sorts of educational institutions from Hamilton College to Yale University to Philips Andover Academy. Also, and unexpectedly, he left the Cleveland Jewish Orphan Asylum a whopping $200,000. It should be noted that this was an era of ugly antisemitism, especially in the high social circles in which Co. Payne traveled. He may have brazenly purchased Ohio's US Senate seat for his father, and so disapproved of his brother-in-law William C. Whitney's remarriage that he told Whitney's kids they would benefit from his (Payne's) will only if they repudiated their father, but at least he wasn't a bigot. 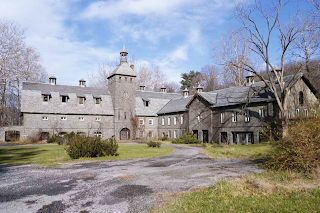 Payne's Esopus estate had the obligatory farm and stable complex, which was every bit as grand as one would expect. When the colonel died in 1917, he left his winter residence, a plantation in Georgia called Greenwood, to Payne Whitney, the New York nephew who deserted his father for his uncle's inheritance. His estate at Esopus was left to another favorite nephew, a man named Harry Payne Bingham. In 1933, Bingham donated the property, which he had hardly ever used, to the Episcopal diocese of New York. In 1937, the house and farm became the Wiltwyck School for Boys, Wiltwyck being an antique name for nearby Kingston. In 1942 the property was divided, the school moved entirely to the farm, and the mansion became a Marist Brothers retreat house. The Wiltwyck School had a short (44 years), hopeful, and ultimately rather tragic history. Back in the 1930s, family Court in Manhattan made no provisions to follow up or help impoverished black kids who acted out and got caught up in the system. Wiltwyck was the result of efforts by Justine Wise Potter, the first woman justice in New York State, social worker Esther Hinton, and First Lady Eleanor Roosevelt to create a place that actually cared about these kids. Johnny Carson and Harry Belafonte were passionate supporters and fund raisers. The school closed for lack of funds in 1981 and its ghostly former campus is again on the market for sale. The mansion has, courtesy of its last owner, cycled back to the Marists. It is now the Raymond A. Rich Institute of Marist College in Poughkeepsie, dedicated to "developing the communication, interpersonal, and social skills necessary to lead complex organizations in a global setting." (Phew!)
Posted by John Foreman at 7:09 AM