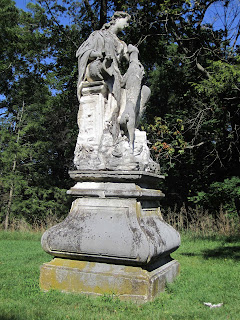 Would that I could live in a house that had statues like this dotted around the premises. Admittedly, the lady looks a little vacuous (or perhaps just over-lichened), but her dog is so elegant. They're standing in an irregular grassy patch immediately north of the house, and whatever once surrounded them has vanished without a trace. 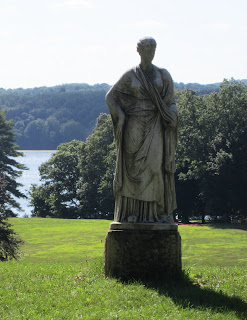 Was this Roman patrician intended to face away from the view, or has the State of New York pivoted her for reasons known only to itself? 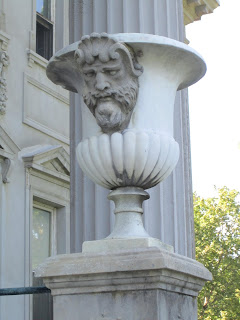 This sort of stuff plucks at my heartstrings, even though at this point in my life I'll probably never live in a house with urns like this out front. (Actually, I do have urns in front of my house; they're just not as grand as these). 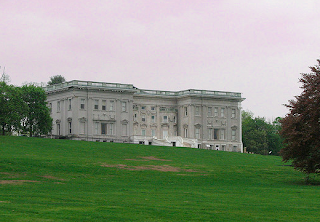 Here's the house from the river - grand, but kind of severe. I do not know what it looked like when the Mills were here, but I'll bet this prospect was softened by clever landscaping, maintenance of which has been beyond the abilities of the State of New York. Notice anything at the left end of the cornice facing the river? 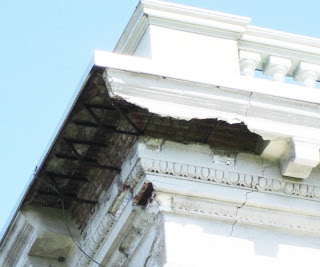 I'm very fond of this house but let's be honest, it was not built for the ages. At first glance, most people assume it's clad in limestone or marble. Not so. The walls are brick overlaid with wire mesh onto which stucco - meaning layers of fine cement - has been applied by hand. What look like carved stone architectural elements - moldings, brackets and so forth - are all made out of stucco too. In the case of this section of cornice, the projecting shape is not a function of a piece of stone but has been created by means of projecting metal brackets whose wire mesh has fallen off with the missing stucco. At one point the State sprayed the whole building with gunnite, being cement forced out of a hose at high speed, giving the place an unfortunate batter-fried look. 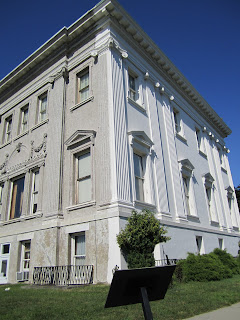 The Staatsburg State Historic site is trying its best to remedy the sins of the past by restoring the facade to its original appearance. So far they've done one elevation.
Posted by John Foreman at 12:19 PM