The rhythm of the seasons, the structure of a narrative, and the progress of life itself follow the same basic pattern: there is a beginning, a middle, and an end. Not coincidentally, it is a canon of classical architecture that a building elevation has three parts as well: a bottom, a middle and a top. A well designed wall is said to be treated as an order, which means it's designed in a manner similar to that of a classical column. The three orders of classical columns - Doric, Ionic and Corinthian - are differentiated by the capitals on top, but each has the same basic tripartite structure, which the Western eye has been culturally acclimated to seek since Antiquity. 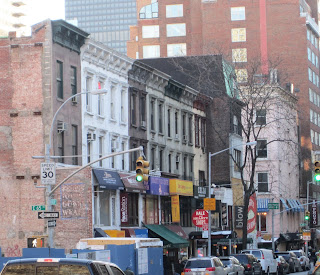 Even this row of modest, post-Civil War, middle class houses on Lexington Avenue - whose anchoring stoops were long ago replaced by store fronts - reflects the aesthetic imperative of a cornice on top to complete the composition of the facade. 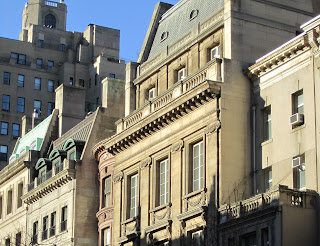 These houses on East 64th Street off Fifth Avenue are grander, but their facades are still balanced by variations on the cornice. 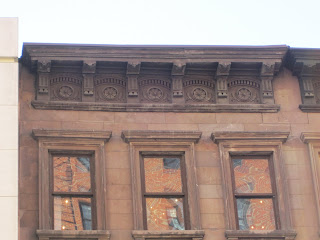 A lot of us, walking around the city streets, don't even look at cornices. They are an often unremarked, unrepaired, and unnoticed part of the cityscape. 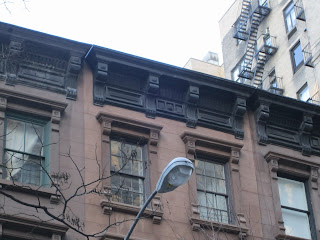 Some enlightened souls, like the owners of this house on East 63rd between Madison and Park Avenues, have recreated a missing cornice by exactly copying those on the contiguous buildings. This particular cornice was installed only two years ago, but few passersby would be able to tell it wasn't original. 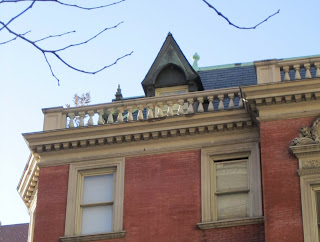 Even when the cornice is a balustrade, as it is on this Madison Avenue manse, its function is the same: to complete the tripartite composition the Western eye demands. Much modern architecture either rejects outright or considers unimportant this basic architectural tenet. This is why some of us find many modern buildings exciting initially, but oddly unfinished and eventually boring.
Posted by John Foreman at 2:05 PM