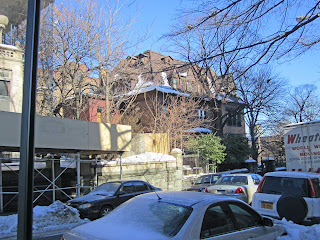 If the Bailey house is not well known, the house next to it is even more obscure. Somehow or other, this old brick mansion has clung to its corner lot at the foot of 150th Street, gazing from a clifftop perch above Colonial (now Jackie Robinson) Park to the hills of High Bridge in the Bronx. 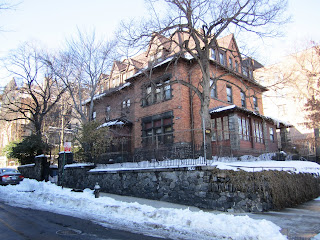 It's not a great house perhaps, but it's the sort of big old pile that people come to love. It's roomy and solid, full of personality, and it hunkers down reassuringly on the corner of West 150th St. and Edgecombe Avenue. According to the landmarks plaque out front, it was designed in 1890 by William Schickel for an importer of religious books named Nicholas Benziger. Eloquent of changes in the neighborhood over the last hundred years, it has since 1989 provided permanent housing for homeless adults. 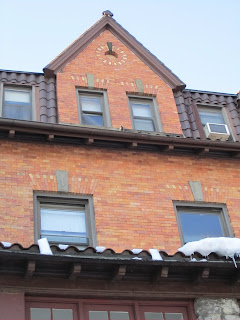 Here's a detail of the gable. These bedroom windows have the aforementioned view of the Harlem River and High Bridge, the latter neighborhood formerly filled with houses just like this one. Note Schickel's polychrome brickwork, an Arts and Crafts touch. 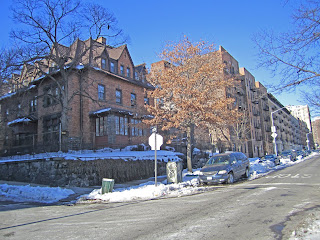 But for the Benziger house, the leafy suburban look of old Edgecombe Avenue vanished long ago. A great deal of residential New York City looks much like this - endless palisades of late 19th to early 20th Century 5- and 6-story apartment houses. They have eradicated the former reality of the streets on which they stand, rendering the past almost unimaginable.
Posted by John Foreman at 2:05 PM