A Mansion on Riverside Drive 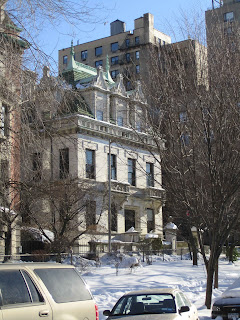 I've had free standing houses on the brain of late (see posts below), so here's another good one on Riverside at 107th. Somebody somewhere seems to think that Riverside, with it's magnificent water views, meandering roadbed and interesting topography, was once a competitor to Fifth Avenue. This notion ignores the principal concern of society people in choosing a place to live - namely, who's living next door. The Upper East Side was full of society people; the West Side simply wasn't. End of story. Some pretty nifty houses were built along Riverside, but with few exceptions they belonged to people like Morris Schinasi, the builder of 351 Riverside Drive. The Schinasi house was designed in 1909 by William B. Tuttle, a man who was not only an architect, but a talented cellist as well. In this latter capacity, Tuttle met and became a personal friend of Andrew Carnegie, who eventually hired him to design Carnegie Hall. Other Tuttle projects include the demolished Hammersley mansion on Fifth Avenue and 84th St., the Princeton Inn, the old Columbia Yacht Club and the First Baptist Church of Red Bank, New Jersey. Schinasi was an illiterate Turk who immigrated to America and became a cigaret mogul. At one time there was a Schinasi cigaret factory with 300 employees on Morningside Heights. Mr. Schinasi set himself up as a sort of Upper West Side pasha, complete with marble mansion and 16-year old bride. Do we wonder why the "400" were nowhere near? 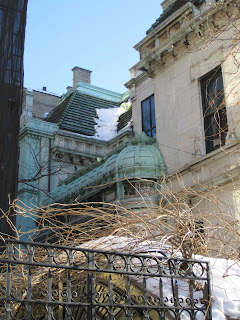 Here's a side view of what otherwise, had this not been a free standing house, would have been a blank party wall. You've got to love all this detail, not to mention the quality of construction. 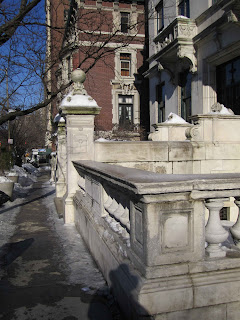 This is the railing in front of Mr. Schinasi's house. The house in the distance is actually the southern half of a double mansion between 107th and 108th. In 1930 the Schinasi house became a finishing school called the Semple School. In 1960 it was bought by Columbia University and at one point used as a childrens' day care center. 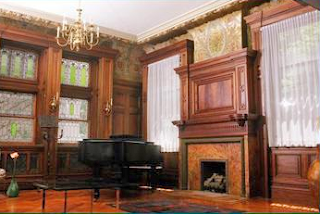 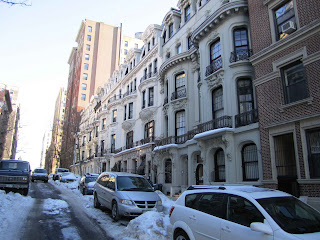 This is a terrace of houses on 105th St. just off Riverside, built around the same time as the Schinasi house, and very typical of this neighborhood. They have a sort of Parisian feel to them, don't you think? Although to be honest, I'm not really sure what part of Paris they resemble.
Posted by John Foreman at 3:32 PM