We like to think we have the biggest and best of everything in New York. However, where big old houses are concerned, European cities have us whipped. Here are a few in London - and they're not even palaces - submitted to keep us humble. 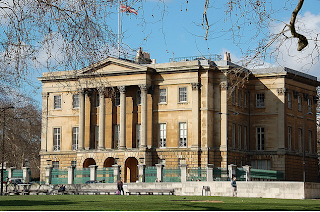 This is Apsley House, located on Hyde Park Corner at 149 Piccadilly, and originally known by the wonderful address of No. 1, London. Designed by Robert Adam, this house was built between 1771 and 1778 for Baron Apsley, Earl of Bathurst. In 1807, Richard Wellesley bought it, and after his death in 1817 his younger brother Arthur moved in. Arthur Wellesley is better known - at least to us Yanks - as the first Duke of Wellington, vanquisher of Napoleon at Waterloo. He was the man who in 1828 tacked on that magnificent Corinthian portico. The Wellesley family gave the house to the nation in 1947, on condition they be allowed to occupy the second floor for as long as there is a Duke of Wellington. It was called No. 1, London because it was the first residence after the Knightsbridge toll gate. 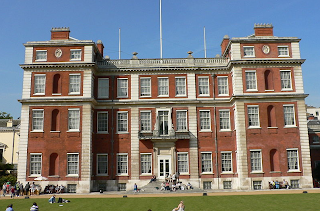 Here's Marlborough House on Pall Mall, designed by Christopher Wren in 1711 for Sarah Churchill, Duchess of Marlborough, and taken over by the crown in 1817. Marlborough House became a center of fashion in 1863 when the Prince of Wales (the future King Edward VII,'Bertie' to his friends and intimates), enlarged it and moved in with his wife Alexandra. It glittered until his accession to the throne in 1901. In 1953 the present Queen Elizabeth gave it to the Commonwealth Secretariat, which continues in residence today. 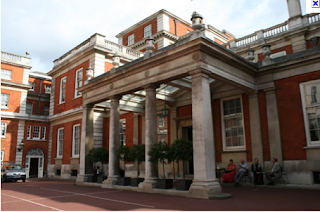 Here's the entry facade of Marlborough House. What a good looking place this is. One can just imagine all of Bertie's good looking friends climbing in and out of gleaming carriages and walking in this door 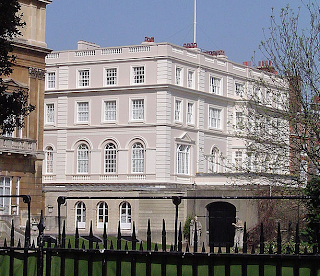 Here's Clarence House on the Mall, designed by John Nash in 1825 for the Duke of Clarence (later William IV) and now the London residence of Prince Charles. In 1840, Queen Victoria's mother, the Duchess of Kent, moved in and remained here until her death in 1866. 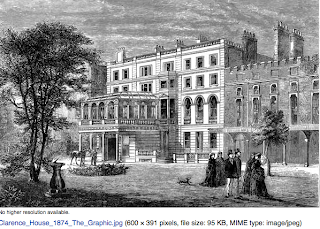 I thought this was an interesting shot of Clarence House in the mid-Victorian period. Nash's building is still mostly here, beneath a superimposition of "architectural doilies." Prince Albert, younger brother of the Prince of Wales (the future Edward VII) was in residence at the time of this view. After he died, a succession of royals occupied the place until 1942 when Princess Elizabeth (the present Queen) took over. Shortly after that the house was hit by Nazi bombs. When Elizabeth became Queen in 1953, her mother (widow of "King's Speech" George VI) moved into a restored - really rebuilt - Clarence House. If anything had been missed in that renovation, it was put to rights in a total overhaul in 2002 when the current Prince of Wales moved in.
Posted by John Foreman at 2:42 PM