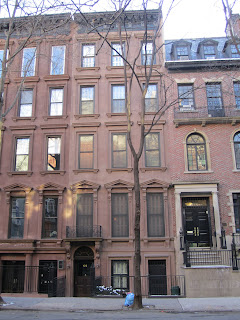 This handsome old house on East 65th St. looks to me as if it was renovated just before WW I. I'm guessing a sophisticated new owner pulled the stoop off, reused some of the original architectural elements for a new front door (stoops by then being out of fashion), created a better proportioned front room on the parlor floor, a renovated kitchen on the garden level in the front, and a new formal dining room overlooking the garden in the back. The house looks good, but slightly top heavy. 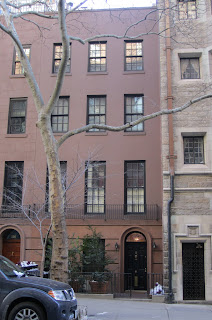 Until the Civil War period, undeveloped Jones Wood, stretching from the East River shoreline into today's East 60s, was a famous resort for picnicking Manhattan day trippers. Had the owners not been such hard nosed negotiators, Central Park itself might have been located here. Since the 1920s, six brownstones on East 66th St between Lexington and Third Avenues, and another six on the same block of East 65th - together with a divine private garden shared by all twelve house - have been collectively known as the Jones Wood Association. The house above, on 66th, is typical of the Association houses, all of which are single family. It is very pretty, although it looks like somebody stole its toupee. 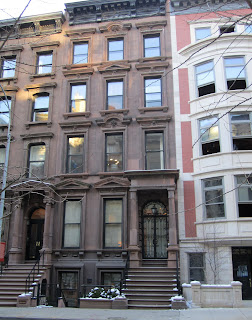 This fine brownstone mansion on East 63rd off Fifth Avenue looks "right" because it has a beginning (an anchoring stoop at the base), a middle (harmoniously related windows on the shaft) and an end (a cornice up top that finishes the composition and assures us that the building is complete).
Posted by John Foreman at 1:07 PM