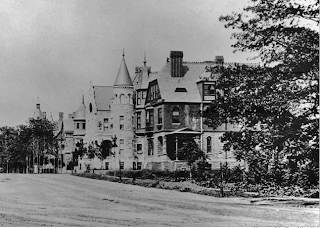 There are plenty of old free standing houses in the five boroughs of New York, but not so many on Manhattan. Some - like the Frick and Carnegie mansions on Fifth Avenue - are famous, but I wanted to dig up something obscure for my blog. The image above was taken in the early 1890s on a Harlem street called St. Nicholas Place. It's hard to see, but West 150th St. intersects St. Nicholas Place at about midpoint of this view. These streets were laid out on a hill above Harlem in a district that, during the Harlem Renaissance, came to be called Sugar Hill. In 1900 you could see the same sorts of bulky free standing mansions on the streets of Rochester and Cleveland, Boston and Pittsburgh, Detroit and Chicago, and in New York along parts of Fifth Avenue or Riverside Drive. Over the years almost all of them were torn down and replaced with apartment houses. "Free standing" came to convey an image of considerable luxury - read that, a lot of space. In 1888, the man who created the "Greatest Show on Earth," Barnum & Bailey's James A. Bailey, built the limestone house with the conical tower at No. 10 St. Nicholas Place. You can see it slightly to left of center above. New York society, we should note, wouldn't have been caught dead this far north on Manhattan, but the merely prosperous liked the big lots, sometimes with big views, on roads that at least were traversed by the smart set in their expensive coaches. The architect of the Bailey house was Samuel B. Reed, a mid-Victorian practitioner whose opus was much maligned by subsequent generations. 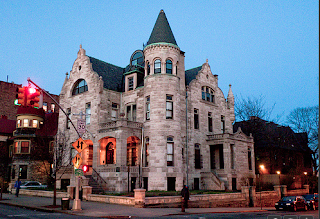 Here's a relatively recent view of 10 St. Nicholas Place, taken before a fire in 2000. Happily, the fire didn't do much damage, and practically none to the exterior. The neighborhood today is no longer one of spacious Victorian mansions. In fact, almost from the moment he moved in, Bailey lamented its invasion by apartment houses. His mansion today stands in the middle of a tiny island of old houses whose survival defies both logic and probability. Bailey stuck it out on St. Nicholas Place until 1904, when he moved to Mt. Vernon, New York. For much of the 20th Century, the house was a funeral parlor. It stood derelict for 9 years after the fire. 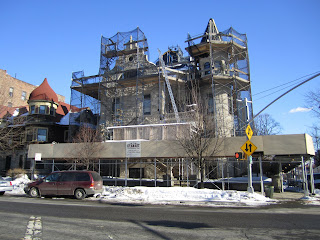 In 2007, 10 St. Nicholas Place was put on the market for $10 million. Two years later it closed for $1.4 million. Some wondered whether the new owner would - or could - undertake the considerable restoration. This is what it looks like today, so presumably the answer is "yes." 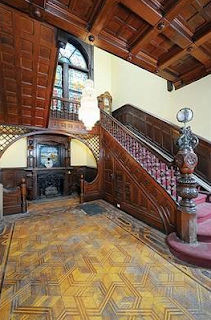 According to the reports I read, the fire didn't do a lot of damage but in the course of putting it out a lot of windows were broken. Why they were allowed to remain broken, I don't know. But they were. Result: horrible water damage throughout the, until then, amazingly intact interior. Here's a shot of the main stair, minus Vivian Leigh and Clark Gable. The damage isn't so visible on the lower floors. 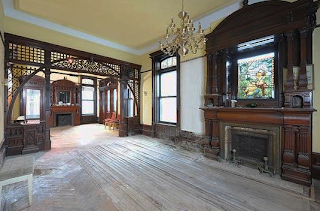 The water damage is more obvious in this view. How about all this original detail? You don't have to like it to admit it's pretty amazing
Posted by John Foreman at 2:37 PM