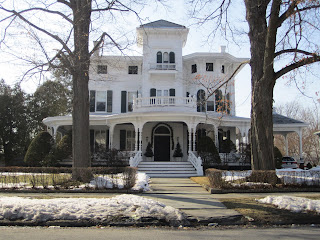 Garfield Place and Academy Street have the most consistent upscale nineteenth century streetscape, but fabulous houses are scattered elsewhere. This one is on South Hamilton, a street that has otherwise not fared so well. Across from the house above is a rambling old manse that has been stripped of its porches and detail work, slathered with awful new siding and retro-fitted with ill-proportioned replacement windows. Such has been the fate of many Poughkeepsie houses. 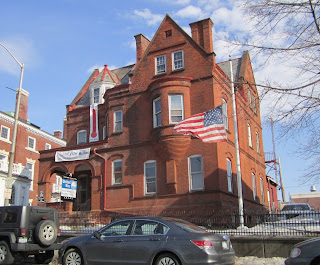 This old Queen Anne pile is on Market Street, a block from the eastbound arterial. The location is just about the bulls-eye center of town. I'd date it somewhere in the 1880s or '90s, built for some nineteenth century Poughkeepsie big bug who liked being noticeable. 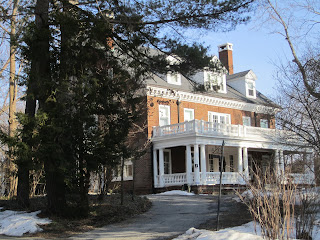 Hooker Avenue, presumably named after the Civil War General, marks an imprecise dividing line between beat-up Poughkeepsie to the north and architecturally distinguished residential areas to the south. Hooker itself has a number of exceedingly fine old places, like this early twentieth century Georgian Revival manse on a spacious wooded lot. 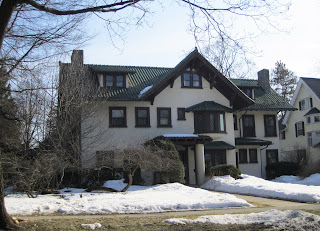 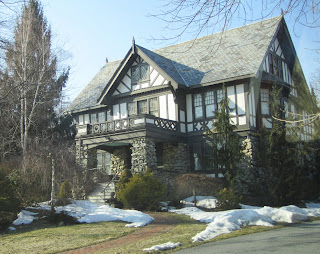 The area south of Hooker Avenue is a tangle of tree lined subdivision streets, dating mostly from the first decades of the twentieth century. Parts of this neighborhood are simply pleasant; others are quite distinguished. The Arts and Craft and Tudor Revival houses above are good examples of the latter. The streets on which they stand are beautifully maintained and, now that the trees and plantings are fully mature, probably look better than they did in 1920. I can't help asking myself who lives in these houses? Old families? Newcomers? And if the latter, why are they here in Poughkeepsie?
Posted by John Foreman at 1:21 PM