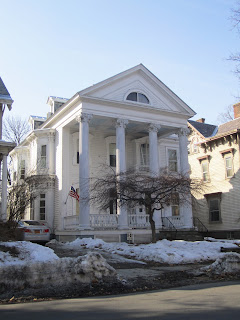 After Garfield Place, Academy Street a block away is considered by the locals to have the city's best preserved - and best looking - nineteenth century houses. They are in a dizzying variety of styles, which was typical of the period between the Civil War and the beginning of the twentieth century. The classical double-height columned porch above is imposing, but it doesn't disguise what is really just a capacious old Victorian house behind it. 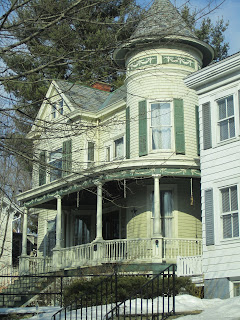 The lots aren't big on Academy and the houses sit in close proximity. Fortunately, the great majority has not been ruined by clumsy modernization. Academy is architecturally consistent overall and definitely good looking, but a recent inspection revealed much peeling paint and a lot of "For Sale" signs. (Uh, oh). 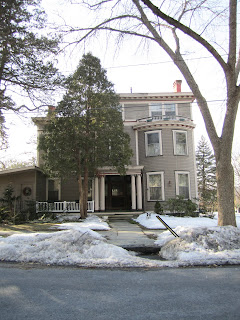 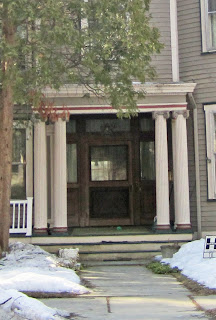 I'm a sucker for this kind of house, actually on Garfield Place. It's got a lot going on - a bit of bow front Georgian, a dash of Italianate, some classical revival columns, and heaven only knows what's inside. I'll bet there are big airy rooms on the main floor, probably with knock-off Adam mantlepieces and, if they've survived, brilliant old bathrooms with giant white fixtures. Sounds like heaven to me. I love the front door too. How much could a house like this cost in Poughkeepsie? What would it be like to live here? 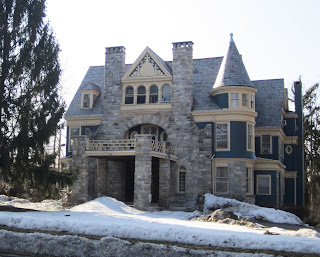 The southern end of Academy used to lead into in a region of suburban estates, now mostly replaced by apartment buildings and shopping malls. Houses at this end were newer, as is the case with this late Victorian chateau. I'd guess it was built sometime around 1900, maybe a few years earlier. Today it's a condominium...with a banal apartment tower next door that does nothing for the otherwise historic look of the neighborhood.
Posted by John Foreman at 2:00 PM