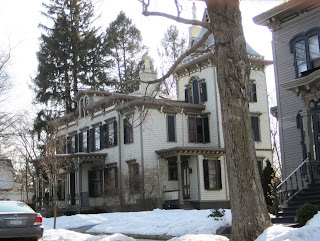 I spend my weekends in Millbrook, an attractive Dutchess County village located some sixteen miles - and about the same number of psychological light years - from the City of Poughkeepsie. From colonial times through the 1950s, Poughkeepsie enjoyed a prosperous diversified economy, a handsome and historic built environment, and a scenic location between the beautiful Hudson River and the bucolic farms of Dutchess County. So, how did it go to hell so fast? I don't know. Ask the people in Newark, or Detroit, or Cleveland, or closer by in Newburgh or Hudson. By 1970, Poughkeepsie was on a steep downward spiral. It may have finally leveled out, or at least we hope so. Looking back, maybe nothing could have stopped the abandonment of downtown by retail shops and their relocation to the malls south of the city. Who at the time understood that "urban renewal" would destroy exactly the buildings most valuable for future rebirth? If they'd asked me, I would have told them turning Main Street into a grim pedestrian mall was a dumb idea. But they didn't, and it did.

For all the damage and poverty and despair of the last half century, Poughkeepsie remains a fascinating city, architecturally anyway. Like many old Hudson River towns, it is brimful of great old houses, albeit not always in neighborhoods we'd like to live in. I've been exploring the city for years, frankly amazed at all I've found. As far as big old houses go, the best street in Poughkeepsie is probably Garfield Place, illustrated above and in the four images that follow. 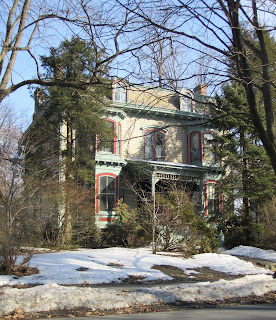 This house looks a little newer than the one above. That mansard roof says post-Civil War to me. 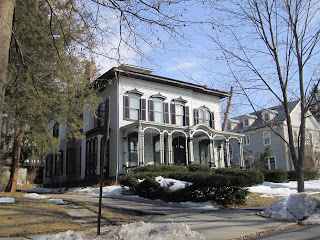 I'm guessing this house was built in the 1850s and enlarged after the Civil War. The porch and the extension on the right look to me like part of a renovation. 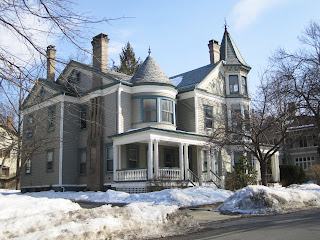 Victorian architects must have had fun slapping these places together. Pretty much anything went back then, and the results are nothing if not original. This one, by the way, is for sale. It's not the only one on the block, either. 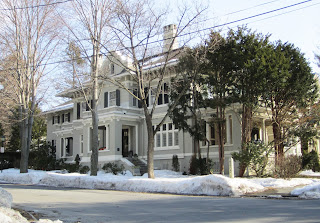 People were building houses on Garfield Place at least into the beginning of the twentieth century, judging from this stucco manse squeezed onto a corner lot that might once have been somebody's lawn. How would you describe a house with a Flemish gable, overhanging Italianate eaves, columned Neo-classical porches and Georgian massing? "I don't know if it's art," as they say, "but I know what I like."
Posted by John Foreman at 2:43 PM