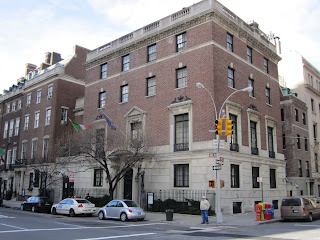 Remember Nikita Khruschev banging his shoe at the United Nations? Well, maybe you don't, since it was 51 years ago. The Soviet UN Mission back then was located in a McKim, Mead and White mansion built for banker Percy Pyne, and located on the corner of Park Avenue and 68th St. Khruschev, the avatar of Soviet proletarianism was, for the duration of his stay in New York, housed in precisely the sort of swank Manhattan mansion today's Russian oligarchs lust to possess.

The Russians eventually sold the place to a real estate developer who, despite having already commenced interior demolition, was happy to resell it suddenly and unexpectedly to the Marquesa de Cuevas. Talk about "deus ex machina." This lady, nee Margaret Rockefeller Strong, not only bought the Pyne house but also the adjoining house built for Pyne's son-in-law Oliver Filey. Both buildings are examples of about the best early 20th Century Colonial Revival design work in town. The Marquesa gave the Filey house to the Spanish American Institute, and donated the Pyne manse to her cousin David Rockefeller. He in turn gave it to the Center for Inter-American Relations.

The story of the eleventh hour rescue of the Russian Mission is pretty well known. Less known is the simultaneous rescue of the Filey house next door. Virtually unknown is anything pertaining to the other houses on that elegant block. So, in grateful recognition of my 22 followers, and of the average of 63 people who visit my blog each day, I'm going to tell you about the northernmost of the so-called Park Avenue Houses, the Henry P. Davison house at 690 Park Avenue, pictured above.

Henry Pomeroy Davison (1867-1922), largely self-educated and with no college degree, taught school in rural Pennsylvania at age 16, and was a Morgan partner in New York by age 41. I doubt many people have heard of him today, but he was a big deal guy in the early 20th Century. Davison was a founder of Bankers Trust Company, one of the organizers of the Federal Reserve, he administered a half-billion dollar Morgan war loan, and was President of the American Red Cross. During WW I, he raised a hundred million dollars in seven days for that charity; later in the war he raised another hundred and seventy million.

Davison was a member of top drawer clubs (University, Piping Rock, Jeckyl Island, to name a few), a force in local charities (Treasurer of the Museum of Natural History), and an all around high liver. Toward the end of the First War, he and his wife donated their house at 12 West 51st St to the YWCA and hired the society architectural firm of Walker and Gillette to build the mansion pictured above. The same firm designed the Davisons' country estate at Lattingtown, Long Island, called Peacock Point.

Walker and Gillette apparently had a penchant for East 69th St. Besides 690 Park (1917), they also designed 35 (in 1910) and 52 East 69th (also in 1917). Leon Gillette (1878- 1945) had the Beaux Arts training, working first for New York's Beaux Arts champions Warren and Wetmore before heading off to the Ecole itself and graduating in 1903. The firm did a slew of what we like to call "important" country houses - among them the Coe estate, now Planting Fields Arboretum out on Long Island, and five big houses in Tuxedo Park. Swanke Hayden Connell is Walker and Gillette's successor firm. 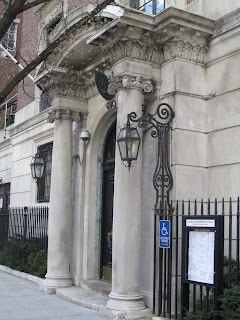 The front door to 690 Park. The building today houses the Italian Consulate. 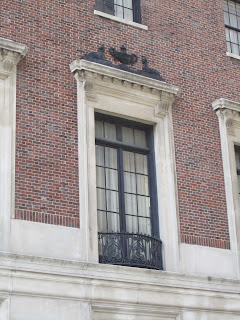 It gladdens my heart to see sophisticated attention to scale, proportion and detail as I do on this window overlooking 69th St. Ornate as it is, nothing's too heavy, nothing's too much. 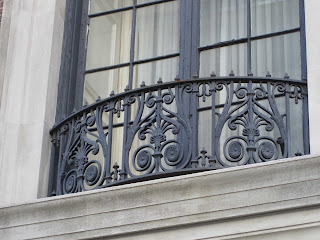 There's you and me and maybe a few others who look at things like iron balconies on windows, but what things of beauty they are - or can be. If proportion is indeed the "good breeding" of architecture - and I'm in full agreement with that statement - then the relationship between the heft of the iron railing and the size and shape of the window is crucially important to the aesthetic impact. This railing is just right. 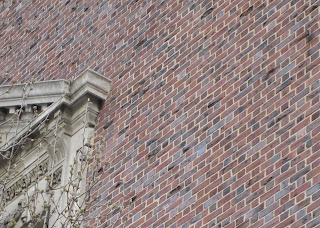 A lot of educated thought went into these brick walls, which combine all manner of subtle color and textural variations. The result is an impression of visual richness, even if the eye doesn't immediately recognize the source.
Posted by John Foreman at 12:05 PM