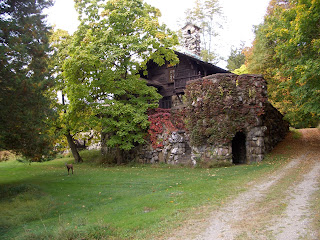 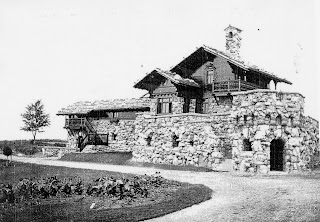 The Swiss Chalet bowling alley at Daheim, built in 1896, is a tour de force on several levels. Formal columns, bullseye windows, ornamental brackets, and crenelated battlements are all articulated with natural fieldstone, collected right here on the property by the Italian masons who built it. The superstructure above is made of gigantic dressed pine logs whose deep overhanging eaves are supported by massive scrolled brackets. German language exhortations to hard work and deserved recreation are chiseled into gable ends and along the balcony on the second floor. The roof was originally covered with huge boulders, placed for historical accuracy, or in the event of an unexpected Alpine blizzard. Horribly vandalized when I first came here, my landlords have restored it quite magnificently. It's like a gigantic Faberge egg sitting behind my house. Not really too useful; ask me how often I get the "yen" to go bowling. (Answer: not very often). But it is beautiful. Every big old house at the beginning of the 20th Century, that was worth its salt, had a bowling alley. Would that it were a swimming pool instead. Here's what it looked like in the late 1890s, and today.
Posted by John Foreman at 3:03 PM