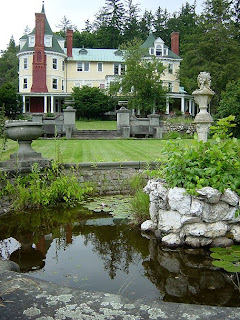 I've spent many nights alone in my house, and have never been afraid. It's like all old houses; it makes noises. As with bats, the best thing to do about late at night noises in old houses is pay no attention. The bats will dematerialize, in the way of bats, and the odd thumps and creaks will go away. too The sound of someone walking up the west staircase (there are 3 stairwells in the house) was reported by numerous guests over the years before I finally heard it myself. The west staircase is uncaarpeted and the sound of footsteps on painted wooden treads is distinctive. One woman many years ago claimed to have been awakened in the middle of the night by a wild-haired woman peering down at her in her bed. I tend not to believe stories like this, even though another guest reported waking up when the foot of her bed was lifted and shaken. These things only happen in one third floor bedroom on the back of the house. A corner of it is articulated by the square tower in the upper left corner of the close-up photo of the building exterior. As long as no one's in that room, we don't hear anything. If someone stays there, whatever it is keeps walking up the stairs, and sometimes scaring people.
Posted by John Foreman at 7:07 PM