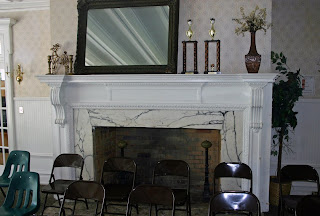 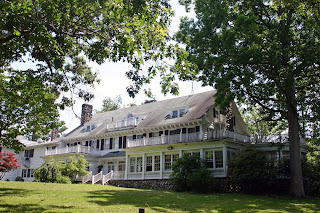 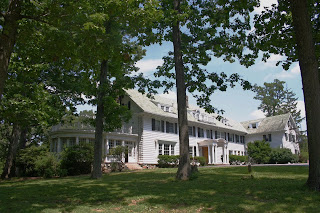 I used to belong to a loose and slightly squirrelly group of like-minded souls called the Mansion Maniacs. It was a diverse bunch to say the least, but we all had one thing in comon; a passion for big old houses. Making a field trip with a fellow Maniac to some magnificent and usually semi-ruined joint on Long Island, or New England, or Philadelphia was purest pleasure. I used to think of it as an Old House Fix. I had one yesterday, here in Millbrook. the house was a 1910 Colonial Revival built for the man who developed Woodmere, Long Island. In 1909, he made such a killing selling the town to speculators that he retired up here to live the life of a country gentleman. His house has been in institutional hands for half a century, and it shows. But boy oh boy, did I love this place. The rooms - like the 30' x 50' drawing room - are all grand and bright. The porch, at least before the forest grew back, had a Catskill Mountain view. The whole place is redolent with that signature early 20th Century air of settled luxury. How about those fiedlstone chimnneys too; I've never seen that particular detail on a house in this style. I love my house, which is about the same size, but this is my favorite style of architecture.
Posted by John Foreman at 5:52 AM