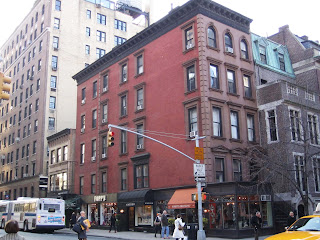 Here's a type of old house that happily has not vanished from our world. Variations abound in Harlem, inhabit great swaths of Brooklyn, and are found in abundance in many old American and English cities. I like this one for several reasons: 1) It's on a corner (70th and Lexington) in a neighborhood with very few surviving corner houses (this corner actually has one on all four points); 2) Despite the street level store conversions and the two bay addition on the left, it is remarkably intact (it brims with mid-Victorian gravitas); and 3) It was originally the end house in a row of otherwise identical late 1860s spec brownstones, and constitutes a wonderful contrast to the early twentieth century neo-Jacobean renovation next door, a house whose facade probably once looked exactly like it. 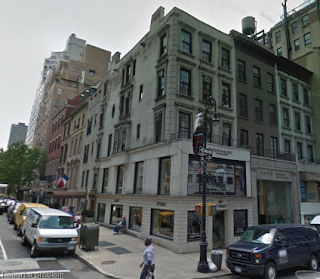 Here's another corner spec house from the same period, this time located on Madison and 67th Street. Basically, the same things were done here as on 70th, namely installation of street level stores and construction of an addition in the back. But hoo boy, talk about a heavy hand. You know, people just shouldn't paint stone. I guess brick is OK sometimes, but painted stone always winds up looking shabby - and not just after it weathers. For years some benighted decision makers at the Pierre Hotel have OK'd painting the limestone walls on the hotel's lower floors. If they think it looks good - even when it's fresh - they're extremely wrong. It looks like a cheap shortcut which, of course, is exactly what it is. I remember years ago the Metropolitan Club was painted too. Stripping it off and restoring the marble facades contributed in no small way to the club's social and financial renaissance. 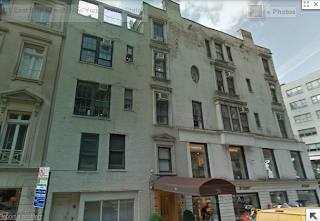 Here's 67th and Madison from the side, showing the addition quite clearly. Even the hugest mansions had a little room in the back. This particular house had a reasonably sized back yard whose frontage on the side street made an income producing addition irresistible. The big problem here, aside from the ill advised removal of the cornice, is the paint job. 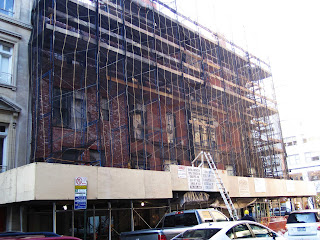 Lo and behold, look what's happening now. The building is swathed in scaffold and netting, beneath which the paint has been stripped and the stonework carefully restored. The bricks on the addition don't match the originals very well, an instance where painting is acceptable. 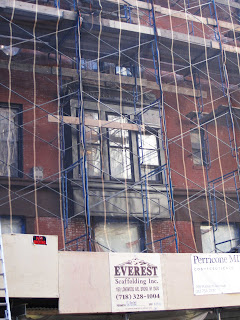 Here's a closeup of the view above, as much a testament to Photoshop as the work itself. When I snapped this picture, the black netting virtually obscured what was beneath it. Not now. (Insert silly smiley face here) 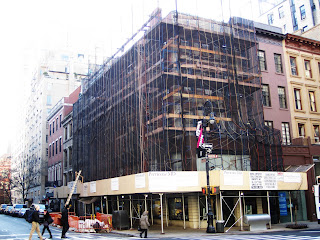 Here's the house from the front. Photoshop or no, it's almost impossible to see what's going on. 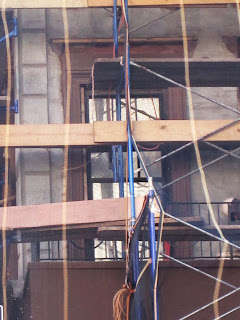 What's going on is the reconstruction of the original window surrounds. These would have been made of brownstone when the house was new. Now they're made of molded stucco painted brown, which will be virtually indistinguishable from the original. Edith Wharton once remarked, on the subject of intricate papier-mache interior cornice moldings, that as long as they looked like plaster, they were fine. 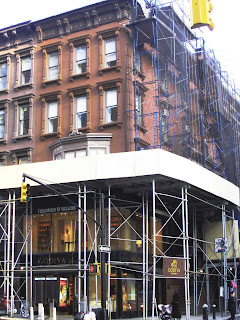 This house is across the street, on the northeast corner of the intersection of 67th and Madison. I don't quite understand what's going on, since this exterior was recently restored, the scaffolding removed, and now it's back up again. What they did here is precisely what's going on beneath the netting on the other side of the street - which I hope will include re-installation of a roof line cornice. 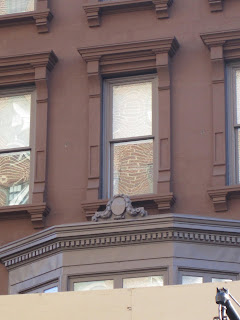 Here's a closeup of the image above. Isn't that little draped shield atop the oriel window a charming detail. 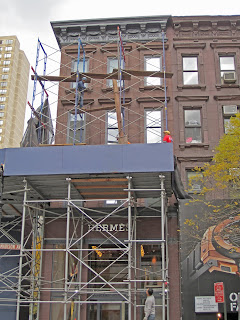 Replacing missing architectural window surrounds - shaved off either as part of ignorant alterations or in lieu of expensive maintenance - makes a huge difference in the appearance of a vintage building. Here's another corner house, this time at Madison and 62nd, purchased and renovated a few years ago as an annex to the Hermes store across the street. When first completed, Hermes elected not to replace window surrounds that had been removed many years earlier. Despite the considerable sum spent on the alteration, the house looked bad. To their credit, Hermes immediately put the scaffold back up and finished the job correctly. 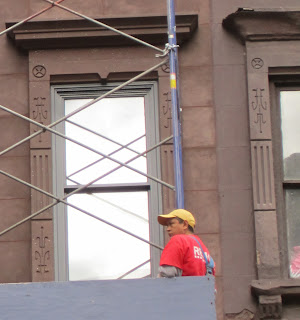 The Hermes house was also part of a spec row, built in the 1870s judging from the fashionable Eastlake motifs incised into the stone. Hermes replicated the surrounds and their decoration using surviving details on the adjoining houses as a template. 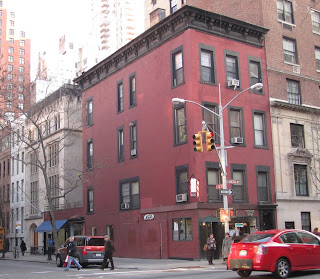 Speaking of window surrounds, here we are back on Lex and 70th, looking at a house without any. The commercial street level alteration is typically uninspired; the back yard extension rises only one floor; and someone along the way has shaved off the window surrounds. I'll bet somebody else then decided to paint "decorative" (yeah, right) black borders around the naked windows. Years ago, I bought a house on West 81st St. from a nice old lady who'd run it for years as a rooming house. When I asked what had become of all the Victorian mantlepieces - alas, not a one had survived - she told me she'd pulled them all out and thrown them away because people only wanted "modern." 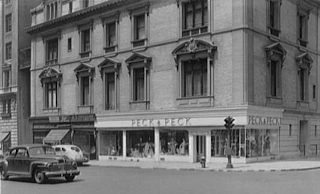 OK, this is a bit of a non sequitur, but while concentrating on Madison and 67th St., I came across this vintage image - taken in the late 1940s, if that is indeed a '45 Chrysler in the foreground - of Peck and Peck, the chic women's store that went bust in the 1970s. What a grand old mansion it's in, located on the southwest corner of the intersection. I've always wondered what used to be there, because what's there now is.... 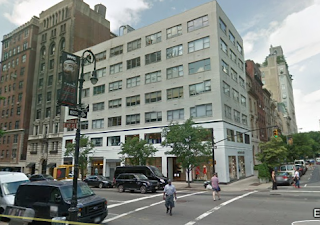 ...this horrible building, truly a seven-story basement above ground. There's another of these on the next block up, just as intrusive, just as destructive to the texture of the neighborhood. These buildings predate the establishment of the Upper East Side Historic District and this one, anyway, constitutes eloquent justification for landmark law.
Posted by John Foreman at 3:18 PM