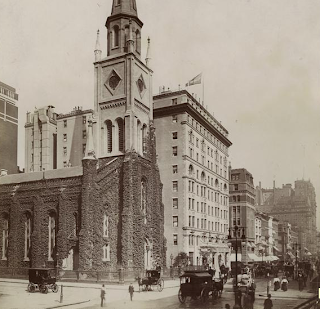 This is Marble Collegiate Church, located on the northwest corner of Fifth Avenue and 29th St. Marble Collegiate was built on this corner in 1851, when this was Manhattan's newest chic neighborhood and New York society was busy colonizing it. I'd say this photo was taken around 1900, my main clue being the horseless carriage sitting on the left side of the image on 29th Street. This stretch of Fifth Avenue, together with the Madison Square district immediately to the south, had by this time been transformed from a quiet neighborhood of elite private houses, to a fashionable district of swank hotels and expensive shops. There's a big difference between the two. Plenty of nice houses remained, but they were now interspersed with office buildings and hotels, and in some cases owned by rooming house operators and high class madams. P.S. Don't you love the ivy on the church walls? People don't let it grow all over buildings any more, which I think is a mistake - aesthetically anyway. 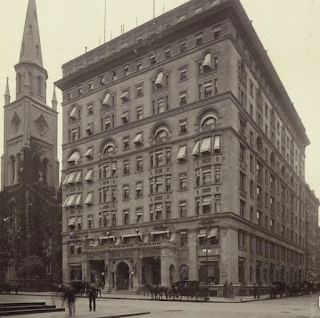 One of those afore-mentioned swank hotels was the Holland House, located next door to Marble Collegiate on 30th Street and Fifth Avenue. My own New York City apartment is located in a modern day neighborhood that's very much like this one used to be. On my block, East 63rd between Madison and Park, are ritzy private houses, a handful of brutally chopped up brownstones, my own modest 6-story self-service elevator apartment building, a drop dead chic restaurant called Bilboquet and a hotel called the Lowell which literally oozes low profile chic. The difference between East 63rd St and East 29th St. is the Upper East Side Historic District which, we assume, will preserve it from the tasteless demolitions and alterations that have afflicted so much of Manhattan to the south. 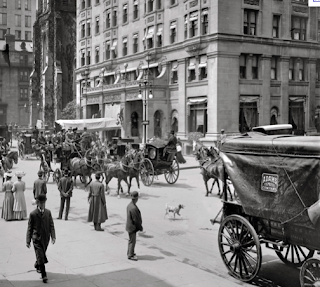 Here's another view of the Holland House, taken on what I'm betting was a busy Saturday morning. That white awning extending from the lobby entrance indicates some sort of fancy function going on, probably a wedding reception. This building had beautiful lobbies and function rooms. Sometimes when I look at old photos of busy streets, I imagine the people who will one day see photos of New York streets taken in my time, very possibly with yours truly unconsciously in the center foreground. See that guy in the hat, standing on the corner with his hands behind his back? That could be me. I even have a hat like that. Like the others on the sidewalk he's looking at the elegant four-in-hand coach that's clattering up the avenue. It's being driven by some socialite athlete in a dove gray top hat and leather apron. Its top is practically spilling over with fashionable folk. Public coaching was a favorite millionaire's sport back then. Col. DeLancey Kane ran a regular service - albeit one restricted to an exclusive group of society types - between the Brunswick Hotel on Fifth and 26th Street and the then semi-rural suburb of Pelham. It was one of fashion's arcane dicta that swell passengers on a four-in-hand should ride on the roof. Only servants (if any) rode inside the coach. The New York Coaching Club was an elite group, if for no other reason than the astronomical cost of keeping a coach, horses, grooms, stabling and postilions. The Coaching Club still exists today, although its members no longer tool up Fifth Avenue or around the Central Park.

In July of 1876, Harper's New Monthly Magazine published the following amusing description of a coaching excursion. 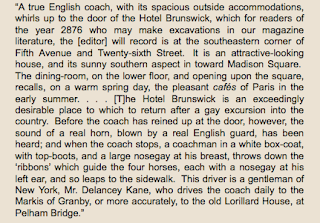 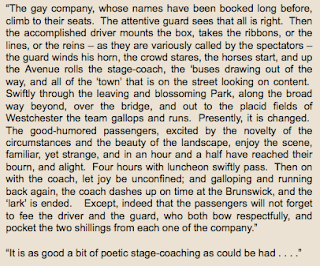 Here's Marble Collegiate today, still standing but without the ivy. The building is faced with Tuckahoe marble, hence the name. It was originally a colloquial nickname but became institutionalized over time. Interesting tidbit: Marble Collegiate's senior minister between 1932 and 1984 was the famous Dr. Norman Vincent Peale. And in case you forgot precisely why he was famous, it's because he was the man who, among other things, wrote "The Power of Positive Thinking." 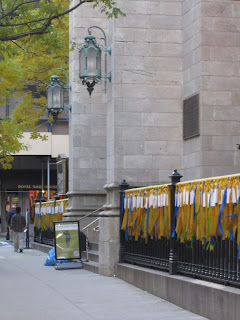 The yellow ribbons that hang on the church's fence commemorate thousands of American military who have died in Iraq and Afghanistan. 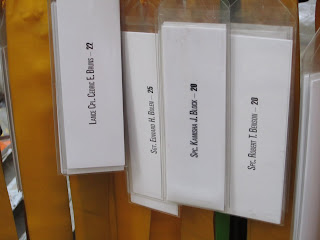 These are people's children, children just like yours and mine. To walk along the avenue in front of the church, and continue around the corner onto 29th Street, looking at the thousands of cards and ribbons provokes considerable emotion - from grief at the loss, to frustration over one's individual helplessness in the face of war and politics, to anger over neo-conservatism and its unrepentent proponents. 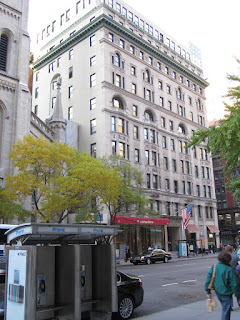 The Holland House today is an office building, deprived of its original porch, and topped with a new tier of offices on the roof. A few years back the owners replaced a ghastly 1960s front door alteration - you know the look, slabs of awful polished granite, aluminum doors, utter architectural disconnection from the rest of the place - with a new front door. Far simpler than the original, perhaps, but a quantum leap in the right direction. On the far right of this frame, almost obscured by the tree, you can just make out an old brick building. 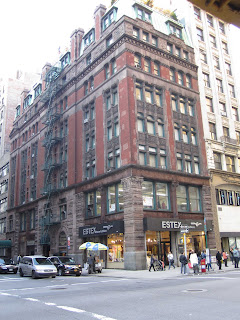 Here it is, the Wilbraham, built between 1888 and 1890 as a high class bachelors' residence. Back in the 1890s, this was the sort of building and neighborhood that attracted fashionable single men with disposable income, good jobs, but neither wife nor family. One of Mamie Fish's "finds," an "extra man" who had the good fortune to inherit sixty million dollars, lived at the Wilbraham. His name was James Henry Smith, known to friends and readers of the society columns alike as "Silent Smith." For a while in the early twentieth century, he cut quite a swath in New York society. 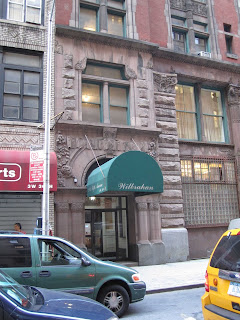 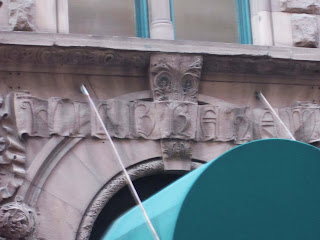 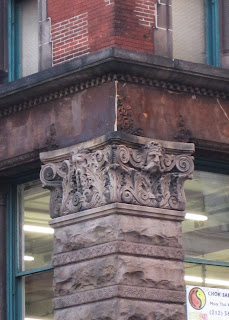 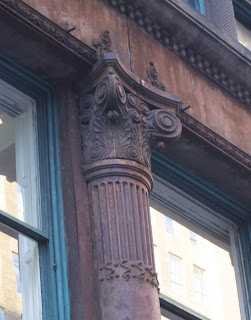 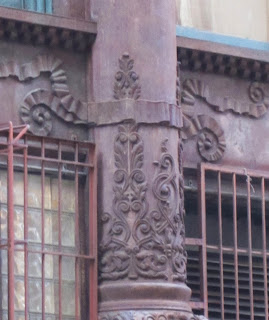 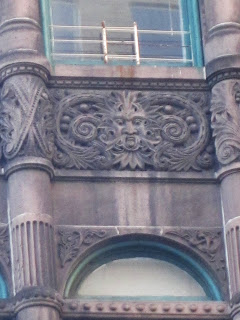 The Wilbraham installed private kitchens in 1934, which sounds like more of an upgrade than it was. Originally, the place had the air of a private club; by the time of the Depression it had become a unfashionable rental in a blowsy neighborhood. It's a coop today. Whether or not it's chic is beside the point. Architecturally, it's divine. 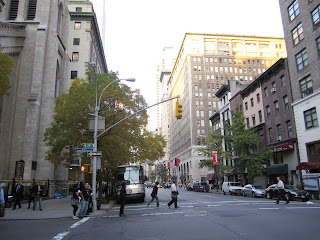 This is the view today up Fifth Avenue between 29th and 30th Streets, with Marble Collegiate on the left and the carcasses of a few old mansions across the street. Every once in a while, I find myself in a room on an upper floor of one of these houses, and lo and behold, the ceiling is still ornamented with grand moldings, an ornate marble fireplace still stands against the wall, and old mahogany shutters, although nailed into side boxes, are still in there too.