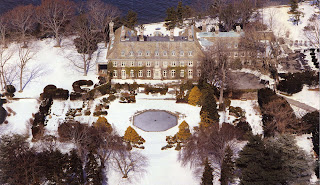 I have a friend who, a few years back, was sufficiently exercised at the world to start a website he called rant.com. He then proceeded to get everything that bugged him out of his system online, after which a period of intellectual languishing ensued. Now rant is again going strong. Recently I have discovered myself ranting a bit on Big Old Houses. I guess in the context of the Universe, it doesn't matter that much if people muck up the top floors of old houses, or paint the stonework, or make any of the myriad architectural blunders on which I've fixated of late. I keep a file on the third floor of Daheim that's packed with miscellaneous print material picked up over the years, that pertains to big old houses that have caught my imagination. I dredged through it between Xmas doings this weekend - P.S. Xmas day was my 66th birthday - and came upon some old friends.

The very grand house in the aerial photo above is called Salutations, located on its own 60-or-so acre island, connected by causeway to woodsy suburbs north of the small Long Island city of Glen Cove, NY. 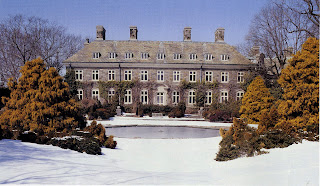 I wouldn't call this my absolute favorite style of house, but it's certainly grand. And we like grand. The architect was Roger H. Bullard, about whom I know very little. The client was Junius Spencer Morgan III, son of J.P.Morgan Jr, who in turn was the son of the great financier J.P.Morgan. In 1928, Morgan III built the house on an island adjacent to his father's sort-of island. The latter was a picturesque bulge of land that is almost, but not quite, surrounded by water. The paternal island is now coated with suburban houses which, however nice, will never be nice enough to excuse the destruction of the magnificent Georgian mansion and grounds they replace. But...I'm ranting. 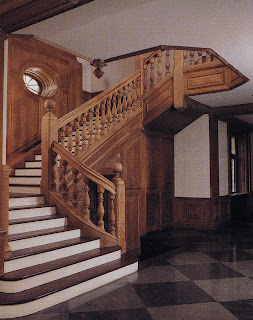 Morgan III, who was, among other things, a director of Morgan Guaranty Trust Co., died in 1960. His widow survived him by many years, although seemingly not all of them were spent in this house. In the late 1970s, a glamorous Texan named John S. Samuels burst onto the New York social scene with pockets full of cash and an elevated sense of cultural mission. Within a very few years, by dint of strategic donations, he had become chairman of the City Center, the City Opera, the City Ballet and the Vivien Beaumont Theatre. Samuels was the eminence grise behind something called the "Artistic Directorate" that aspired to multiple productions in the performing arts. It included luminaries like Woody Allen an Edward Albee. Unfortunately, by the early 1980s Samuels' businesses had crashed and he was ducking the law. For a short while, he occupied Salutations, but it's not clear that he ever owned it. When Mrs. Morgan died in 1993, it was her estate that sold the property to the present owner. It's private and intact today. 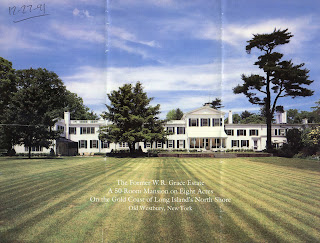 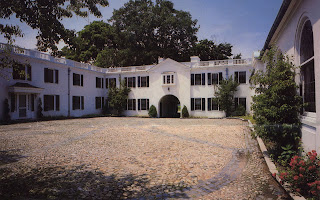 The house was designed by James O'Connor and built in 1919 in the midst of what was then Long Island fox hunting country. It is a perfectly enormous place, notable for its immense indoor tennis court and a similarly gigantic ballroom which, aesthetically anyway, owes more to an English pub than a czarist palace. 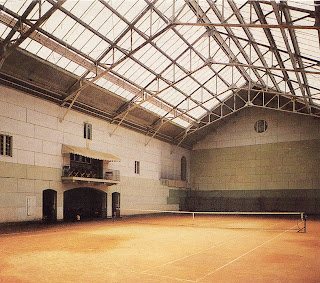 Here's the tennis court, which I believe is still intact. Whether it's used or not, I cannot say. 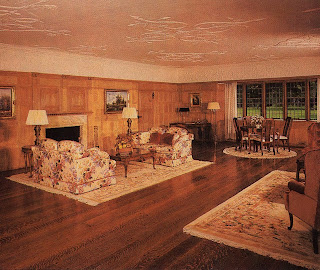 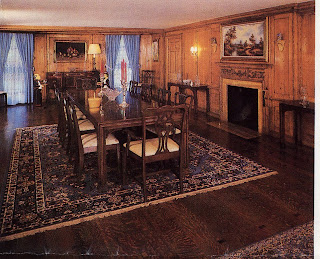 When I went through this house, now many years ago, it had been unoccupied for years and didn't look at all as appealing as these photos. In the 1930s and '40s the Long Island squireocracy managed to thwart William Moses' plan to run the Northern State Parkway through the middle of their estates. However, they were either less focused, less powerful, or their number had simply diminished by the time Moses planned the Long Island Expressway. Today all eight lanes of it run along the southern border of the former Grace estate. When you're on the property, you can't see the highway, but you sure can hear it. The last time I drove by the gate, the shrubs and lawn around it were looking a little shaggy. The property was intact as recently as the late 1960s - complete with quarter mile race track. The house today stands on 8 acres. 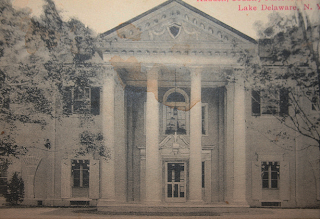 Years ago I had a real estate client who worked for an outfit whose business was, among other things, auctioning houses. In the depths of today's foreclosure crisis, we hear about house auctions all the time. Twenty years ago, I'd never heard of such a thing. There was to be a final auction of an apparently unsaleable estate - at least, all other efforts had failed - located in the hinterlands of upstate Delaware County, NY, near the town of Delhi, and my client invited me. I'd never been to Delaware County, which turned out to be a world of big open spaces, muscular rolling hills, and no zoning.

The estate was called Aknusti which, according to one amusing although probably unreliable account, means "expensive proposition" in some Indian language. It was designed in 1912 (a vintage year for big old houses) by Walker & Gillette (a top drawer firm) for Robert Livingston Gerry, son of Elbridge T. Gerry. That name, incidentally, is pronounced with a hard "G" and sounds like "GARY." I recognized the name immediately since Gerry "pere" was not only a Gilded Age commodore of the New York Yacht Club but also owner of a famous Manhattan mansion that stood on the site of today's Pierre Hotel. A distinguished ancestor, also named Elbridge T. Gerry, was a signer of the Declaration of Independence and fifth Vice President of the United States. Commodore Gerry's son Robert's Aknusti stable sent thoroughbreds to Saratoga, Belmont and even the Kentucky Derby. Robert's brother-in-law was New York Governor Averell Harriman. 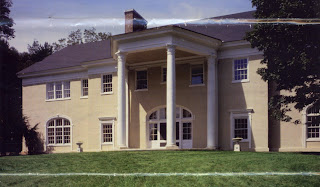 In 1953, Aknusti was gutted by fire. The exterior reconstruction was disappointing to say the least. Yes, the columned porch in the image above occupies the same position as the porch in the vintage image above it. Aknusti's reconstructed interior was equally disappointing, as well as being just plain weird. The house I saw on the day of the auction contained a collection of banal rooms with not much more style than a suburban subdivision house. Those interiors, however, occupied only half of the original main block. The other half was a yawning shell, still scorched, completely demolished but totally unfinished, rising to a height of two and a half floors and lit by staring windows. 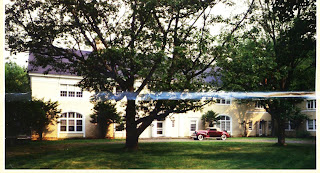 There was a tent on the lawn on auction day, trays of champagne, and an atmosphere of anticipation, However, no bidder topped the reserve and Aknusti didn't sell. Eventually an investor group bought it and announced plans to transform it into an elite resort called Broadlands. As far as I know that never happened. I'm not sure what's going on there now.
Posted by John Foreman at 6:59 AM