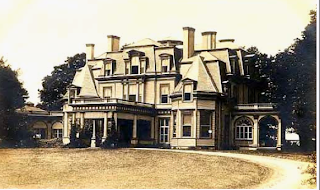 This is Thorncrest, the house that really started the stylish village of Millbrook, my hometown located midway up the Hudson between New York and Albany. When built in 1867, Thorncrest was called Millbrook Farms. The house was demolished in 1940 at a time when big old houses - especially Victorian specimens like this - were held in exceedingly low repute. Although it's gone today, you can just make out the footprint of it beneath a wild and tangled woodland that's overtaken the site. 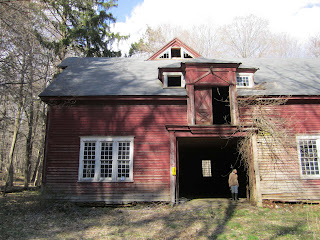 Here's the carriage house, still standing...just barely. Thorncrest was quite an estate in its day, covering 400-or-so acres and famous for beautiful gardens and vast views. According to the New York Times in 1895, Thorncrest was "in view from a long distance," a veritable apotheosis of the local "hilltopper" estate. Samuel Thorne, the man who owned it the longest, was a businessman who took religion very seriously. Thorne sponsored his son-in-law, a semi-shady character named Richard Tjader, in a series of evangelical projects, few of which amounted to much. During the Depression, Tjader's widow operated Thorncrest as the International Mission Union Bible Center. At her behest the flamboyant Billy Sunday preached in Millbrook twice before his death in 1935. When the mission petered out on the eve of WW II, the house was closed. Attempts to sell it failed and the family had it demolished. 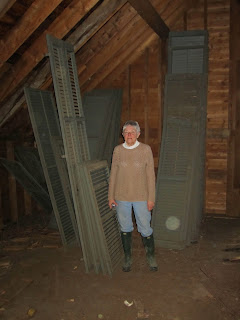 This snapshot shows my friend, Nan, on the second floor of the carriage house beside a stack of surviving shutters. These were mounted over the windows during those times of the year when the family was away. They're the only things left from this huge old mansion, and give a vivid sense of its scale. Before demolition the contents of the house were sold at auction. Prices were low and some things received no bids at all. According to local legend, Samuel Thorne's vast leather-bound library could not get even a $100 bid. Rather than spend money to truck the books away, they were left in the shelves and bulldozed into the foundation when the house came down. Old newspapers supposedly last indefinitely in landfills. If so, Thorne's library may still be under the rubble. 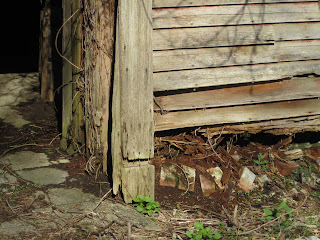 The carriage house is a wonderful structure but sadly in need of repair. It was an acrobatic stunt for Nan and I just to get to the second floor. There is no excavated cellar; the structure sits on a slab. Romantic in its way, buried as it is in a forest below the ruins of a great house, one wonders if anyone will save it in time.
Posted by John Foreman at 9:45 AM