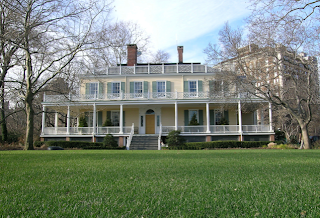 If I were to become rich and famous (an unlikely event at this stage of life) and build myself a country place, would I call it "Foreman Mansion?" I don't think so. Yet how easily "Gracie Mansion" rolls off the modern tongue. Archibald Gracie (1755-1829), the rich Manhattan merchant who built it, may perhaps have called the place Belleview, the name of a house built about 1760 on the same site. In 1776, Bellevue's Tory owners fled to Flatbush and George Washington commandeered their strategically located country place. He then mounted a gun emplacement commanding the turbulent waters of Hell Gate at the end of their lawn. Disinclined to tolerate that for long, British warships sailed to the site and blew the rebel guns to pieces - and the house along with them.

In 1798 the heirs of Jacob Walton, owner of the demolished Bellevue, sold the 11-acre site to Gracie, who proceeded to built on it a rural retreat to complement his city residence downtown. Stylistically, the new house has a lot in common with Alexander Hamilton's "Grange" (see below). Although the architect isn't known for sure, the design is usually ascribed to either Ezra Weeks or John McComb Jr. Personally, I'd vote for Grange architect McComb. The details on the Gracie house - the balustrades above the porch and above the second floor, the roof line, the porch rails, the window proportions - are all very similar to those on the Grange; the construction dates of both houses were separated by less than three years; and perhaps most important, Gracie and Hamilton were close personal friends whom we could logically expect to hire the same architect. Did you know these two men founded the New York Post together? I didn't. Years after Hamilton's death, Gracie bought the Grange in order to sell it back to Hamilton's widow for half what he paid for it, enabling her to stay in her family home with money to boot. Archibald Gracie was a prince among men - generous, loyal, good-natured and hospitable to a fault. Louis Philippe, the future King of France,was a guest in Gracie's garden, as were James Fennimore Cooper, Washington Irving, and John Quincy Adams.

When Gracie's country house was first built, the front door was located not in the center of the image above, but on the facade that faces left. The building was enlarged in 1811, at which time the front door was relocated to the river facade where it is today. Two additional bays of windows were added to the right. That front door still gazes down a long lawn to the confluence of the East and Harlem Rivers called Hell Gate. 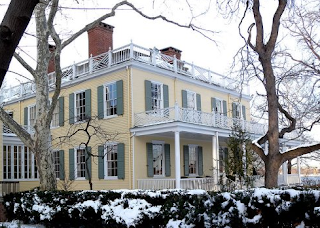 Here's the side view of Gracie Mansion today showing the original entry facade behind the porch. The similarity to Hamilton Grange, both in scale and detailing, is very evident. Gracie's shipping business went bust in 1819 and despite the generous efforts of friends, neighbors and his rich son-in-law James King (son of Declaration of Independence signer, Rufus King), Gracie was forced to sell in 1823 to insurance man Joseph Foulke.

In those days, Hell Gate was an unspoilt rural area, ornamented with fine houses and gardens, some of which had been lovingly tended for almost a century. The neighbors were mostly old Knickerbocker families - Rhinelanders, Joneses, even old John Jacob Astor whose grounds bordered the Gracie estate on the south. All this was to change rapidly. By the time Joseph Foulke sold the property in 1857, industry had befouled a great deal of the waterfront. The typical upscale country house buyer no longer looked to buy in Hell Gate. 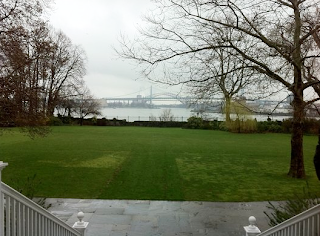 Here's the view today from the front door of Gracie Mansion. Notwithstanding the arch of the New York Connecting Railway Bridge and the distant spires of the Triboro, this view preserves an evocative sense of Manhattan's vanished riverfront estates. As the 19th Century progressed, there were some who continued to cherish the East River views, despite the decline of the neighborhood. One such was a man named Noah Wheaton, a manufacturer of window sashes and blinds who bought the property in 1857 and lived there for the next 39 years. 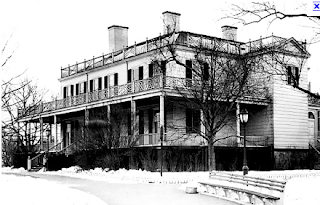 In 1891 New York City began land condemnation for the new East End Park, renamed in 1910 for Secretary of the Interior, Carl Schurz. In 1896 the Wheaton house was condemned and, typical of public stewardship of former private property, allowed to go to hell. The City used it for miscellaneous park purposes, allowing the paint to peel and the balustrades to fall off. Horrified citizens organized a restoration in 1923, after which it became home for the Museum of the City of New York. In 1936 the museum decamped to Fifth Avenue and the mansion became a house museum until 1942. The image above was probably taken during this period. In 1942 Robert Moses, the man who disfigured the East River shoreline for all time with his East River Drive, proposed the brilliant idea of saving Gracie Mansion by making it the official residence of New York City's mayors. The mansion's first tenant was Fiorello LaGuardia. 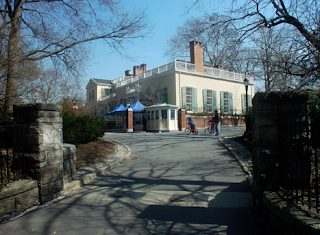 In 1966, society architect Mott B. Schmidt put a big addition onto the inland side of the Mansion, making it more practical for large meetings and social functions. Visible beyond the East End Avenue entrance in the image above, it is called the Susan B. Wagner Wing in honor of then Mayor Robert Wagner's wife. Aside from the new wing and the invisible but oddly present East River Drive which transits the property via a tunnel under the lawn, Gracie Mansion is incredibly well preserved. To stand on the porch and gaze down the lawn at the broad waters of Hell Gate is to experience vanished New York in a way impossible elsewhere.

Two random facts about Gracie Mansion:
1) Remember the "Yule Log," that peculiar Christmastime feature on Channel 11 back in the 1960s? For those of you who don't, it was simply a holiday-time telecast of a log burning in a fireplace. The fireplace was in Gracie Mansion.
2) The mansion is a residence for employees of the City of New York and their immediate families ONLY. Which is why Mayor Giuliani and his girlfriend couldn't live there together, and why Mayor Bloomberg and his girlfriend don't even try.
Posted by John Foreman at 7:58 PM