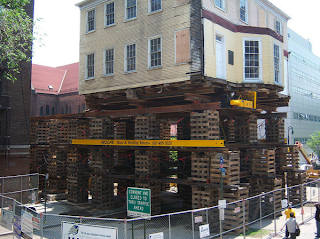 This post really belongs after the one below. (I know, I know...I got confused). Mind reading that first then coming back here? Thanks.

OK, We're back. The Grange might have been a cherished survivor, but everybody knew its location was lousy. Problem was when the subject of moving it came up, people in the neighborhood got nervous it would be taken away from them. In 2008, an ideal solution was found, right around the corner in the precincts of St. Nicholas Park. One wonders why it took them so long. Here's the old Grange jacked way up in the air on the first leg of its trip to the park. Presumably the reason it's up that high is in order to clear the curving porch of St. Luke's Episcopal. A portion of the church's roof is visible in the left background. The modern building in the distance on the right (no ornament to the neighborhood, I might add) stands on the southeast corner of Convent Avenue and 141st St. and is a part of City College. The long side of the Grange in this view was originally the back wall when the house was built. It became a side wall after the house was relocated to Convent Avenue. The brown strip along its right corner shows where it abutted the neighboring apartment house. 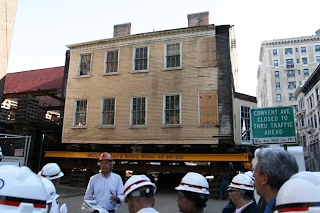 Now they've got the house into the middle of Convent Avenue, lowered it down, and it's ready to travel. Here it comes onto the new foundation. The house will be pivoted counter-clockwise so that the to-be-restored front door in the middle of the facade on the right will face 141st Street. The bay window on the left facade, which faced Convent Avenue for over a century, will be in the center of one of the matching side porches. 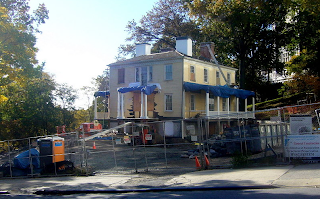 The house is now in position and reconstruction of the entry porch is under way. 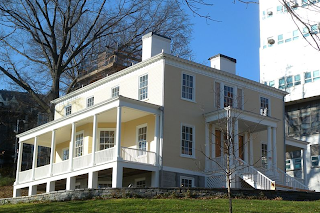 It's not done yet, but it sure is looking good. I can't wait to visit.
Posted by John Foreman at 4:35 PM