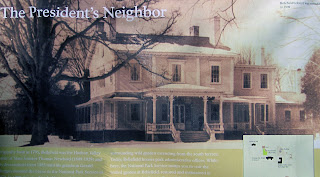 I visited the FDR National Historic Site yesterday, located in Hyde Park, NY, quite near to us in Millbrook. I knew from past visits that the Roosevelt house, called Springwood, was originally a fairly modest place that had been dressed up, ca. 1915, in an architectural ball gown, courtesy of the New York firm of Hoppin & Koen. I was also aware, in a general way, of a large house immediately next door called Bellefield, used for Park Service offices. I hadn't realized, however, how architecturally interesting Bellefield really was, or that its owners had transformed it in a manner quite similar to the Roosevelts'. Bellefield isn't open to the public, but you can walk around outside and explore its splendid Beatrix Farrand-designed garden. The image above, mounted on a plaque in front, informs us the house was built in 1795 and renovated by the distinguished firm of McKim Mead and White in 1909. Clearly, there was some Victorian era tinkering in between those dates, notably that front porch. 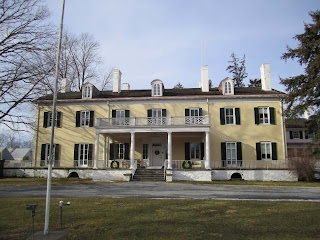 I'm not quite sure how my digital camera has managed to distort this view of the present day facade. Bellefield is much more comely and better proportioned than the image above suggests. The original Federal house still survives behind the middle three bays of the facade, its four chimneys still in situ. Two new wings, each about the size of the original house, have been attached to either side of it. The new porch is larger, the new terrace broader, the windows now casements (visible behind the second floor storms), delicate dormers pierce the roof, and the walls have been stuccoed. 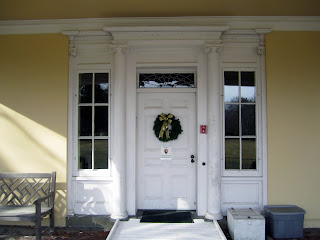 What hasn't changed from 1795 is the elegant front door with it's lovely leaded transom and dignified sidelights. I have been amazed to discover how many fine houses in Dutchess County are actually sophisticated early 20th century renovations of existing 18th and early 19th century buildings. I wonder who was in charge of the Bellefield job - White was murdered in 1906 and McKim died in September of 1909. Mead lived until 1928, but he's not generally remembered for design work. 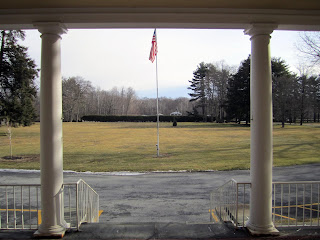 Here's the view of the lawn from the front door. Route 9, beyond that line of evergreens, is a busy two-lane highway lined with a mishmash of commercial buildings, diners, and mini-malls interspersed with scraggly woods. However, from Bellefield's front door the road is less of an intrusion than you'd expect. 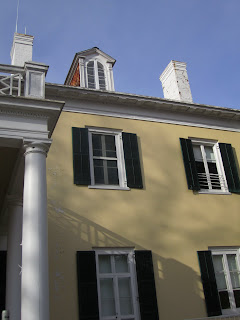 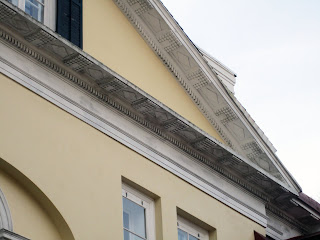 Details of the 1909 MM & W addition, with eaves as scholarly as they are fitting. 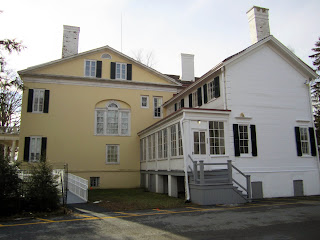 It looks to me as though the bottom floor of the northern service wing is also visible on the image at the top of this post. Many local 18th century houses started life as modest farm dwellings to which sophisticated two-story additions were affixed. Without being able to go inside, it's hard for me to tell if this northern wing is a remnant of an older house or not. 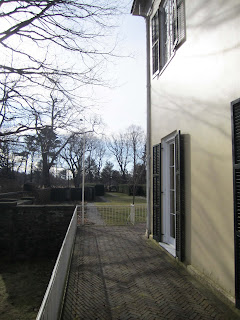 This view looks south along the terrace that stretches across the front of the house. The walled garden lies beyond. 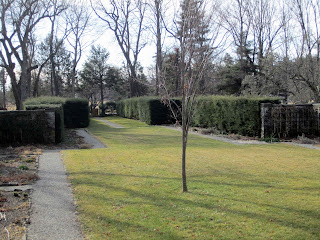 Even in winter, with hedges unkempt and flower beds barren, this lovely south garden is eloquent of sophisticated living. Beatrix Farrand, incidentally, was one of the ten founding members of the American Society of Landscape Architects, as well as being Edith Wharton's niece. 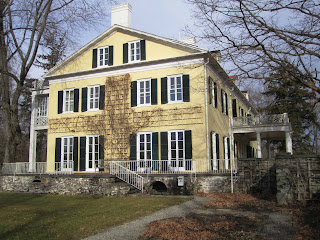 This view of the south facade gives a much better sense of what the house really looks like. The MM & W renovation was commissioned by a New York State senator and Hudson Valley social type named Thomas Newbold (1849-1929). A descendant named Gerald Morgan donated it to the government in 1974. 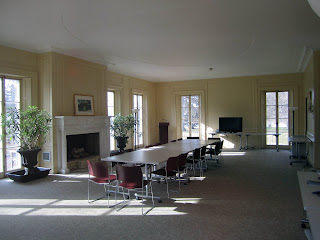 I pressed my camera against a french door to get this shot of the drawing room overlooking the garden. Easy to imagine the industrial carpeting, plastic molded chairs and yellow paint magically removed and the room restored to its original sunny elegance. 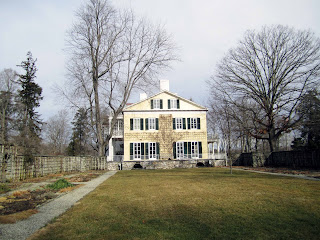 The south facade, a little further out. 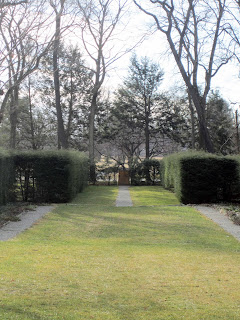 The garden, a little further in. 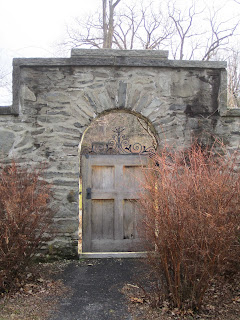 The garden gate, from the outside. 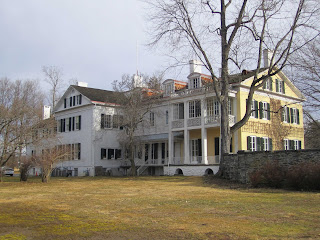 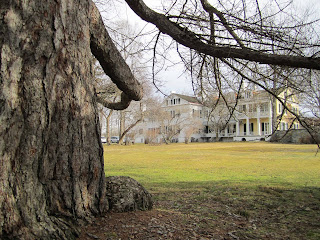 The rear elevation is less collected, but still appealing in a big old house kind of a way. I did a quick archival newspaper search on Thomas Newbold and came up with an accident report, dated January 12, 1911. The former state senator was sailing his ice yacht, the Nansen, in a race sponsored by the Hudson River Ice Yacht Club. A huge and sudden gust of wind picked the boat completely off the ice, turned it upside down and pinned Newbold under the bowsprit. A crowd raced across the frozen river from the Hyde Park shore, righted the yacht, Newbold climbed back behind the tiller and finished the race.
Posted by John Foreman at 3:09 PM