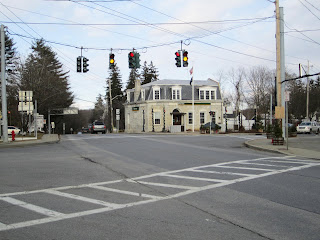 This is the Amenia light looking north on US Route 22, which from this point runs together with US Route 44 as far as the village of Millerton. Amenia, wedged between Millbrook's horse-ocracy on the one side and Connecticut's WASP-ocracy on the other, is a kind of shy stepsister to both. Traffic typically sails through this light without giving Amenia a second look. Before the automobile age, the intersection had narrower roadways, more trees and a landscaped island located more or less in its center. That's all gone now, the victim of highway widening. 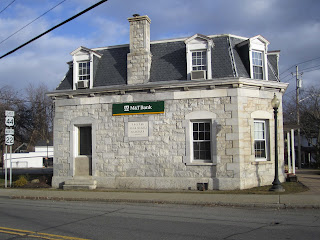 If most passersby look at anything in Amenia, it's the marble bank building on the corner, dating from 1865. The village itself is much older, founded in 1788 and formerly the center of a prosperous farming district. Amenia, according to Wickipedia (which must be correct), is a corruption of the latin word Amoena, meaning "pleasant to the eye." In October of 2005, "The New York Times" published an article titled, "A 'Laid Back' Place Becomes a Hot Property." In your dreams, New York Times writer. A lot of that supposed "hotness" emanated from a couple of big city developers who were trying to convince the locals that 600 new townhouses would actually make life better. Thirteen percent of Amenia's population over 65 - an age category in which (gulp) yours truly belongs - currently lives below the poverty level, so spurious "development" arguments often gain traction. On an unrelated subject - which I feel mysteriously impelled to note - Amenia's chances of being hit by a tornado are, statistically anyway, 15% greater than the national average. 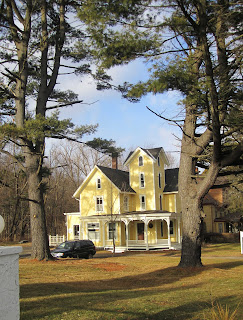 Hardly anyone seems to notice - at least hardly anyone I know - but Amenia is full of nifty old houses. It's a very compact place, its residential district extending the equivalent of a block or two north and south of the light, and an architecturally inventive business row stretching about the same distance east on Route 343, which is a part of the confusingly signed intersection of 22 and 44. The house in this image, plus those in the next two, stand along Route 22 heading north. 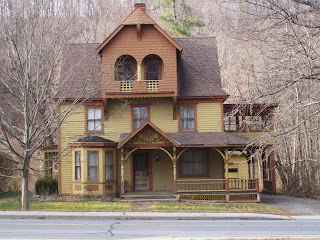 How about this place? I'll bet barely a handful of the hundreds of motorists who pass it every day even see it. Unfettered by notions of proportion, symmetry or balance, those Victorians would try just about anything, and oftentimes it worked. 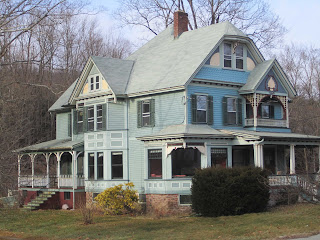 Not as inventive as the example above, perhaps, but this is a really nice house - and a very high class paint job. 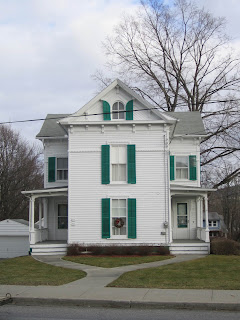 South of the light, the lineup is equally interesting. This may not be the grandest house - it may not even be a single-family - but it radiates the sort of spacious settled comfort typical of 19th century American houses. I love the big tall windows, the flared and bracketed eaves and the rounded window in the gable end. All the windows have real shutters too, not those hideous plastic screw-ons. 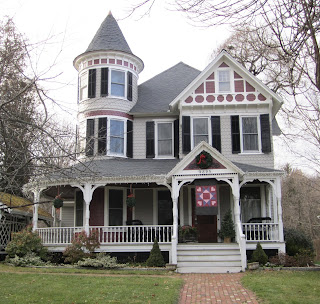 I'll bet if you asked anyone in Millbrook where this charming old house was located, not one would guess Route 22 in Amenia. Which, I guess, says more about Millbrook than Amenia. 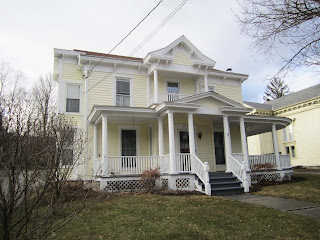 Not a grand place, perhaps, but the paint on Daheim should look this good. 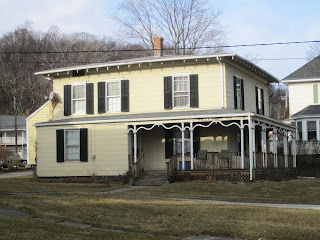 I don't love fill-ins or asbestos shingles, but this remains a very interesting early Italianate house. I'd date it somewhere in the 1850s. 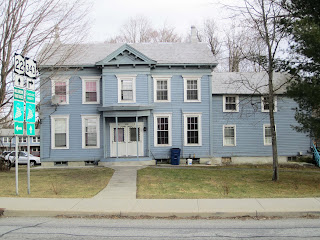 The wing to the right is probably the oldest part. My guess is a modest early 19th century farmhouse was mansionized at some subsequent date in the 19th century with a magnificent 2-story, 5-bay colonial addition with pedimented center bay. The present aluminum doors and poorly scaled porch - not to mention the blue color - detract from the aristocratic architecture, but it's there for anyone who looks. 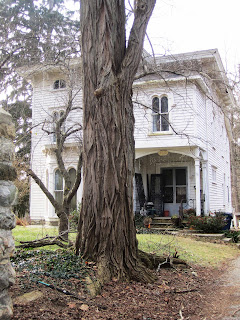 Once past this textbook Italianate villa, Amenia peters out into fields and woods. 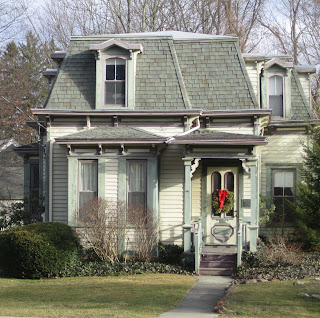 There are delicious small houses on Route 22 as well, or at least there's this one. 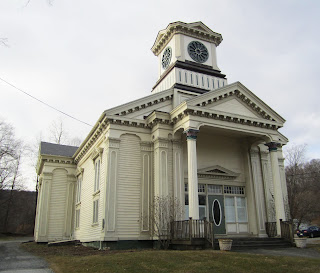 There are also two noble churches in the village, this one having been converted into a house. 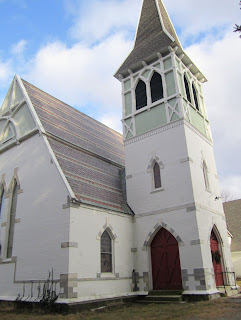 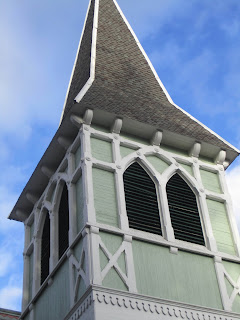 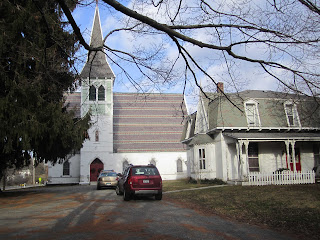 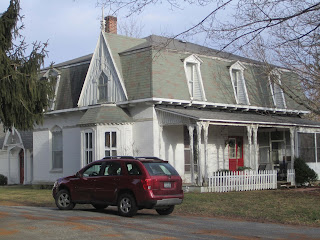 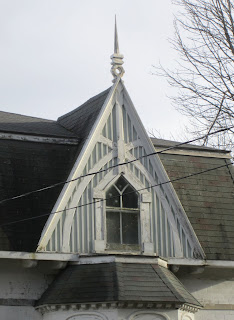 After living up here for 30 years, it wasn't until I got out of my car yesterday and actually walked up and down Route 22 that I saw this remarkable Victorian Gothic church and rectory complex. 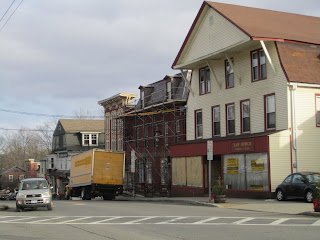 Here's the commercial strip, extending east along Route 343. Not very big, but lots of visual interest. 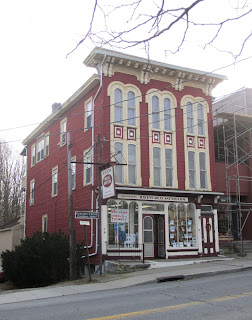 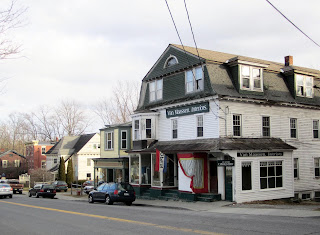 A little after these buildings, you'll come to a grave yard, and then it's open countryside all the way to Sharon, CT.
Posted by John Foreman at 7:45 AM