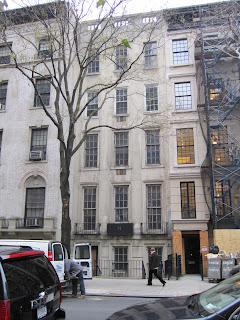 For the purposes of this post "My World" extends only one single block from my New York apartment on East 63rd off Madison. It is an artificial world, I'll admit, heavily colonized by the so-called 1%. When I was born at the end of 1945, great private fortunes in America were on the wane. The city palaces and country estates of the robber barons were falling one by one, and they continued to fall for another forty years. I loved those houses and grieved over their destruction. Now the tide has turned the other way and the world around me is re-gilding itself, house-wise anyway. But I'm a grownup and I can see how ordinary people are struggling harder and harder to survive, while the 1% get richer and richer. How tedious it is to hear Republican candidates repeatedly proclaim, with straight faces, that the only way to fix things is to keep lowering taxes on rich people. Of course, if the country changed from the direction it's traveling in now, people would stop fixing up old houses. So... a moral dilemma, for me anyway. The house above is across the street from my apartment. It's been an empty wreck for years, but an attractive young fellow has just bought it and plans to renovate and live in the whole thing himself. OK, I admit that I'd like to do that myself. (I probably wouldn't mind living there with him). This is what's happening on my block, while a very great number of my countrymen couldn't sleep last night for fear of becoming homeless altogether. 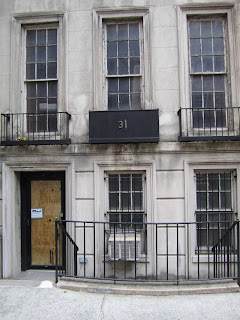 Clearly this front door needs work. Given the elevated level of taste in today's city renovations, I'm sure next year it will look quite elegant. 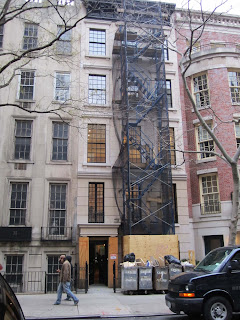 The house next door, as you can see, is in the midst of a gut renovation. If you can believe it, this place was ALREADY gut renovated only two years ago. As soon as it was finished, the owner put it on the market, which was when I saw it on a brokers' tour. It was a beautiful place - a bit contemporary for my taste, but certainly luxurious and finished in a first class manner. Whoever bought it tore everything out, right down to exposed floor joists, and is essentially rebuilding from scratch. I guess I rejoice for him, since I've already admitted that I'd love to renovate a brownstone myself. But buy one that's done, rip it all out, and start all over again? I read in the papers today that Tiger Wood's divorced wife demolished a $12 million house she only just bought too. 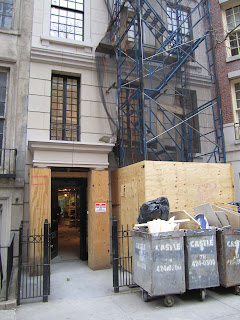 This front door, under the protective plywood, was made quite elegant in the last renovation so I don't envision many changes there. Interestingly, during that recent renovation the brownstone facade on this house was stripped off and replaced with a replica of itself in marble. 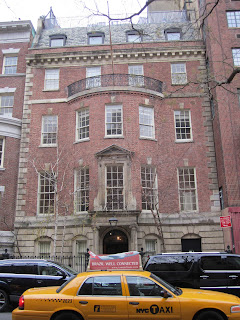 This building originally housed the Hangar Club, designed in 1929 by Cross and Cross for a private organization of early aviation aficionados. It's now the elegant private residence of our block's billionaire. 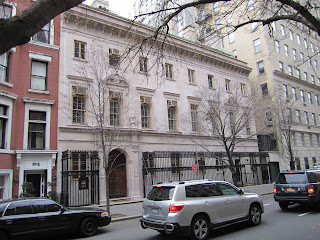 I forgot whose house this used to be, but New York University owned it for years before selling it to a Russian oligarch. Not much has been happening since the sale, save for a slightly slap dash coat of paint on the iron fence and removal of the institutional sign over the front door. 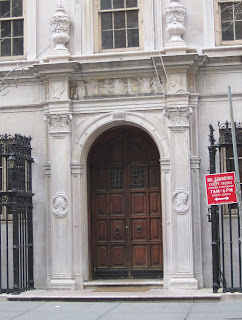 I'm hoping the damaged frieze over the door will be repaired. We brokers have the impression that Russian oligarchs can afford to fix anything. 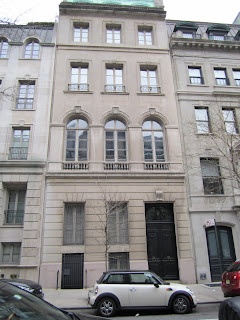 I have no idea who owns this magnificent townhouse and have never even seen a light on inside. I envision its owners gliding around the world from one splendid house to another, unconcerned about having money to pay the bills. 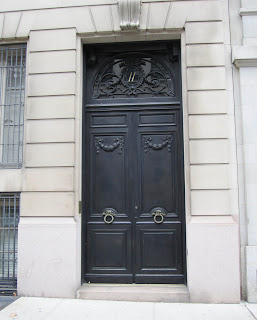 Quite aside from the issue of economic injustice in the world, this front door is a thing of beauty. 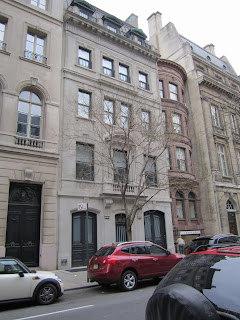 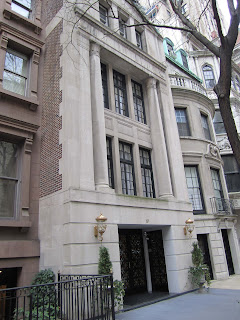 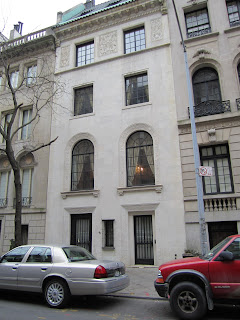 I'm not zeroing in on exceptions here. The houses above are all private, all magnificent, and chosen at random from a dozen candidates - OK, more than a dozen, and all within a block of my apartment. 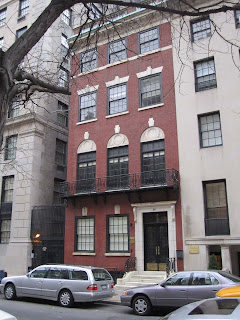 This facade is not perhaps as successful as some of those above, but the interior is gorgeous. I remember it from when the house used to be the office of The New York Observer. It's again a private residence. 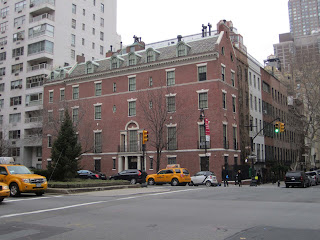 This one was just renovated too, after many years of absentee ownership. Conventional wisdom has it that modern zillionaires find avenue corners too exposed, although someone evidently disagrees. 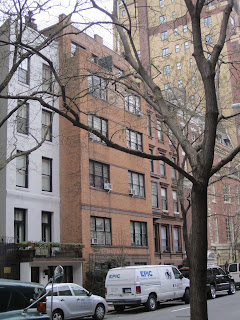 Returning now to earth, here's my apartment house on East 63rd, and that's my terrace on top at left. You probably wouldn't recognize it immediately, but my building was once two skinny brownstones wedged between the white house on the left (another private single family, natch) and the two stoop-less brownstones on the right. A developer after the Second World War bought my site, demolished the brownstone facades, and replaced them with this vaguely Art Moderne design. From the back yard, my building still looks like two old houses. 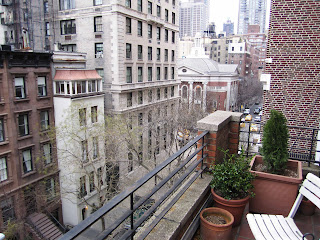 Here I am, home again on my terrace. See that brownstone with the high stoop across the street? My building used to look like two of those.
Posted by John Foreman at 12:11 PM