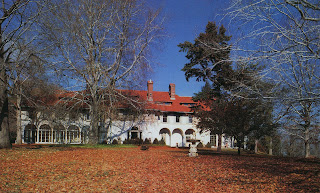 I'm done writing "Old House" articles for the Millbrook Independent, and what a shame something that used to be so much fun has come to an end. However, that is not the total of my life. My daughter is having a baby girl, which is sufficiently joyful to offset most everything else. Also pleasurable is a new assignment - for pay, no less - to write a monograph on a neighbor's house. This has turned out to be as much fun as my old Independent articles, but it's taking a huge amount of time. My blog is suffering from inattention, and I love my blog.

For this week's post I revisited the same file I raided last week in order to extract another trio of old friends. The house above was occupied by a fancy customer I had many years ago, who wanted to rent a Manhattan pied a terre. He wasted no time in telling me about the swell house he was selling near Bernardsville, NJ. The broker representing him wasted no time sending me a courtly letter and photos. That broker also offered to give me a tour, but as I had no customer I didn't feel it was right to inconvenience a colleague, or to get his hopes up for nothing. 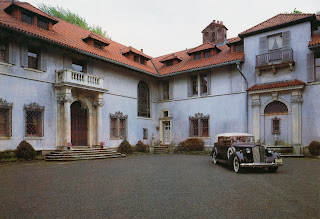 Here's the other side of the house, with the obligatory vintage Packard or Stutz (or whatever it is) parked out front to conjure images of Gatsby in the buyer's mind. I wish I knew where this house was located, aside from being "somewhere near Bernardsville." I wish I knew who designed too, as it is such a knockout. The broker was calling it Villa d'Andre, but I can't vouch for the historical accuracy of that name. 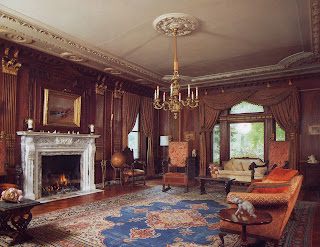 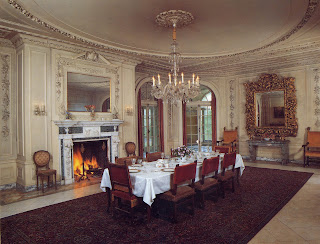 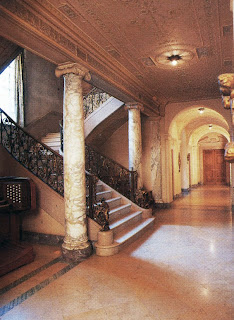 How about these interiors? I love Daheim, but this is really my kind of house. 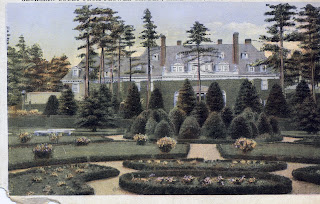 This is George Gould's Lakewood, NJ estate, Georgian Court. It's a college now, and the house has survived in good condition. Gould was the son of railroad manipulator, Jay Gould, and the husband of actress Helen Kingdon. He was an elegant chap with a huge amount of money, both of which factors managed to counter-balance the effects of national hatred directed at his father and snooty attitude directed at actresses by society people of the time. Socially, the Goulds were, as the saying goes, "on the green but not dead to the hole." Georgian Court was designed by Bruce Price, famous for among other things, the original club, gate complex, village and cottages in Tuxedo Park. Most of Georgian Court is comprised of elaborate gardens and a sporting complex that still contains one of the handful of Court Tennis courts in the United States. The estate grounds are so elaborate that the house seems almost an afterthought. I like its heft and especially its ornate double height main hall. I also like the look of it covered with ivy, no longer there these days. Georgian Court was by far the grandest estate in Lakewood, whose fashion as a resort was as fleeting as it was unexpected. The area today is mostly characterized by undistinguished suburban development. 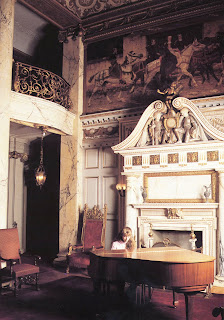 Here's the interior of the double height hall. It's a wonderful house, both grander and heavier than Bernardsville above. 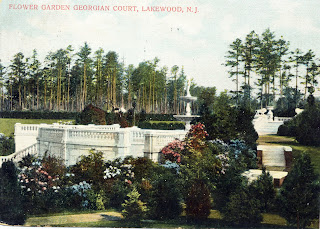 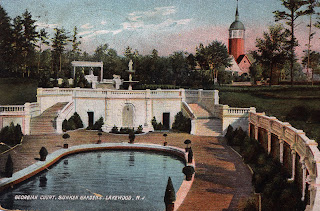 Although no longer very well maintained, these sorts of gardens are all over the place at Georgian Court. 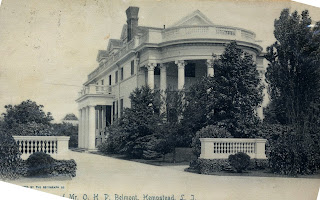 Here's a house that really came and went in a flash. It was called Brookholt, built by the famous society figure and female suffragist Alva Belmont (the former Mrs. William Kissam Vanderbilt), and located just southwest of today's intersection of Merrick Avenue and Front Street in Uniondale (or West Hempstead), Long Island. This was once an area of tender rural beauty, not one trace of which remains today. Alva had Hunt and Hunt, successor sons of Richard Morris Hunt, design the house just before the First World War. For a short period, she operated the estate as a training school for female farmers, but soon tired of the project. After the war she moved to France to be near her daughter, Consuelo Balsain (the former Duchess of Marlborough) and devote her architectural energies to renovating a chateau that had belonged, appropriately, to Joan of Arc's sponsor. 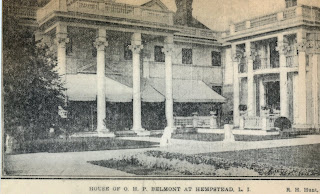 This is a blurry newspaper photo of the other side of Brookholt, taken from a 1934 article about the fire that destroyed it. Alva sold it in the 1920s to investors who planned to open a country club. The plan never came to pass and the house was rented to people who, as it turned out, converted it into a gigantic Prohibition-era still. The newspaper description of the federal raid is full of juicy details about Mrs. Belmont's satin bedroom full of barrels and her ballroom dominated by distillery tanks. Apparently the floors became so impregnated with alcohol that one day the old place - not so old, really - practically exploded in flames. It looks like it was a maintenance monster, what with all those columns and curly capitals, but quite beautiful still and all. 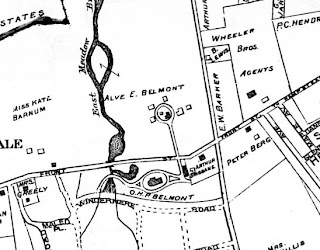 This 1914 map locates the sites of Brookholt's main house and stables on either side of Front Street - the house is to the south, the stables to the north. The distinguished neighbor immediately to the east was Arthur Brisbane, editor of William Randolph Hearst's "Evening Journal."