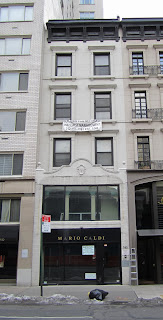 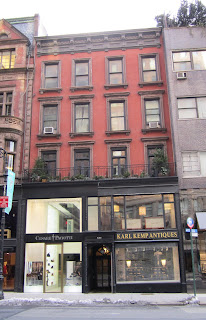 A deadly pursuit - a sort of figurative fox hunt - began on Manhattan in the 18th Century and didn't really stop until the 1920s. This was the juggernaut of commerce nipping at the heels of north-fleeing residential fashion. The process picked up serious speed in the 19th Century, when contemporary observers marveled how fine residences were being abandoned to trade - or, worse, to demolition - sometimes less than 20 years after construction. Luxury spec builders and individual owners alike were satirized for essentially outfitting the cheap rooming houses of the next generation. Most New Yorkers know that Fifth Avenue used to be lined with fine private houses. Not many realize that Second Avenue south of 14th St. was once equally grand. There was a time when New Yorkers conscious of social position worried at length whether to live on Fifth or Second. Blocks of much abused but still extant city mansions survive on Second Avenue today, their lower floors long ago given over to commercialism. The practice of converting two floors to commercial use and leaving the rest of the house intact became common along changing residential avenues and double wide cross streets. The fate that befell Second and Fifth Avenues also befell Madison, once an elite thoroughfare only a notch or two below Fifth Avenue itself. North of 60th Street, Madison retains a residential air today, even though it's hard to envision it as a street of private houses. That is, unless you look. A few days ago, I walked north up the avenue from my apartment on 63rd St., photographing the odd house that caught my eye. Many of the store conversions are pretty basic, others attempted an aesthetic of sorts, still others effected a change of use with barely any architectural change at all. Even in today's disguises, it's a comfort to me that the old houses are still here.
Posted by John Foreman at 3:48 PM