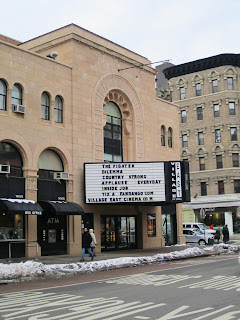 In the heydey of the Yiddish Rialto, there were theatres all up and down this stretch of Second Avenue. The National Theatre alone had 2000 seats. The only survivor from the era is the Yiddish Art Theatre, reincarnated today as the Village East Cinema. 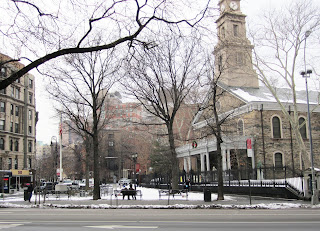 This is St. Mark's in the Bowery, once the aristocratic centerpiece of old Second Avenue. It sits at an angle to the Avenue because it was built on Stuyvesant Street, a roadway that predated the present street grid, and of which this one block survives. Peter Stuyvesant built a chapel here in 1660. The present church was erected in 1795, and the steeple added in 1828. For one block, between Second and Third Avenues, both Stuyvesant and East 10th Streets still preserve an air of Old New York. 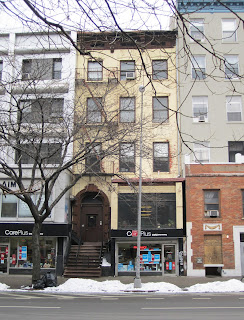 Here's another building that most people on a stroll up Second Avenue probably wouldn't even see. In its day, however, it was a very fine house. At some point in the Victorian period the original dormer windows were replaced with a full fifth floor. A heavy cornice (way too ponderous for the 1830s) was then tacked onto the top. The storefront, the yellow and brown paint, and the institutional front door do a lot to disguise the original effect. Once it looked very much like the image below. 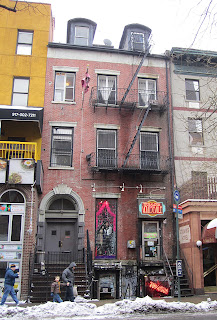 This house is right around the corner on St. Mark's Place which, but for the elegant sounding name, is the same as East 8th St. Note the similarity of the front door surround. Greek Revival houses from the 1830s usually have either engaged columns or free standing porches over the front doors. This particular treatment, evidently popular in and around Second Avenue, is very high styled for the period. The house may be beat up, but the full length parlor windows have survived, as have the dormers up top. The original cornice that ran below the dormers has been removed - assuming it didn't fall off. I'll confess I find this mixture of wistful bygone elegance and post-psychedelic crass commercialism oddly appealing. 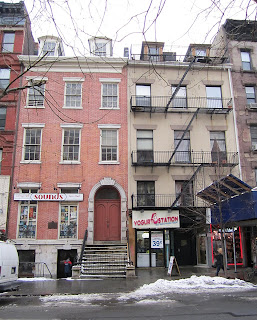 These two houses, also on St. Mark's Place, were part of the same speculatively built row as the house above. If you've ever been to Society Hill in Philadelphia - since it's been restored, that is - you have a good idea of the architectural delicacy that once characterized this neighborhood. The door of the house on the left is not original, but the rest of the facade looks remarkably preserved.
Posted by John Foreman at 1:57 PM