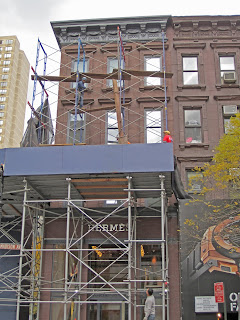 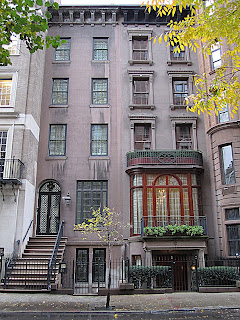 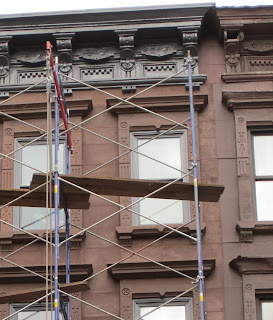 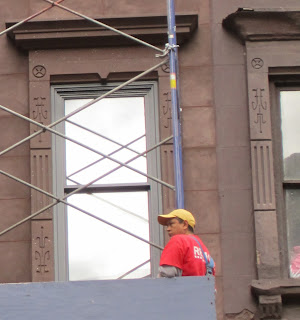 Much architectural damage in this world is done in the name of "nodernization." I still remember a moment many years ago, standing in the dining room of a ca. 1890 brownstone on West 81st St. The charming lady who owned it was explaining how she had "simplified" the mahogany paneling by cutting it down about 50%, because she thought it was "too much." The result was horribly under-scaled, but she liked it. The Hermes store around the corner from my apartment recently expanded into a brownstone row house on the northwest corner of Madison Ave. and 62nd St. Many years ago the facade of this house was also "simplified" by means of stripping away the original stone window surrounds. Hermes put a lot of money into renovating the building, but when the construction scaffolding came down, the upstairs windows looked terrible. Much to somebody's credit, another scaffold went up, and the original surrounds were exactly reproduced, using those on the adjacent house as a model. I love seeing things like this happen to old houses.

Image 1 - Here's the Hermes annex, with the scaffolding not quite all the way down.
Image 2 - These 2 houses, on the north side of East 65th St. between Park and Madison Aves, were identical when built. Both originally had high front stoops. The one on the left suffered the same strip job that disfigured the new Hermes' annex. Window details were frequently removed at the same time high stoops were torn off, often during the conversion from private house to apartment building. The stoop on this house was restored about ten years ago, but nothing was done about the windows. The house on the right also lost its stoop, but retained its original windows. Although the big bow window that's there today looks original, it's only a few years old.
Image 3 - A closeup of the new Hermes annex.
Image 4 - Looking even closer at an Hermes window. Deterioration and clumsy repairs are visible on the adjoining house, although not noticeable from the street.
Posted by John Foreman at 2:09 PM