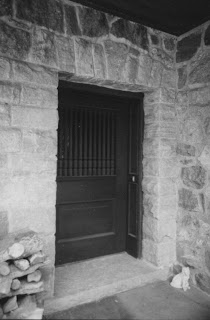 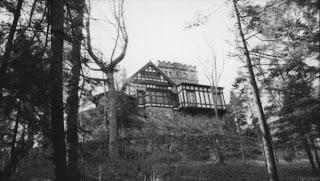 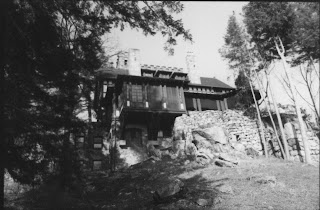 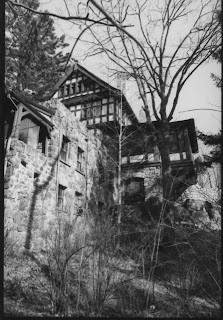 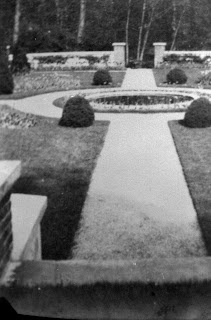 Image 1 - The front door opened into a small panelled foyer, and then into a grand stair hall. The newel posts were topped with fanciful creatures - a motif swiped from Knole in England.
Image 2 - The long retaining wall supports the drive coming up from the stable. Two very fine rooms faced east: the Gold Room, or ballroom on the right; and a small marble floored conservatory on the left.
Image 3 - The south facade had an open porch on the right. The cantilevered room on the left was a summer dining room with pale gray and white walls, floor to ceiling glass doors, a marble floor and an alabaster bowl chandelier hanging from the ceiling. Treillage laid on the walls in perspective patterns surrounded painted views of birds and flowers.
Image 4 - The summer dining room is visible on the right. On the left is the porch off the original kitchen, above which was a terracotta floored terrace with bad leaks. As a result of these, the original kitchen and pantries on the lower level were in ruins and we rarely went down there.
Image 5 - This is a vintage shot of the garden that unfortunately doesn't give much idea of the plantings.

It was the most beautiful house in which I ever lived. We sold it for twice what we bought it for, but that did little to soothe the sense of loss. After Paxhurst, we rented an even grander joint called Lindley Hall where, once again, our reach exceeded our grasp. At last report, both Paxhurst and Lindley Hall are in about the same condition they were when we left them.
Posted by John Foreman at 2:58 PM