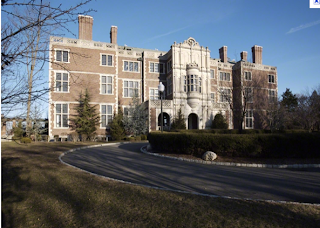 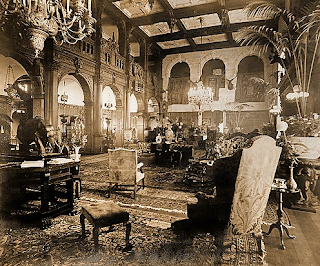 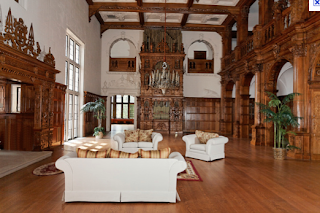 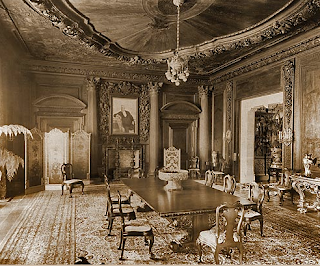 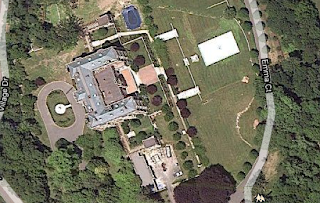 It is the honest truth that if I could contrive to live in a place like this, I would. It's called Darlington. The name commemorates a local squire named A.B. Darling, owner of the famous Fifth Avenue Hotel in New York. The house stands in renovated, single family condition in Mahwah, New Jersey on 12.5 of its original 1000 acres. Despite being surrounded by upscale split levels, the site preserves an unexpected degree of integrity. There's still a gatehouse, and a tree lined drive, albeit sandwiched between subdivision backyards. An imposing circle fronts the main entrance, and there's a fairly sweeping lawn out back. The architect was a man named James Brite, formerly employed by McKim Mead and White, and the client was George Crocker, son of railroad mogul Charles Crocker. Either Brite or Crocker must have had English Jacobean mansions on the brain. Completed in 1907, Darlington bears a very strong resemblance to Bramshill House in Hampshire. About fifteen years ago I visited Darlington with friends from Tuxedo. From the moment I set foot inside, I dreamed of living here. What is it about these kinds of houses that stirs my soul? I want to be in them; I want to touch them, and nurture them, and dream in them. Crocker lived here for only 2 years. In 1922 the next owner sold it to developers who planned to make it into a ritzy country club. The scheme ran off the track and the Catholic Church bought it in 1927. It was used as a seminary until 1986 when another developer bought it for around $9 million. Unlike many houses of this scale - in areas far more elite than Mahwah - Darlington has survived in amazingly intact condition. It is now being marketed to single family buyers for $25 million. And if I could, I most certainly would.
Posted by John Foreman at 6:38 PM