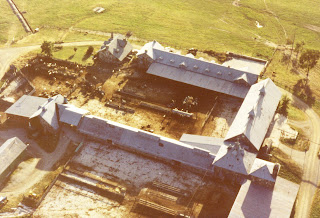 Here are the Daheim barns, seen from the air in 1982. Twenty-five years after I snapped this picture from a friend's plane, a catastrophic fire destroyed 60% of the complex. A remarkable reconstruction project has ensued. It was the subject of a luncheon lecture delivered today by yours truly to 300 guests at the 20th annual Dutchess Land Conservancy's Patrons' Lunch, held at the Barns. The centerpiece of the project is a facsimile of the ornate main barn, constructed within the compromised stone walls of the original. 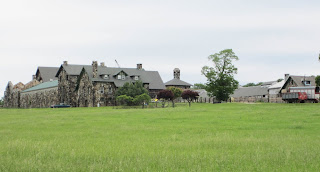 Here's a contemporary view of the barns from earth. Like the main house, Daheim's barns are so complicated you don't notice the new metal roofed equipment shed (light green roof on the left) that replaces the grand old hay barn. When built during the first decade of the twentieth century, this farm was a model dairy. For the last half century it's seen a lot of hard use as a beef cattle operation' 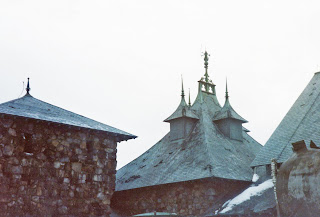 This is the roof of the molasses barn, taken before the fire. Admittedly kicked around for years, it was still essentially intact. 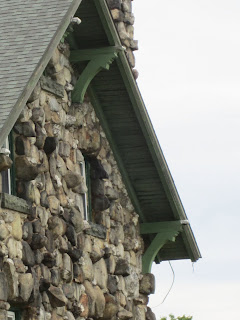 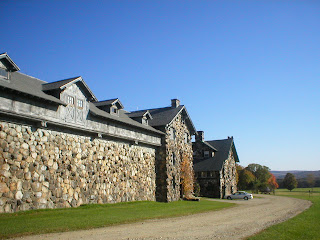 This is the old hay barn, the farm workers' dormitory and dairyman's cottage at the far right, seen before the fire. The hay barn was completely destroyed, the roof of the dormitory burned off, and the cottage was spared. 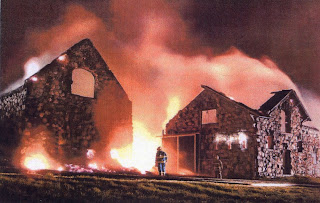 Here was the scene at Daheim on the night of November 15, 2007. It was the largest fire in the history of Dutchess County - 8 fire companies responded; 80 firemen struggled until dawn the next day to control it. They managed to save the cow barn, the dairy office, the dairyman's cottage and part of the dormitory. 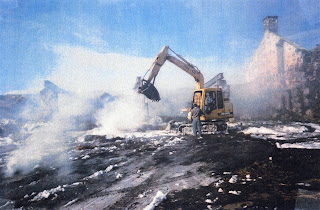 The next morning it looked like Warsaw or Berlin after the Second World War. Those white clumps on the ground are the remains of fire retarding foam. Still smoldering hay bales had to be hauled away and spread out on a nearby burn site. The heart of the fire was 350 tons of recently delivered corn that burned with a white hot intensity - and continued to burn for another ten days. 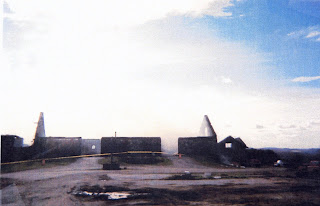 When this ghostly image was taken, the corn and hay were still smoldering. 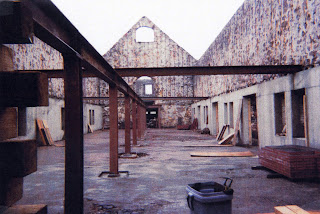 The barns on this estate have always been part of a working farm and there was no question that something would be reconstructed. The new equipment shed went up rapidly. There was talk of replacing the big barn with something similarly functional. Instead, my landlords have built an elaborate facsimile of the original. The image above shows a new poured concrete foundation and steel beams being constructed within the old walls. That's American-made steel, by the way, from Benson Steel in Saugerties, New York. 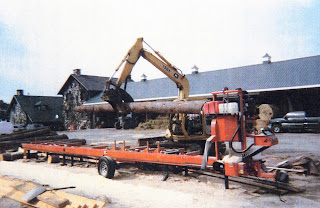 A local lumber firm, J & J Lumber, has to date cut 57,000 board feet of lumber for the project. J & J couldn't cut anything longer than 16 feet, which is why the portable sawmill in the image was purpose bought. A hundred a thirty spruce trees, planted a century ago on the property, have provided all needed lumber. 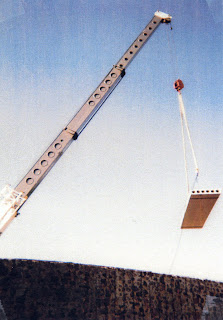 The big barn's original floor was made of wood. The new one is constructed of 68 "spancrete" slabs, each 4' x 18'. Spancrete is a sort of cinderblock on steroids, used frequently in parking garages. Here's one being hoisted into the sky. 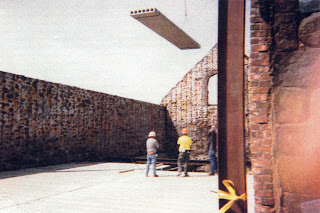 And here it is being fitted onto the new floor. 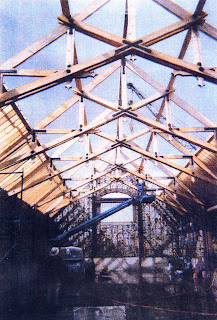 The roof trusses are tied to vertical steel beams anchored in poured concrete. There is no weight on the original stone walls. 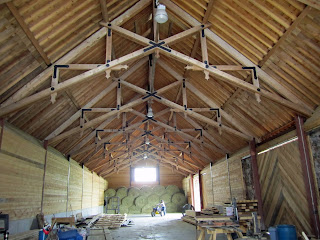 Here is the restored interior of the big barn, notable for its magnificent system of embellished trusses. This is surely one of the great interior spaces in Dutchess County. It might have been lost forever, but here it is, intact for generations to come. 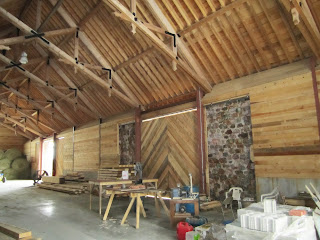 Here's detail of the new sliding barn doors. Steel verticals visible between wooden wall panels support the new roof. When the doors are closed, the unfinished interior of the original stone envelope is visible. 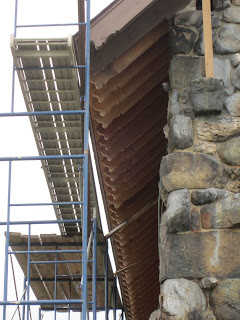 Even the scrolled rafter ends have been reproduced in this reconstruction. Although not yet mounted on the roof, replicas of two louvered lanterns complete with over-scaled copper finials, were on view at today's luncheon. 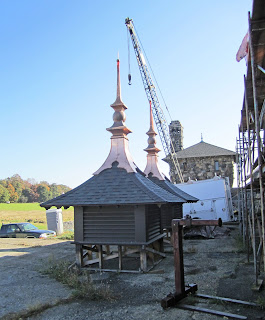 And here they are, poised for positioning on the new roof. The tops of the finials are removable for installation. Beneath each is an iron "eye" which the dangling "hook" on the crane in the background will link under, then haul the cupola to the ridgepole. Once the hook is disengaged, a worker will reattach the top of each finial. Although it's unlikely any of us on the estate today will be around to see it, in thirty years those copper finials will have turned a heavenly green.
Posted by John Foreman at 2:29 PM