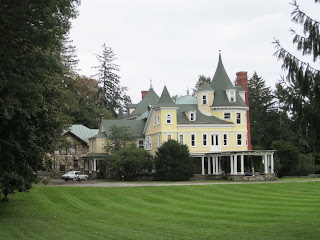 Here's Daheim, my home in Millbrook for thirty years, in a photo taken yesterday afternoon. It's a complicated looking house by any measure, and if it isn't huge, considering others I've blogged about, it ain't small either. Daheim was in ruins when I signed my first lease in December of 1981. It's taken a lot of work, time, sweat, love and money to get it looking like this. Remember Sisyphus? Well, probably you don't, but he was a mythological Greek king condemned by the gods to spend eternity repeatedly rolling a huge stone to the top of a hill, only to watch it roll back down again. 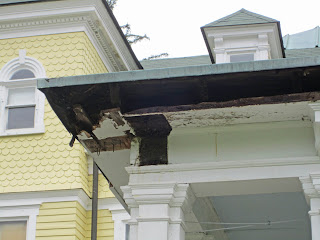 You probably didn't notice in the photo above that the eaves on my porte cochere are a mess. Actually, they look better since Eddie, my in-house construction man, pulled off the rotted wood in preparation for repairs. The explanation for the leaking eaves, while long and dull, can be summed up in two words that bring knowing nods from any old house lover, to wit: "flat roof." This one was resurfaced fifty years ago with tar and white pebbles. The desirability of this system completely eludes me, since it makes finding a leak virtually impossible. 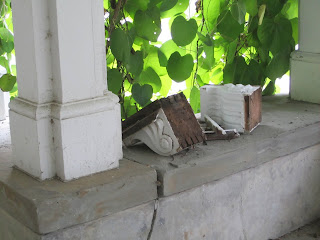 The porch - sorry, "piazza" - at Daheim has fifty-two columns and probably five times as many decorative brackets. This pair is resting on the parapet until Eddie gets the porte cochere back together. 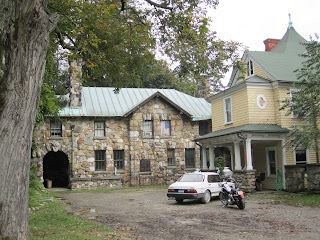 There are no longer so many houses like mine, in part because so many of them have burned down. The builder of Daheim had extensive interests in gas illumination companies, which must have made him more aware of fire danger. Shortly before World War I, he built this stone addition to house modern kitchen and servants' facilities, and to encapsulate a mammoth coal fired steam boiler in a steel and cement basement chamber. The exterior walls aren't veneered with stone, they're built with a two-foot thickness of it. The interior floors are supported with steel beams. My kitchen could probably survive direct mortar fire with only minor damage. The boiler room originally wasn't even accessible from inside the house. During the winter of 1982, my first caretaker, Noel, and I decided to open an access door from the basement corridor. Who would have thought the interior non-bearing wall would be a foot and a half thick and made of block and cement? 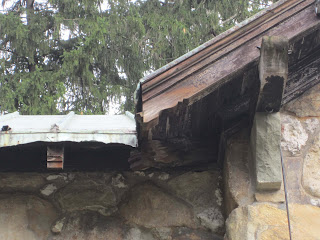 You probably didn't notice in the image above that some miscreant has made off with my copper gutters. When Daheim was new, and doubtless for many succeeding salad years of maintenance, those scrolled eaves and joist ends glowed under multiple coats of dark shiny varnish. But...not happening now. 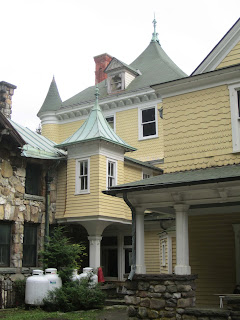 On the ground floor, the kitchen wing is connected to the wood frame section of the house with a flat-roofed serving pantry (don't even ask). On the second floor the connection is via this utterly charming "Bridge of Sighs." I can only paint Daheim in sections, but we got around to this side recently enough for it to still look pretty good. 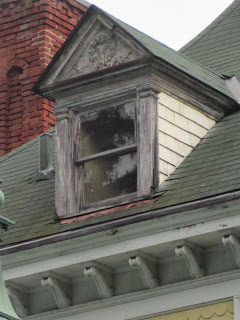 Well, "pretty good" unless you notice that dormer on the fourth floor. I'll get to it, after I re-point the chimney. Jeez, it doesn't look half that bad from the other side. 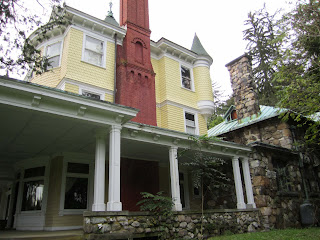 The chimney looks deceptively fine from this view of the east facade. Daheim's exterior envelope is so visually complicated you tend not to notice the warts. 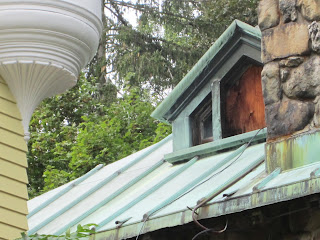 Speaking of warts, some benighted hippie from the Leary days - you do know Timothy Leary lived here, right? - managed to remove this attic window entirely. Noel and I temporarily boarded it up thirty years ago and it's still on my very (very) long "to do" list. 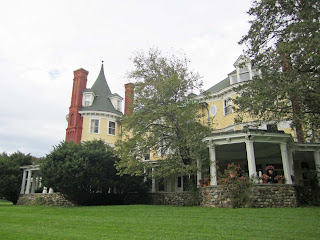 Here's the south elevation of the house. The mulberry tree and the gigantic yew bushes were deer-ravaged stumps in 1981. I have tended and protected them for thirty years and were they children, they would long ago have left home to make their own way in the world. Since they're plants, they're not going anywhere. I used to keep the yews trimmed as spheres, but that plan lost traction years ago. Now they're way too big for me to tackle. Last spring a landscape service gave me an estimate....$2400. Not going to happen. 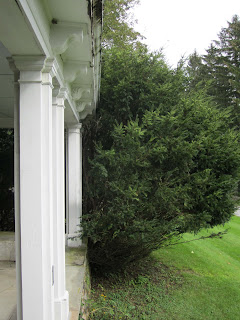 Nowadays I'm just trimming the yews to avoid actual contact with the house, but this is not the look I intended. 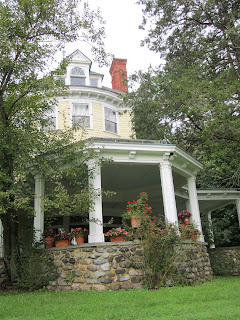 Daheim really is charming. I had the local historical society here for a tour and a tea last weekend, and everyone loved the place. 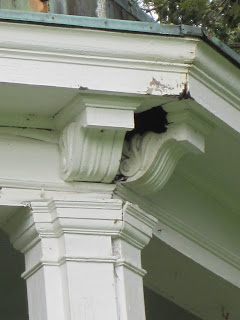 You probably didn't notice this hole in the image above. Alas, it's but one of a number made by aggressive squirrels whom I simply cannot keep out of the piazza ceiling. Were it not for my cat, they'd rampage inside the house as well. As soon as we plug one of these up another appears, although it can take a while to notice.
Posted by John Foreman at 6:24 AM