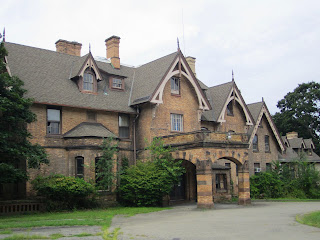 Jazzy and I just finished our 20th annual "father-daughter vacation" - sky diving, West Point, Millbrook cocktail parties, Albany. While driving north on Route 9D we spotted this enormous decaying mansion just south of the city of Beacon. I made a U-turn immediately, drove up to the front and pulled out my camera. 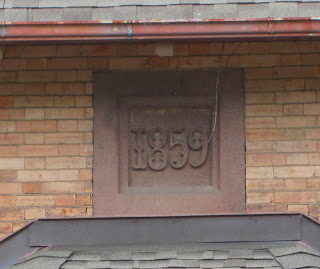 Besides being a major house, it was clearly a pre-Civil War design, confirmed by this plaque on the left side of the entrance facade. The house also had the air of recent - well, maybe not so recent - institutional use, although there were no identifying signs to say by whom or for what purpose. 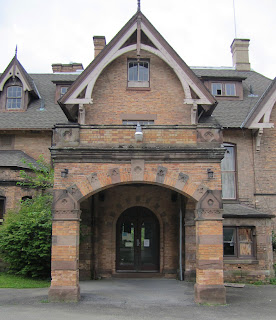 It took considerable cross researching on the internet before I discovered that this is Tioronda, the former showplace estate of General Joseph Howland (1834-1886), Civil War hero, Beacon philanthropist, and childless patron of the cause of mental health. Howland's sister married the famous American architect Richard Morris Hunt. His nephew was Hunt's famous architect son, Richard Howland Hunt. This, I thought, was pretty cool stuff. 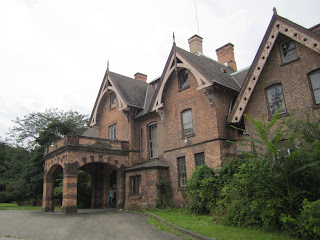 Of course I wondered whether Hunt Sr. had designed the house, but it turns out the architect was Frederick Clarke Withers, at one time partner of the much more famous Calvert Vaux (pronounced 'VOX'). Vaux's name is recognizable to many of us as half of Vaux and Olmstead, the architectural landscapers who designed many nineteenth century parks, prime among them Manhattan's Central Park. 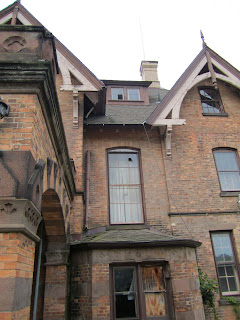 Tioronda today has that unfortunate "rocks through the windows" look, one that wounds the heart of every old house lover. Beyond those windows plenty of fallen plaster and water-damaged parquet is visible. Very sad. 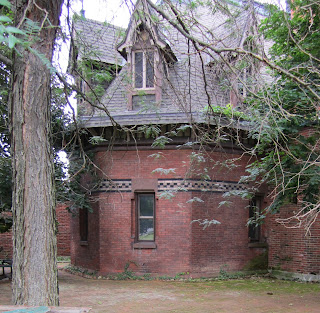 In 1873 General Howland added a music room designed by brother-in-law Richard Morris Hunt. I believe it's in this wing, located at the southeast end of the house. Howland's widow died at Newport, R.I. in 1917, by which time she had already donated her Beacon estate to her husband's favorite cause, mental health. In 1915, Tironda became the first licensed private psychiatric hospital in the United States. Renamed Craig House, for reasons I cannot discover, it functioned for 80 years as a high class sanitarium. Zelda Fitzgerald, the deeply troubled wife of F.Scott, was among the famous and the merely rich who were hospitalized here. 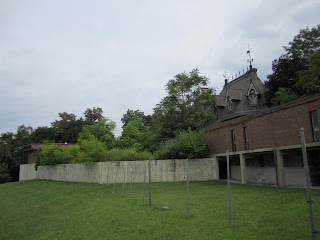 In 1995 the Craig House was purchased by something called Putnam Center Inc., which intended to continue psychiatric services under the name Craig House Center. That's the music room peeking over the top of this hideous new addition. That brutalist retaining wall supports a swimming pool. I don't know if responsibility for this lies with Putnam Center or the former owners. 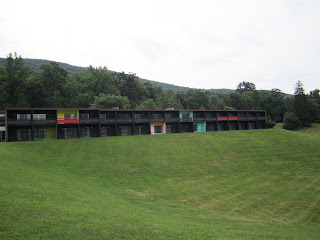 Someone will have to pay in the Court of Architectural Guilt for both the swimming pool addition and the motel wing connected to it. 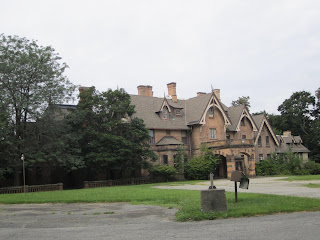 From the road, at least, you can't see the new design work, whose invisibility is about the best I can say for it. Tioronda is a house one could truly love and cherish, but its prospects don't look good. It's been vacant since 1999.