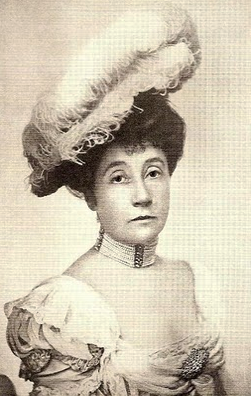 In this winter of our "global warming," yet another horrible storm managed to torpedo last Monday's field trip to Grey Towers, the Richard Morris Hunt designed home of America's uber-forester, Gifford Pinchot. I finally got there, but not in time to ponder, Photoshop and write it all up for this week. (Grey Towers, or 'Liberal Towers' as I think I'm going to call it, will be online next week). A fear of online silence drove me to rummage through old boxes of "high society" research, where I came upon one of my absolute favorites among the vanished swells of yesteryear, namely, the lady pictured above, Mrs. Stuyvesant Fish, nee Marion Anthon, a.k.a. Mamie.

Mamie's husband, Stuyvesant Fish, as elegant and pedigreed an Edwardian era American as ever strolled into the Newport Casino, is pictured below. Fish wasn't hugely rich - Mamie used to say they had "only a few" millions - but in combination with his family background, those millions were enough to put him and his wife into the top drawer of New York Society. Fish's father was at different times the governor of and senator from New York, and eventually became U.S. Secretary of State. In an age of rich parvenus, the Fishes were a better class of families than the norm. Stuyvesant Fish even had a job, as the extremely effective president of the Illinois Central, the so-called "Society Railroad." 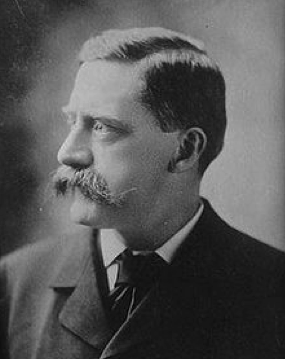 Mamie grew thicker and grimmer with age, but she maintained to the end a bracing sense of humor, one that terrorized those who knew her, and amused later researchers like myself. She had a wing man named Harry Lehr, the closeted gay man pictured below who is measuring us up from across the years. Harry and Mamie collaborated on outrageous stunts, creative parties, and rapid fire badinage of which, alas, little of record remains. When Harry cracked that Mamie's favorite flower was the climbing rose, she shot back that his was the marigold. Some of Mamie's cheeky talk appears in annals from the period. When a pompous visitor to Newport wondered where that great big new bridge had come from, Mamie growled, "I had it myself, and it was extremely painful." At huge parties in her Newport villa, she was wont to greet guests with lines like, "Oh it's you. I completely forgot I'd invited you." It takes a certain kind of mind to absorb a question like, "Has anyone seen cousin Alice?" consider the missing lady's good looking male assistant, and within a heartbeat chime in, "Have you looked under the secretary?" 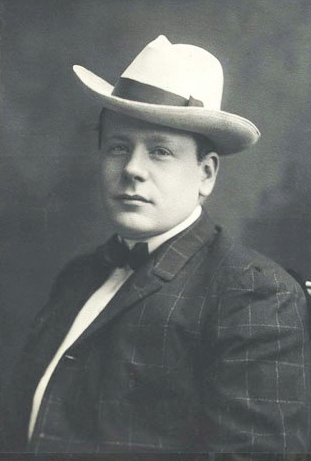 Here's Harry and pal Charlie Greenough in Newport in 1909, at the height of the former's career as a social lion. Harry married a rich widow, a woman innocent to the point of dumbness but sufficiently rich to support them both in the company of a social set known in the columns as the "Ultra-Exclusives." Harry played the devoted husband in public, which fooled no one, and when he wasn't cracking jokes or playing pranks with Mamie - like covering a dachshund with flour, giving it a smack on the rump, and sending it scampering into the tearoom at the Newport Casino - he chased boys. 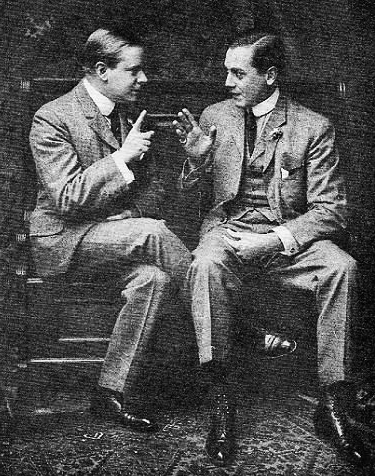 Mamie had a happy marriage to Stuyvie, as she called him, and raised well adjusted children who seemed unscathed by the limited access they had to their mother. The Fishes were Gramercy Park people initially but, like many of their friends, were inexorably dragged uptown by the tide of fashion. Stanford White, who had overseen alterations to the Fishes' Gramercy Park house, provided the design in 1898 for this new house at 25 East 78th St., notable for its elaborate ballroom. 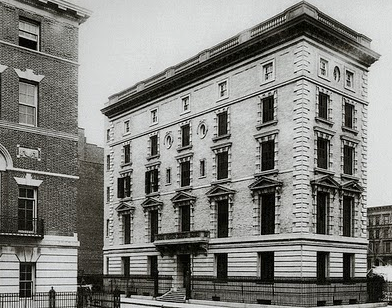 Here's the house today, still standing but now gutted for institutional use. Inside it's all stainless steel, metal cables and industrial lighting, although the exterior remains essentially unchanged and an ornament to the neighborhood. This block of 78th Street, known as the Cook Block after the rich man who subdivided it, was a particularly grand Upper East Side block. A number of its houses have over the years had clumsy extra floors tacked on top, and just as many have had sweeping marble staircases replaced by mean metal-railed straight runs. Notwithstanding which, it's still pretty grand. 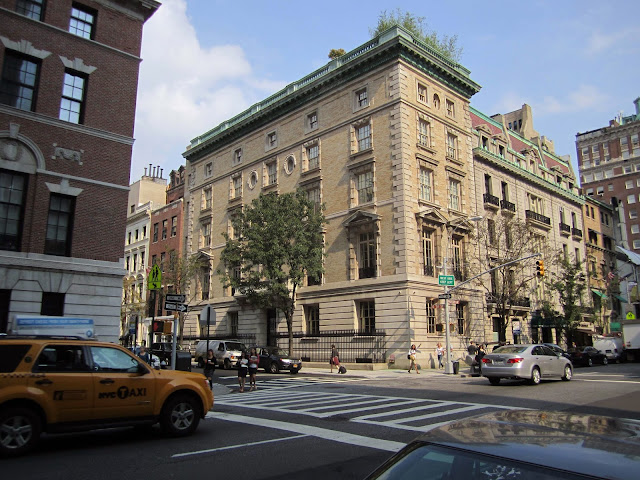 There was nothing I could do about that tacky truck parked out front. I had to get to work. 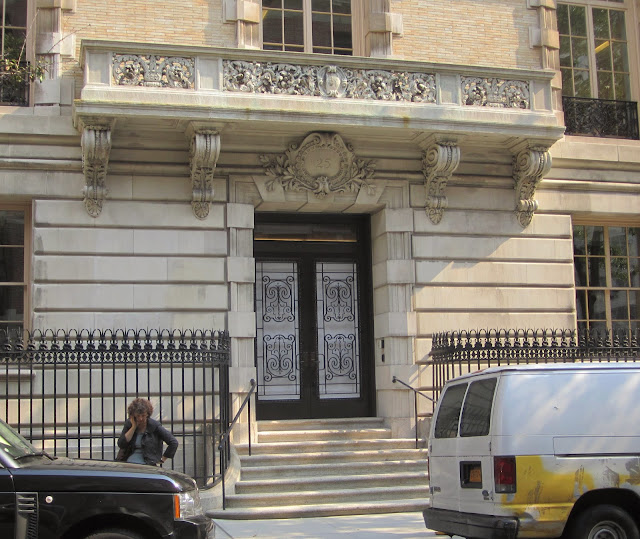 Here's a detail of Stanford White's iron railing, yet one more good reason to love big old houses. Not many people would bother with this sort of detail today, or even notice if it were missing. 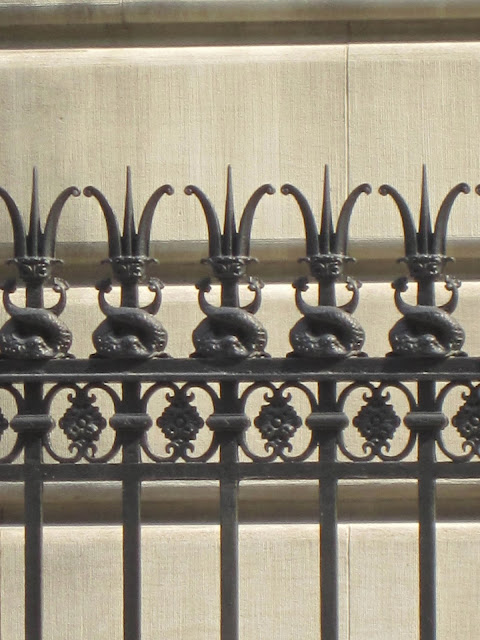 Mamie's house in Newport, not designed by Stanford White, as I have thought for many years, but by a man named Dudley Newton, is called Crossways. At first glance, it seems to have survived pretty well. I don't like that modern window in the pediment over the porch, however. Some architect thought it complimented White's erudite Colonial Revival design, but I think it distracts. Worse are the ill proportioned screw-on shutters, for which someone should be taken out and soundly beaten. I know, I know, it's a condo now and no one wants to maintain shutters which actually close to cover the windows. But hey, if I had my way, those ridiculous plastic shutters would be thrown in a dumpster before you could say, "and it was extremely painful!" 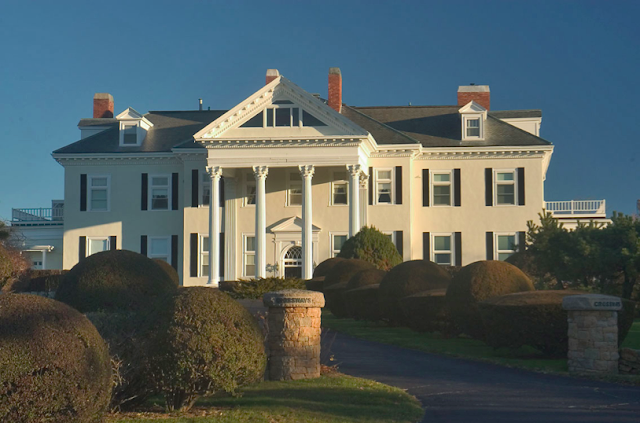