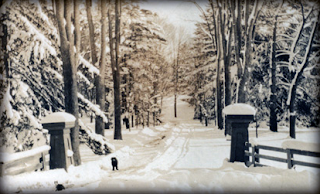 This is the gate to a country place called Maple Grove, located on South Road just outside the City of Poughkeepsie. I'm not sure when the photo was taken, but judging from the ersatz plow job and the vehicular tracks, I'd guess it was sometime before the automobile age. Starting around 1850, South Road developed into an estate district paralleling the Hudson, and until the Second World War that's what it remained. Smart Victorian country places with names like Holmehurst, Cedarcliff, Edgehill, Wilderness, Woodside and Southwood ornamented it half way to Wappingers Falls.


Here's the same gate last week, looking deceptively unchanged. Nothing could be further from the truth. During the second half of the 20th century South Road metamorphosed from a sleepy byway into a howling six-lane boulevard. No longer lined with leafy estates it is today a throbbing artery through the middle of a string of ginormous shopping centers of the type that have effectively killed one old American downtown after another. That Maple Grove survived - bloodied, but unbowed, as you shall see - is largely due to an old lady from an old Poughkeepsie family, who simply had had it with shopping centers. 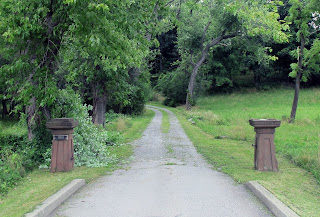 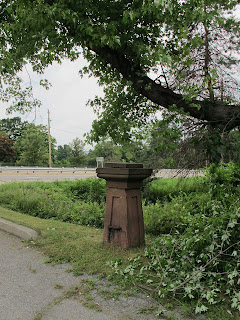 These days, the original approach from South Road is closed to autos. Since driveway approaches are crucial to the Big Old House gestalt, I walked it. Maple Grove's thirty acres of fields and woods, at least from this driveway, seem deep in rural countryside. In point of fact, they are surrounded by an ocean of ranch houses, expressways, condos, mega-malls, big box stores, Holiday Inns, etc. Here on the drive, however, one feels transported back in time. Soon enough, the house appears. 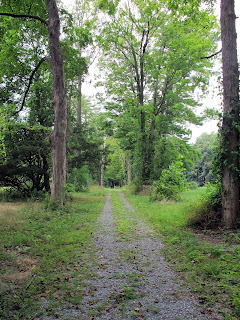 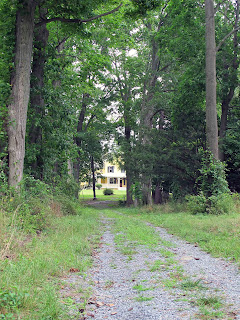 Here's what it used to look like, a provincial gem from 1850, built by a rich New Yorker named Charles Macy. It would be nice if Hudson Valley heavyweights like Alexander Jackson Davis or Andrew Jackson Downing had anything to do with the place, but they apparently did not. Maple Grove was a local job, done by a local guy whose opus - not to mention his name - has been lost in time. 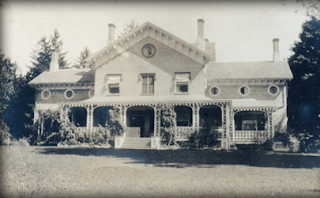 Here's what it looks like today, a result of a series of preservation grants received over the last decade. The apparent condition of the house is analogous to the apparent impression one gets from the drive - neither is what it seems. 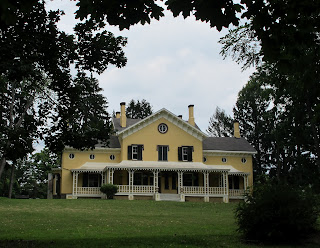 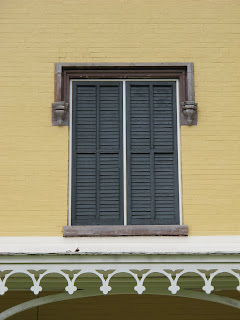 These exteriors do look pretty perfect. The delightful porch with its characteristic Hudson Valley fretwork is over 90% original. The bracketed eaves and the roof are new - for good reason, as we shall see. The bullseye windows on the second floor light the master bedroom. Below it is a drawing room whose tall bay window marks the northern extremity of the house. 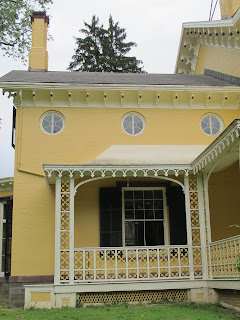 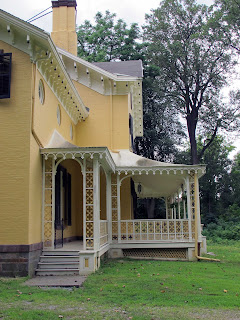 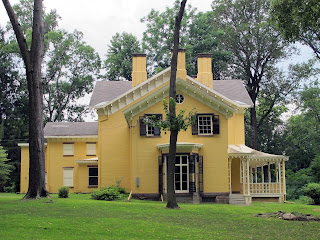 Now we're on the other side of the north wing; the master bedroom is above, the drawing room is below. The larger view in the second image below gives a clue that all is not well. 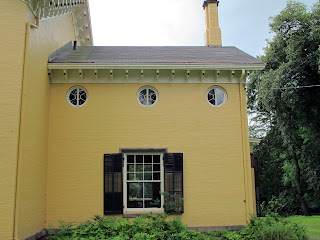 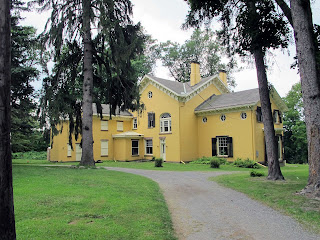 Here's a closer view of the kitchen wing, notable for its suspicious looking blocked up windows. Moving around to the other side of it, we can see what happened. 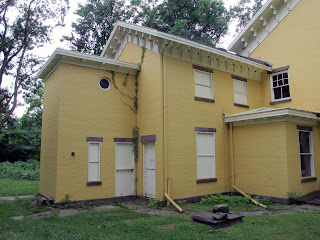 In 1985, a vandal broke into Maple Grove, then uninhabited and used only occasionally by the owner, and purposely started a fire in a second floor servant's room. The results were catastrophic. Portions of the brick exterior wall collapsed into the kitchen (the new brickwork is obvious), the whole kitchen wing plus the southern end of the main part of the house were gutted, and except for a section directly over the master bedroom, the entire roof burned off. The second image below shows some of what was lost. 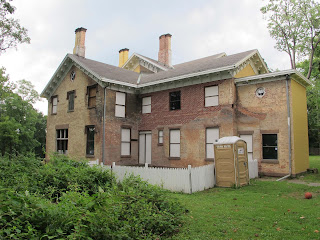 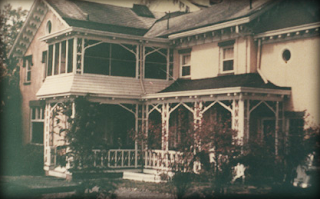 The owner at the time of the fire was Miss Elise Kinkead, a 91-year-old lady who lived across South Road on an estate called Southwood. Maple Grove had been in her family since her grandparents bought it in 1870. Although she had never lived there herself, she had kept it up since inheriting it in 1955 from her cousin George. Elise Kinkead was the last in a long line of Poughkeepsie Kinkeads to live on South Road and was apparently disinclined to let a family property perish. She had more property than money, but that didn't stop her from having the fallen walls rebuilt, new floor and ceiling joists constructed, sub-flooring installed in the gutted sections, and a new roof put on the whole building, the latter complete with correct reproduction brackets. The porch views below show later restoration work, none of which could have happened were it not for Miss Kinkead.
Posted by John Foreman at 12:57 PM