Not really a house 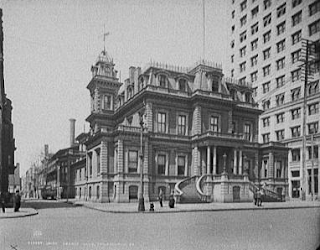 My daughter was married last weekend in Philadelphia at the Racquet Club, a fine Georgian Revival building designed in 1905 by Horace Trumbauer - a gratifyingly imposing venue. I got teary walking my girl down the aisle, kissing her goodbye and shaking the hand of her new husband. Guests and wedding party were billeted both at the Racquet and at the nearby Union League Club, pictured in the vintage view above. Judging from the early skyscraper behind it, I'd date this view from slightly before the First World War. 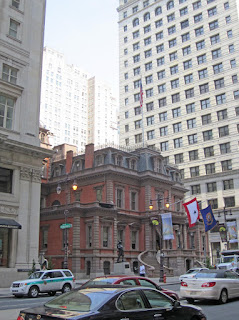 I've been curious about this fantastical building for years, so jumped at the chance to stay here. The Philadelphia Union League was designed by John Fraser (never heard of him) and purpose built as a club in 1865. It could just as well have been a grand private residence. Its design was inspired by - indeed named after - the French Second Empire (1852-1870), a rocky period of that nation's political past characterized by a despotic emperor (Napoleon III), an oppressed population, and extravagant domestic architecture characterized by, among other things, mansard roofs, quoins on the corners, paired columns, ornate towers, and iron cresting at the roofline. This is the sort of house Orson Welles' Magnificent Ambersons lived in, one that hurtled downhill as soon as the Addams family moved in. The grander versions of these houses are absolutely huge - inside and out - the more so considering people in the 1860s were just a little over three quarters of our size today. 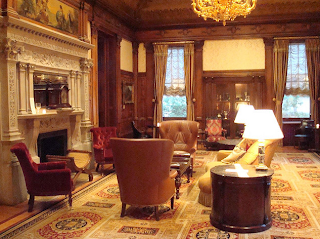 During the Civil War there were "Union Leagues" all over the country, organizations founded by prominent men in rich urban areas for the purpose of supporting - morally, psychologically and financially - the northern war effort. Philadelphia's Union League is the oldest. The building is still a private club, its vast halls hung with presidential portraits and oil landscapes. Salons like this are reserved for dues paying members. A 1910 annex, also the work of Horace Trumbauer and his chief designer Julian Abele (the first black graduate of the Ecole des Beaux Arts, by the way) houses a dozen or so ornate banqueting rooms and 67 smartly renovated guest rooms open to anyone with a valid credit card. 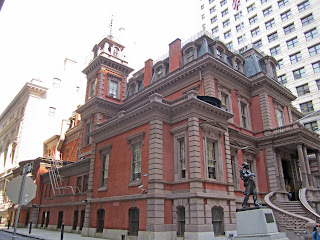 How about this place? It could just as easily be looming over the Hudson River at Hastings, or hunkered down on Cleveland's Euclid Avenue, ca. 1900. Pretty much everything that hallmarks the Second Empire style is visible on the exterior of this building. A random collection of smaller buildings once occupied the rest of the block until the club's annex replaced them in 1910. That's the back of the annex abutting the original clubhouse on the left. 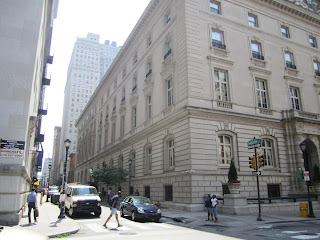 This view of the Trumbauer addition, a Beaux Arts opus in pale limestone, was taken from the corner of 15th looking east towards Broad. The distant sliver of red at the far left of the building is a portion of the original brick clubhouse on Broad Street. Trumbauer's work is redolent with the air of refinement and restraint, albeit tempered with understated opulence. Certain club members in the past lobbied to rebuild the old clubhouse to match the new, but happily nothing ever came of the plan.
Posted by John Foreman at 10:58 AM