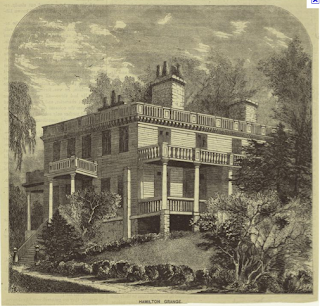 All my life, I have had recurrent dreams in which I find myself walking through northern Manhattan during its rural-suburban period. This would have been around 1880 to 1900. I remember one in particular which was so vivid I was convinced I was looking at a house in the woods at 181st Street for a specific and mysterious reason. I actually made an appointment at the New York Historical Society to see if I could find a picture of it. (No luck, alas). The drawing above is a newspaper illustration from the period of my dreams showing the Grange, Alexander Hamilton's country place in the Harlem Heights. When built in 1802, it stood at what is today the intersection of 143rd Street and Hamilton Place. The same year this house was finished its architect, John McComb Jr., and his partner Joseph Mangin, won a competition to design New York's new City Hall. Hamilton loved his house but didn't enjoy it for long. Aaron Burr shot him dead in 1804. 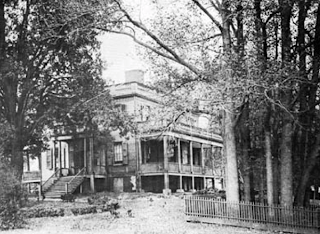 Hamilton bought thirty-two craggy, largely un-farmable rural Manhattan acres in 1799. His architect gave him a delicate, not-very-big, Federal style retreat notable for fine proportions, welcoming porches, and an elegant roof-line railing. Quite a number of these graceful old places once commanded fine river views from woodsy heights on old Manhattan. By the time the photo above was taken, however, Hamilton's Grange had been encircled by the booming city. 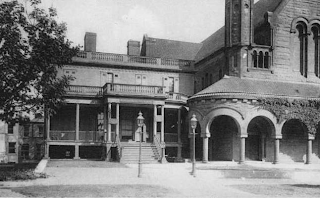 By 1889, St. Luke's Episcopal Church had despaired of staying in its longtime West Village neighborhood. The old streets were suddenly awash with new immigrants and increasingly disfigured with tenement houses. The wholesale collapse of northern Manhattan country estates was simultaneously under way, so the church jumped in, purchased the Hamilton property, and subdivided it into lots on which they encouraged a better class of dwelling. The result was Convent Avenue, a beautiful street to this day. In 1895 the new St. Luke's rose on the corner of Convent and 141st. Until it did, however, the congregation held services in the Hamilton house, which they had relocated to a skinny lot on the east side of Convent just north of 141st. The image above shows the old house squashed between the new church on the south and a lot line on the north. 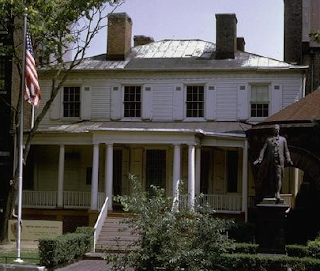 When Hamilton Grange was first moved, its front door faced south onto an empty lot that soon would be the site of the new St. Luke's. When that building went up, the Grange's original entry porch was shaved off and the front door blocked. What faced Convent Avenue for over a century was the side wall of the Grange, whose porch in 1802 no doubt gazed across the glittering Hudson to the virgin cliffs of New Jersey. The view above shows the house in the 1960s, looking about as battered as the rest of the neighborhood did then. Note the disappearance of the roof-line railing and how that changes the look of the place. 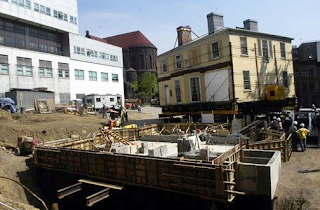 For most of the last century, everybody involved with - or living near - the Grange knew its location was perfectly terrible. The decision to move it into nearby (a half block away) St. Nicholas Park seems so obvious one wonders why it didn't happen generations ago. This shot shows the house approaching its new foundation, located just below 141st St. on the north side of the park. That's St. Luke's in the left background. The bow window with the ghost of the missing porch is on the facade that faced Convent Avenue. The original front door will be reconstructed on the right side facade, which was pressed against the wall of the church for over a century. 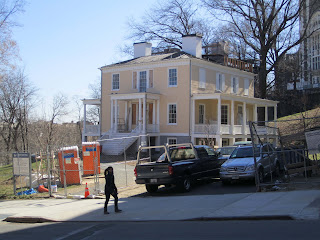 Here's what the house looked like last March, settled on its new foundation, original front door back in operation, but much work remaining. 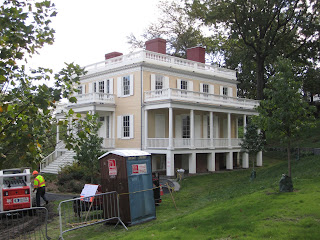 Here it is before last week's blizzard. Pretty remarkable, no? 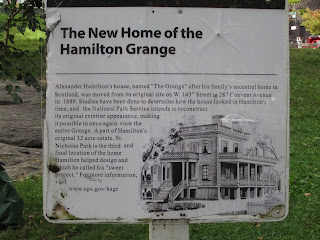 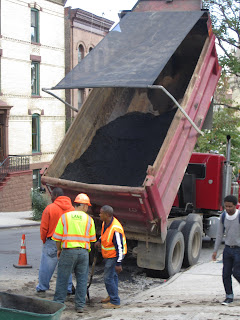 They're paving the drives.... 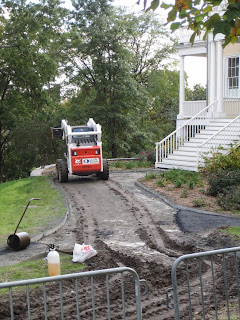 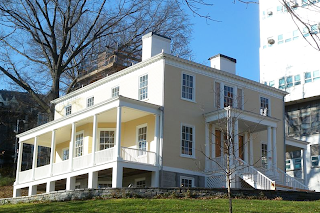 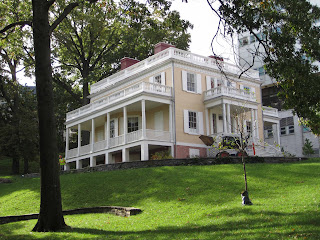 The house today.
Posted by John Foreman at 11:26 AM