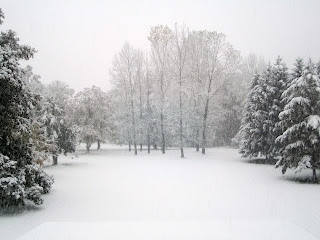 Compare the image above, being the lawn to the west of Daheim as seen from my bedroom window, to the first photo in the post below. Same lawn, same angle, but what a difference a week makes. I was going to dress up this evening - fake whiskers, bandanna on my head, loud shirt, beach bum shorts - for a Halloween bash at the Mashomack, a club in not-so-far-away Pine Plains. That plan's in the toilet since there's already a foot of snow on the ground. I read in some accounts that we face a future of increasingly frigid winters due to ocean currents altered by global warming. 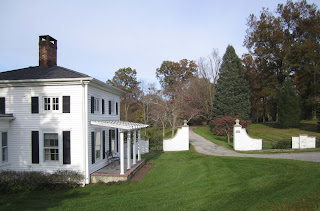 This is a post about the necklace of estate gates that surrounds little Millbrook. The village was developed in the early years of the Gilded Age as a service center for surrounding estates, and to a great extent it remains so today. We're surrounded not just by gates, but by gates to real estates. I love reading real estate ads about two- and three-acre "estates." I mean, who is kidding whom? You want to talk estates? You need not just a house, but a farm, cottages, serious gardens, acreage in fields and woods, ornamental drives and a gate with presence, and preferably a gateman's lodge attached. The image above is the gate to Thorndale, home of the Thornes of Millbrook, who have occupied the house beyond for almost two centuries. 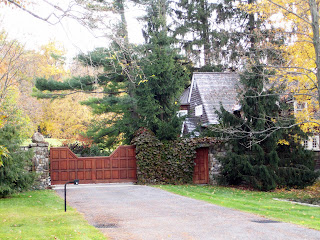 Here's the gate and gate lodge at Altamont, located on the other side of the village. The original main house was a Victorian pile that went up in the 1880s, burned down in 1929, and was replaced with a restrained Georgian manse in white painted brick. Altamont, which has had a spotty history, is now owned by a low profile financial mogul who has restored house and estate to a level that substantially exceeds the original. 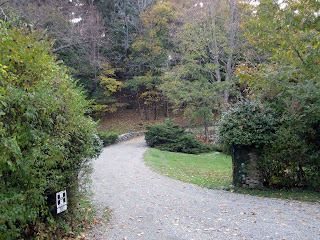 Here's the entrance to Brookside, practically next door to Altamont. This property never exceeded 20-odd acres, but it is so elegantly laid out with fine drives, cottages and stables that it qualifies in my book as a proper estate. Brookside's main house is a roomy stone, stucco and half-timber affair that would be at home in Tuxedo Park. (It's also for sale). 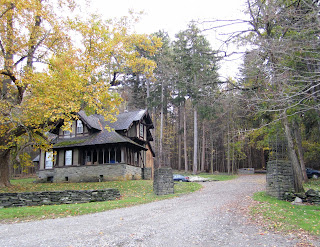 The gate lodge to Thorncrest, pictured above, is now the home of the Dutchess Land Conservancy. More Thornes lived here at one time, on land located just across the Dutchess Turnpike from Thorndale. Thorncrest's main house was pulled down over sixty years ago, a great shame as it was Millbrook's original gentleman's country estate, once grander even than Thorndale. The acreage remains essentially intact, traversed by barely passable roads, the house site buried in underbrush. 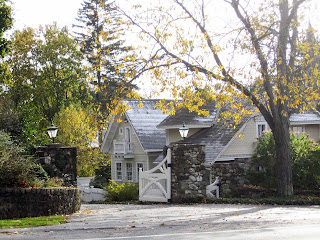 The gate and lodge for Sandanona is at the top of Millbrook's main street. The present owners of the old gate lodge have doubled its size, which does not detract from the sense of drama one would have got on entering this place back in the day. The main house was torn down in the 1960s, a bad era for big old houses. Evocative remnants - stone walled drives, garden ruins, and a quite grand secondary residence built for the original owner's son - survive alongside new suburban houses and a condominium complex near the main gate called Millbrook Hollow. 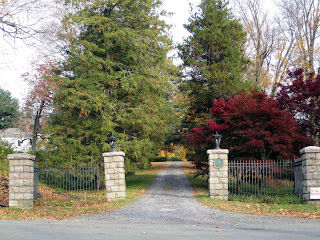 The drive behind these gates leads to a charming old house called Breeze Hill. This driveway was originally part of the Dover branch of the Dutchess Turnpike, which was paved, straightened and slightly relocated in 1926. The relocation presented Breeze Hill's owner at the time, Mrs. Miles Standish, with the opportunity to turn the old roadbed into a new driveway, and to ornament it with fine gates. She was a fussy old lady, we are told, and insisted all the stones be exactly the same color. Local mason Rodrigo Ciferri located an enormous boulder on a nearby farm from which he chiselled every identically colored stone on the posts in this view. The original iron gates seem to have been a casualty of the passing years. The standard on the left has been leaning, Pisa-like, for all thirty of the years that I've been in Millbrook. 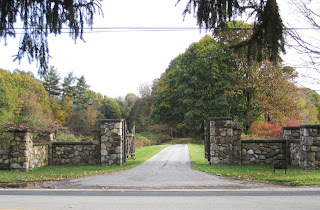 The big house at Edgewood, owned for many years by Harry Harkness Flagler, son of Rockefeller partner Henry Morrison Flagler, was also a victim of the 1960s. The property itself, however, survives in the hands of just two owners, each of whom owns approximately half. The sweeping drive to the house site is still intact, still well maintained and singularly impressive. One owner lives in a Frenchified 1980s pavilion on the west side of the original estate; the other lives in a cleverly converted garage on the east. An immense walled garden survives, evocative of another time. 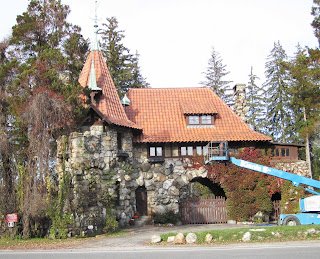 Of the eight gates in this post, five still guard grand surviving estates. The grandest of these is probably Daheim, located immediately north of the village. My house, the original main house at Daheim and the subject of many posts below, lies about three quarters of a mile beyond this gatehouse. To pass through the portcullis, cross the artificial lake beyond via a fine stone bridge, then penetrate ever deeper along maple lined drives is to truly enter another world. This is the true purpose of a country estate, to transport one to a more perfect world. Alas, the Daheim gatehouse is so prominent my landlords elect to keep it closed lest we be besieged by tourists.
Posted by John Foreman at 3:17 PM