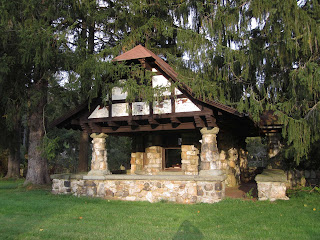 Once upon a time, there used to be a tennis court on the lawn in front of Daheim. Frankly, from an aesthetic point of view, this was a pretty loony place to put it. However, there it sat, spang in the middle of the view, surrounded by statues and boxed trees and flower-lined graveled paths, none of which was particularly enhanced by its presence. Then came many (many) years of desolation and lack of maintenance, during which the lawns around the court - indeed, around the whole place - turned into fields. Those fields crept across the old clay court obscuring it completely, and by the time I arrived in 1981 the tennis court had vanished under a lawn. What hadn't vanished was a charming, if very down at heel, tennis pavilion. 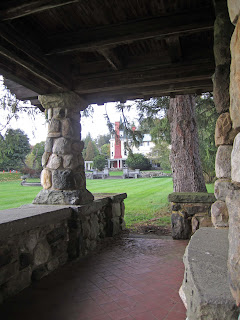 Here's a glimpse of Daheim from the porch of the tennis house, giving a sense of the buildings' relationship to one another. 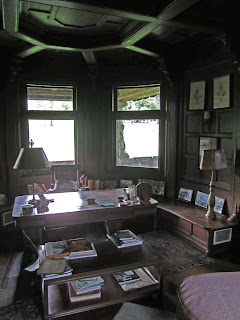 In the 1960s, Tim Leary's hippies rechristened it the "meditation house," although I doubt much clear thinking went on here. By the time I arrived, the windows were mostly broken out, the roof leaked like a sieve, and the woodwork was gray with water damage. My landlords put a quick budget roof on the place, I scrubbed down the oak paneling with linseed oil and turpentine, had the windows reglazed, and turned it into a writing house. I wrote "The Vanderbilts and the Gilded Age" at this desk. 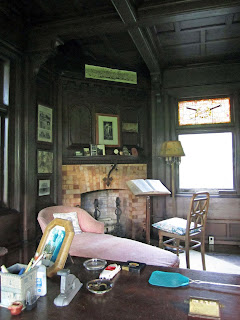 Here's the view in the other direction. I've never dared to actually light a fire in that fireplace. The chimney is surrounded by the huge limbs of towering evergreens and God only knows what shy fur bearing creatures of the forest live in the flue. 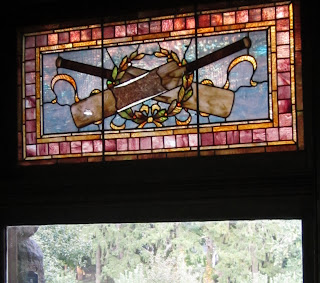 All the stained glass panels were smashed with the exception of this one. Not sure what cricket bats had to do with tennis, but they are a decorative motif. Back in the day, the tennis house would have provided storage for racquets and nets, cushions for outdoor seating, a marble basin (still in the closet) for washing up, and a place to sit inside and maybe even change. 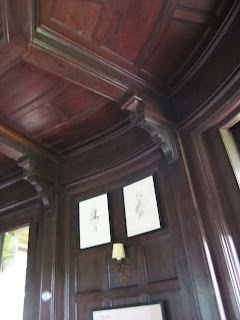 Here's a detail of the ceiling. I haven't used the tennis house in almost twenty years, but every few months I have Antonia trek across the lawn - actually, she drives her Jeep across the lawn - and gives it a thorough cleaning. I have a book project I've been thinking about for years and since I've resigned from writing "Old House" articles for the Millbrook Independent, I think I'm going to start writing it out here. 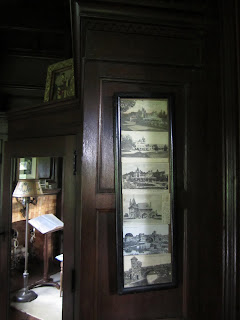 Daheim was the subject of many postcard views in the early twentieth century. This framed collection is by the door. 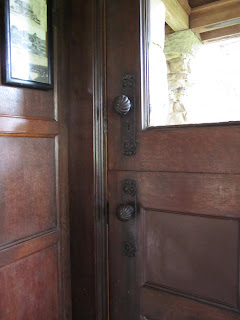 This detail shows the door hardware, which was originally painted shiney black. The oxidized surface is now covered with clear varnish. 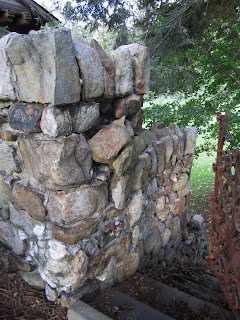 Immediately to the south of the tennis house is this stair which descends from the tennis lawn to a walled orchard below. The bulging stonework, sadly, has been like that for years. 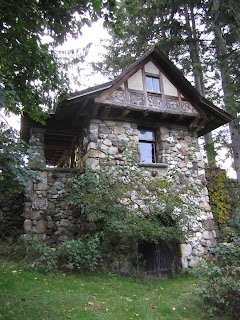 Here's the other side of the building, seen from the walled orchard below. 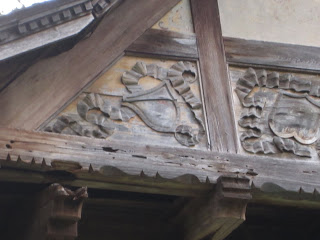 The gable ends were once elaborately painted, but not many traces remain. 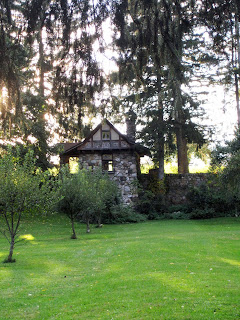 The orchard itself was once a hugely elaborate millionaire's garden, with an extensive range of greenhouses facing the tennis house across two acres of closely cultivated flowers and vegetables. Those two acres today are just a lawn, planted with fruit trees and surrounded with an immense palisade of century old evergreens.
Posted by John Foreman at 1:24 PM