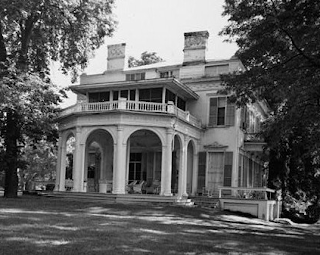 Among this weekend's mail was an invitation to "Experience the Splendor of the Season" at a benefit cocktail for Montgomery Place in nearby Barrytown, New York. The first time I saw Montgomery Place, which must have been over 25 years ago, it looked like the image above. This was a house as full of treasure as it was of history, and it had (for me anyway) a most appealing veneer of slightly rundown shabbiness that comes of actual use. What educated restoration expert would tolerate for a nanosecond that ad hoc screen porch sitting on top of the piazza? Answer: not one. And yet, this was doubtless a pleasant place to sit - or probably sleep, on hot summer nights. It is just the sort of thing old WASPy aristocrats slap onto family manses, heedless of the effect on architectural purity. 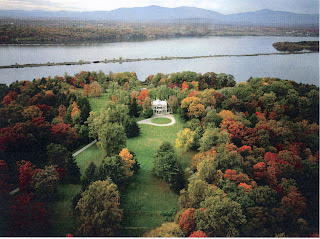 Here's today's restored Montgomery Place from the air, illustrated on the cover of the invitation for the cocktail on October 8th. If I can muster $200 from my beleaguered horse budget, I'll go. Its preservation is certainly a good cause. These old river places are redolent with an almost aromatic atmosphere of a vanished time. Oh, the river views and mountain vistas are in many places still intact, but the original sense of being in a gracious home belonging to sophisticated people and located in the middle of a tractless wilderness is no longer acute in the era of the internet and the Interstate. The original remoteness of a house like Montgomery Place once put a delicious edge on its luxury. 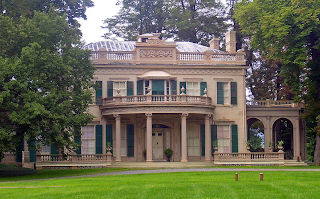 Here's the front of the house today, which is not at all what it looked like when Janet Livingston Montgomery built it in the late 1770s. She took occupancy in 1805 and, in the Francophilic style of haute monde Americans like the Livingstons, named it Chateau de Montgomery. This probably caused some amusement among visiting Frenchmen, as your basic European chateau at the end of the 18th century was a sight grander than Mrs. Montgomery's house. Nor was the building remotely as ornate as it appears in the image above. Its builder died in 1828, leaving it to her brother Edward Livingston, who died in 1836. He calmed the name down, rechristening it Montgomery Place, but it was his widow, Louise, who in 1844 hired the famous Alexander Jackson Davis to tart the place up, with entirely beguiling results. 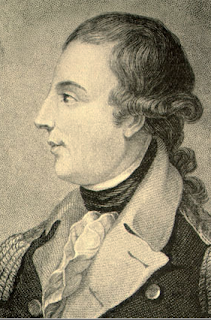 Here's General Richard Montgomery himself, the namesake of Montgomery Place, killed by a cannon ball on New Year's Eve, 1775, at the battle of Quebec. One hopes he was a man of more substance and, well, grit, than this image would have us believe. My, but he looks vacuous. I am no student of the American revolution, but it is troubling to read of Montgomery's unsuccessful attack on fortified British positions at Quebec, in the middle of a blizzard. It was America's first major defeat in our war of rebellion. Many men died at Quebec, and for some reason Montgomery is remembered as a hero. 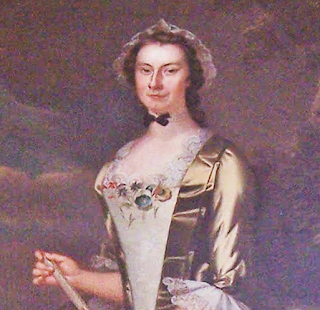 Old portraits are not always dependable likenesses, but I suspect the painter of this one captured Janet Montgomery. She looks to me like just the sort of woman who will declare her dead husband a hero, and dare anyone to contradict her. Unfortunately, a reader's comment below has established that this is not Janet Livingston at all, but rather her mother. (Drat! There's always someone who ruins good story!) 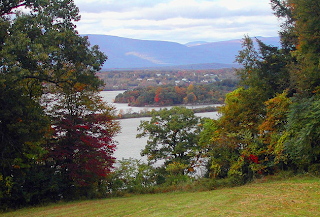 The restored interior of Montgomery Place is like... I was going to say "a page" but it's really like an entire issue...of Architectural Digest. The curtains, the antiques, the wallpapers, are all exquisite. It is beyond improbable that the Delafields, they being the last family members to occupy the house, lived in anything quite so well maintained. The views are equally wonderful, and the estate still encompasses over 400 acres of woods, historic gardens, charming outbuildings, and a producing orchard of some scale. 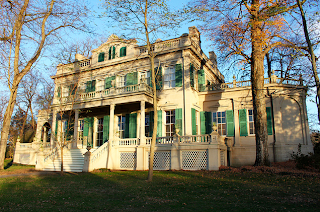 The family sold Montgomery Place in 1986 to an organization known today as Historic Hudson Valley. In the early 1990s, after a multi-million dollar restoration, it was opened to the public.
Posted by John Foreman at 7:41 PM