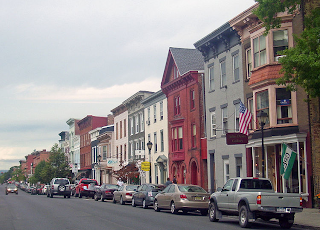 During 30 years in Dutchess County, I haven't had many occasions to visit Hudson, a small Columbia County city on the river about an hour north of Millbrook. I had lunch there on Sunday, after a morning in nearby Hillsdale writing captions with the photo editor of my upcoming book. After lunch, I took a drive around. Heretofore, when I have thought Hudson, I have thought 19th century skyline, gay antique shops, gay art galleries, gay gentrifiers from New York, and a lot of locals on welfare. Well, of course it's much more than that. The view above is of Warren Street, the main drag that runs from the railroad station on the river bank to the top of town at Route 9. It's lined with an altogether appealing inventory of low rise commercial buildings, many of which were vacant for years before a recent renaissance, which must have been in swing now for about fifteen years. 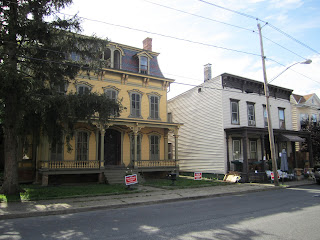 These houses are on Union Street, which parallels Warren a block to the south. Much of Hudson has a sort of "Hello Dolly" look to it, architecturally anyway. Hudson dodged a bullet recently when a villainous multi-national called St. Lawrence Cement attempted to plonk down on the riverfront a cement plant only slightly smaller than the principality of Liechtenstein. Besides befouling the air with smokestacks taller than the Empire State building and poisoning the river with runoff, this highly automated installation would have added a grand total of only one job to the local economy. Having watched Union Carbide get kicked out of Bhopal, St. Lawrence probably figured defenseless little Hudson might be worth a shot. Some of the locals actually supported this absurd plan, although whether from ignorance or other reasons is unclear. Kick around those transplanted New Yorkers all you will, but without them God only knows what Hudson would look like today. 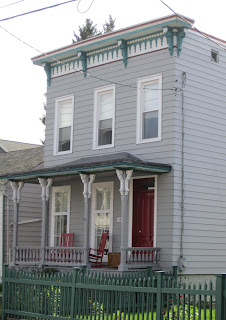 Hudson is full of places like this appealing little house on Union St. 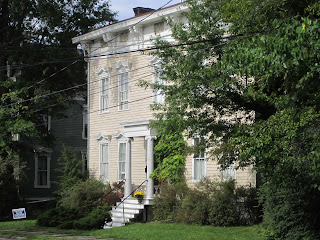 Interestingly, as you move away from the river, the architecture gets grander. Hudson was chartered in 1785 and pioneered by of all people, whalers from Nantucket and Martha's Vinyard. By 1820 it was the 4th largest city in New York State, and center of a thriving whaling industry. This house on Allen St. speaks to Hudson's mid-19th century prosperity with an architectural accent that's part Greek Revival and part Italianate. 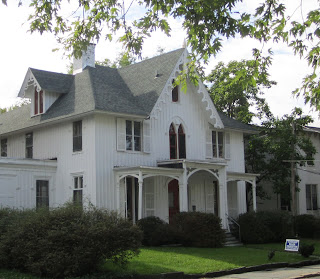 Pa could be around back getting his pitchfork right now, while Ma gives her bun one last twist. This Gothic Revival board and batten house on Allen St. must have been an architectural "dernier cri" when it was built, which I'm guessing was sometime in the late 19th century. 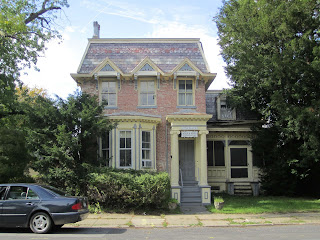 You have to love American Victorian architecture. Whoever designed this little house threw literally everything in the pot. 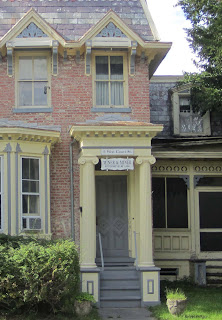 Engaged dormers, a mansard roof, Italianate brackets under the eaves, a Greek porch with Ionic columns... what did this architect forget? Apparently nothing. 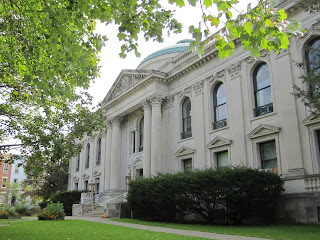 The little house above faces a park presided over by a very fine 1909 Beaux Arts courthouse. I couldn't resist taking a few shots. The City Beautiful Movement of the early 20th century reached up the river and blessed even Hudson with this fine building. 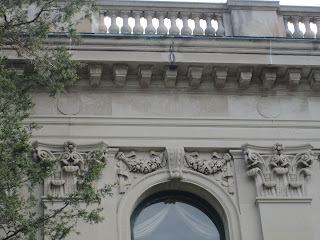 Here's an exterior detail of the courthouse. The building appears to be relatively intact despite modern day accumulations of aluminum replacement doors, handicap entrance ramps, and security barriers. At the beginning of the 20th century Hudson was famous for whores and gambling, its riverfront red light district attracting visiting firemen from far and wide. One imagines the courthouse got a lot of use back then... or, maybe it didn't. 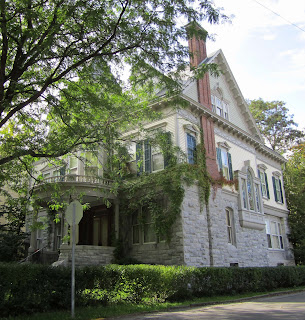 This elaborate late Victorian concoction faces the courthouse on the west. 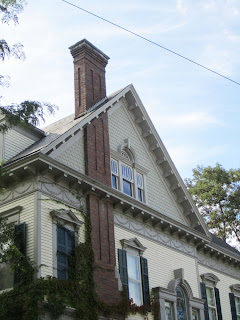 Here's a detail of the north facade of the house above. Not one, but two Palladian windows, the lower no doubt overlooking an elaborately paneled stairway, enliven this elevation. A happy disregard of symmetry governs the placement of chimney and stair window alike. And who would have thought to put Adam swags under the bracketed eaves? Taken together - and disregarding for the moment that whoever designed this house created a maintenance monster for future generations - the architectural composition is as interesting to the eyes of passersby as it is no doubt endearing to the heart of its owner. 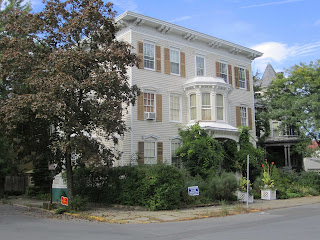 Here's the house next door. Hudson's old house inventory is nothing if not full of variety. 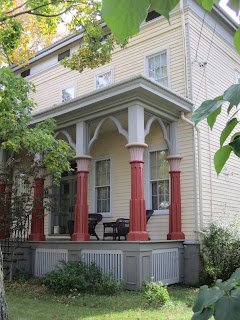 Speaking of which, how about the Egyptian columns on this Allen St. house? If we didn't know better, we'd suspect the owner pirated them from the Luxor in Las Vegas. No doubt there's an interesting story here somewhere. 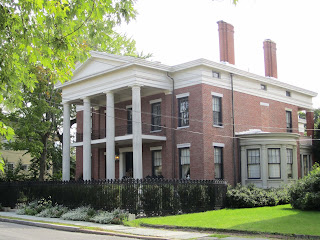 There's a lot I like about this house, located next door to the Egyptian porch, including its handsome old-fashioned fence (complete with anthemia finials) that appears to be quite new. To my eye, this is a scholarly architectural essay on the Greek Revival done by a local architect in the 1920s. There's just something about it that doesn't look old - at least, not 19th century old. I wonder if I'm right.
Posted by John Foreman at 1:11 PM