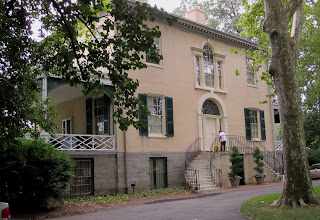 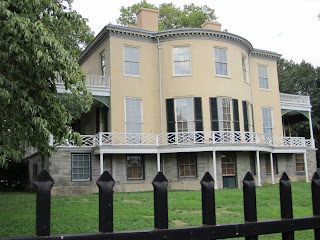 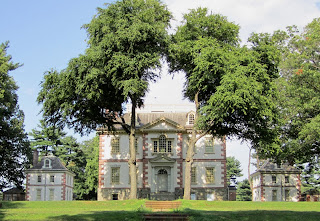 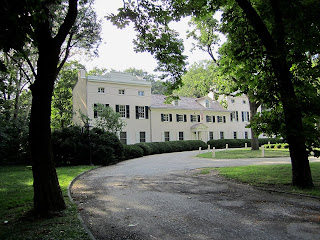 I had an epiphany yesterday while exploring Fairmount Park. Starting in the 1840s the city of Philadelphia began protecting the wooded banks of the Schuylkill River - immediately north of downtown - from the industrial blight and pollution that befell, for example, the shoreline of the East River in New York. Amazingly, Fairmount Park is still dotted with delectable country houses that have overlooked the river here since the 18th Century. I suddenly realized that this charming wooded riverfront - charming even taking into account the highways and the "iffy" public park maintenance - must look today very much like the East River bluffs on Manhattan's Upper East Side looked two centuries ago. Gracie Mansion would fit right in to Fairmount Park. So would Hamilton Grange, for that matter. There are an astonishing number of these old houses too. The first 2 images show my "hands down" favorite, Lemon Hill, built in 1800, and located immediately north of the Philadelphia Art Museum. I love the Palladian window on the entry facade. The 2nd image shows the exterior articulation of two divine oval rooms on the first and second floors that overlook the river. The 3rd image is of Mt. Pleasant, built a bit upriver in 1762 by a rich Scotsman named Macphearson. It was once owned by Benedict Arnold of all people. Image 4 is of Strawberry Mansion, named after an agricultural enterprise of a mid-19th Century owner. The original Georgian house is in the middle and dates from 1790; a judge named Hemphill added the Greek Revival wings. The eastern edge of the park is about the equivalent of 3 city blocks away. On the other side of it are boarded up stores, burnt out row houses, and a set of magnificent gates to the Mt. Vernon Cemetery whose lawns have degenerated into tangled hayfields.
Posted by John Foreman at 3:09 PM