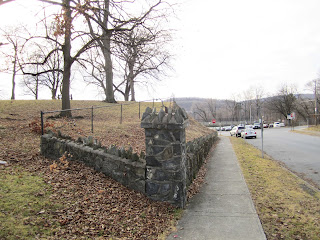 Poughkeepsie, NY, like most old cities in our part of the world, is full of mysterious stone retaining walls. I often wonder what used to be behind them, before today's mini-marts, parking lots, office buildings, subdivision houses, and (usually funky) "garden apartment" complexes. The one in the image above borders a short street called Dongan Place, located a block east of the Poughkeepsie Amtrak station. Just as nature abhors a vacuum, so Poughkeepsie's city fathers have abhorred the emptiness of the space that miraculously survives behind this wall. Since 1949 they have repeatedly tried to fill it, first with low income housing projects and, more recently, with a proposed mix of retail and (presumably) higher income housing. 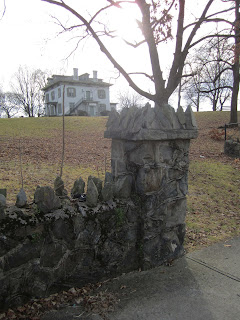 They have failed so far because it is a public park, destruction of which requires state level legislative approval. To date this has not been forthcoming. The beleaguered patch of lawn in the image above was once a small estate that still contains its original Italianate mansion. Called Hill House, it was built in 1859 for George and Charles Pelton, a pair of rich Poughkeepsie carpet manufacturers. Charles got married; George never did. They all lived together at Hill House, dying one by one, until family heirs sold it to the City of Poughkeepsie in 1910. A $4000 bequest to the city from a deceased believer in what at the time was called the American Playground Movement enabled the municipality to put together the $10,000 purchase price. The posthumous donor's name was Mrs. Charles Wheaton, and it seemed appropriate to rechristen the place Wheaton Park. 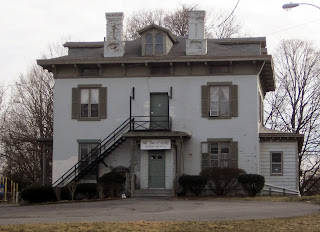 Oh, the indignities old houses suffer. Old people too, if you think about it. Those of us in our sixties may find it sobering indeed to gaze upon Hill House, with its awful screw-on shutters, flaking paint, filled-in porches, macadamized lawn and brutal fire escape affixed to its facade like a giant carbuncle on the nose of a beloved aunt. OK, OK, I'm overdoing it. More important than aesthetics is the fact that, for the last one hundred years, this house has been of invaluable service to the neighborhood as a day care center. Since its founding in 1907, the Poughkeepsie Day Nursery has helped legions of young parents who might otherwise have been in grave difficulties. It's not the Nursery's fault that neither they nor the City of Poughkeepsie has the funds to properly maintain Hill House. 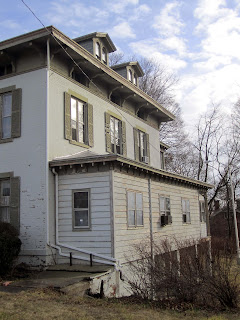 This of course was once an open porch affording sweeping views of the Hudson. 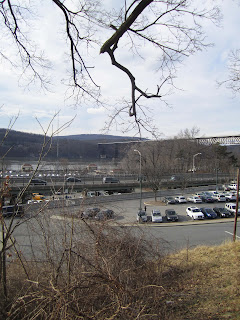 Those view, alas, have been compromised by an Amtrak parking lot and four elevated lanes of roaring traffic on Route 9. The bridge in the distance is the Poughkeepsie Railroad Bridge, opened in 1889, derelict and dangerous by the 1990s, but restored recently as a pedestrian walkway that is terrific fun. It's our local High Line. 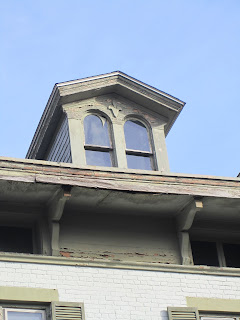 My heart goes out to the Day Nursery for those eaves. I have so been there. 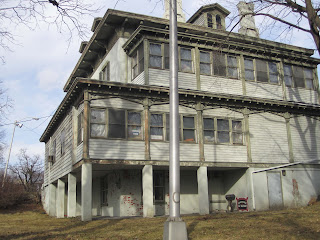 Here's the other side of the house, showing how the porch wraps around. I can well imagine it with awnings and wicker and potted palms. The upper deck looks to me like early 20th century work - basic ideas intact, but details simplified. In 1951, Day Nursery Director Josephine Talbot described the view from this porch as an education in itself for the children. "There is the river with the mountains in the back. The leaves are turning now and they'll want to know why. Ships come up the river now and then and we imagine where they're going...to China or Europe or South America. Of course with the railroad station just below, it's a virtual utopia for the youngsters seeing the engines slow down right outside their window." 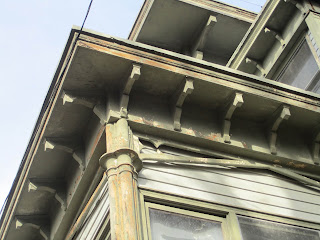 I liked the look of all those brackets. 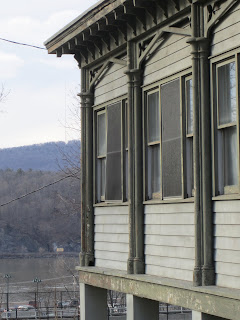 It's hard to get much sense of the past here, but somehow this angle of the porch columns and the glimpse of the river beyond do it for me. 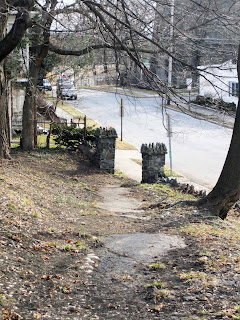 This path leads out of Wheaton Park to a little street called Davies Place, once a rather distinguished place to live. 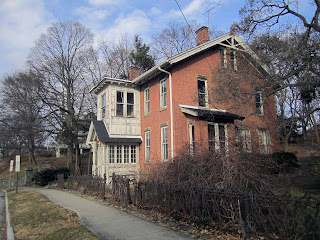 That's Hill House hidden in the distance behind the big tree on the left. The building in the foreground is currently used as a community house by the Church of the Holy Comforter, a neighborhood landmark at the other end of the block. 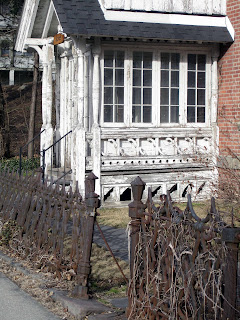 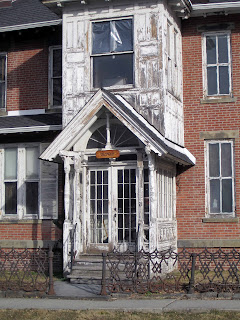 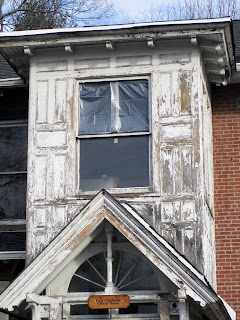 You know money is short when broken windows are repaired with plastic drop cloths. 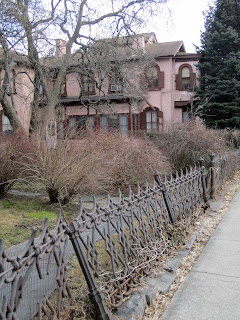 This beautiful iron railing - beautiful in spite of its damaged condition - runs between the church house and a mansion next door. The latter was built in 1860 for a prosperous local builder and one-time Poughkeepsie mayor named William Harloe. 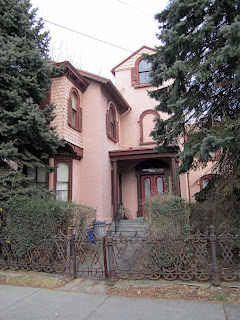 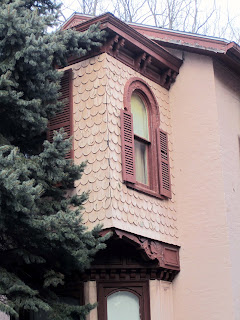 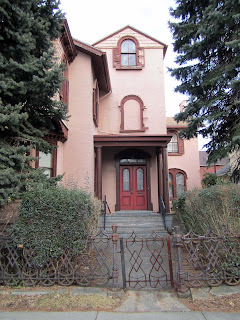 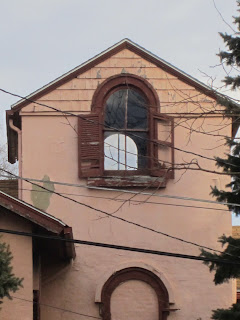 The Harloe house has been divided into three apartments and is currently for sale for $159,000. 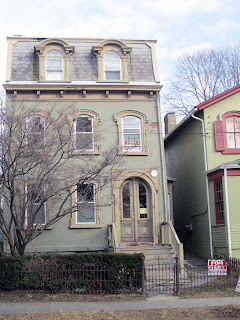 Another house on Davies Place. People are trying very hard in Poughkeepsie, a city brimming with terrific old houses. Many are in neighborhoods where nothing at all is run down and a grand old house will still cost under $400,000. 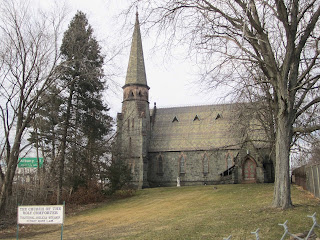 There must have been a building frenzy on Davies Place on the eve of the Civil War. Both the Pelton and Harloe houses were either still under construction or only just finished in 1860 when this church went up on the corner of Davies Place and Main Street. Called the Church of the Holy Comforter, its designer was none other than Richard Upjohn, architect of New York's Trinity Church at Broadway and Wall. Holy Comforter has been on the National Register of Historic Places since 1972. 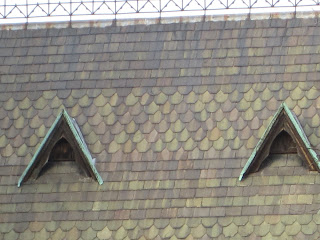 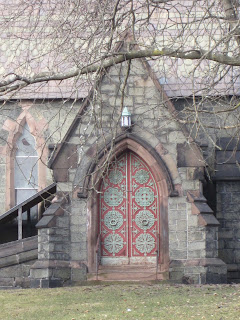 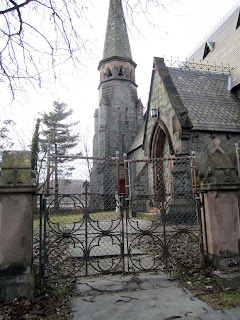 Holy Comforter seems in pretty good shape, all things considered, even though the chain link additions to its wrought iron gate are a little alarming. 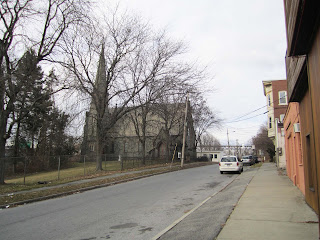 Looking north on Davies Place with the Church of the Holy Comforter on the left.
Posted by John Foreman at 1:10 PM