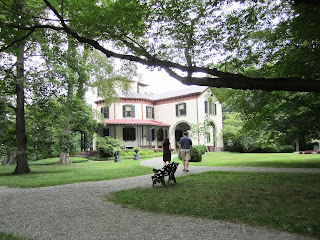 Poor benighted Poughkeepsie - well, "benighted" might be going a bit far. Poughkeepise is quite fascinating, historically and architecturally speaking, even though the downtown has been ravaged by decay and muddle-headed "urban renewal" and formerly pastoral outskirts junked up by strip malls and subdivisions. There probably still are a few people alive who remember South Road, a.k.a. Route 9 south of town, as a country byway lined with spacious suburban estates. Today it's a ten-lane boulevard from Anyplace, USA, lined practically all the way to Wappingers Falls with the type of shopping center that features a 30-acre paved parking lot in front. However, in the midst of this modern wilderness one old mansion survives - Locust Grove, former home of Samuel F.B. Morse, inventor (as he strived to be known) of the telegraph. 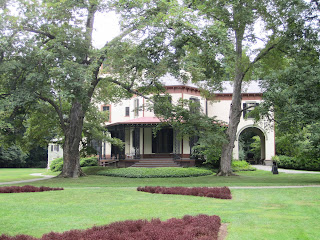 Locust Grove is lovingly maintained and open to the public, thanks to a non-profit trust established in 1975 by the last occupant, Annette Inness Young, whose father bought the property from the Morse estate in 1895. Moderately elaborate gardens, classical urns and geometric annual beds still adorn the grounds. Sweeping lawns run to the edges of dark woods. It seems beyond incredible that the Marriott Courtyard and TJ Maxx are practically next door. Interestingly, commercial development along South Road is really a thin crust that does not extend very far from the road itself. Behind the malls a good deal of untouched forest stretches down to the river. 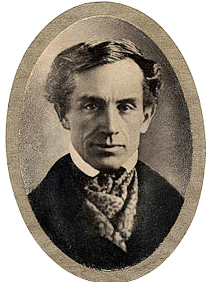 Morse (1791-1872) was a struggling semi-famous portrait painter for much of his life before he struck it rich with his single wire telegraph patents. A number of his canvases - or facsimiles thereof - are on display in an onsite visitors' center. Not to detract from the great man's contributions, the docents at Locust Grove omit entirely any mention of Morse's 19th century nativist politics. His pamphlet titled "An Argument on the Ethical Position of Slavery," published in the run-up to the Civil War, defines America's peculiar institution as "a social condition ordained from the beginning of the world for the wisest purposes." How surprising is it, really, that the same man would call popery "a system of darkest political intrigue," and Catholicism an invasion of America by "the cloven foot of this subtle foreign heresy." Jews and immigrants came off no better. 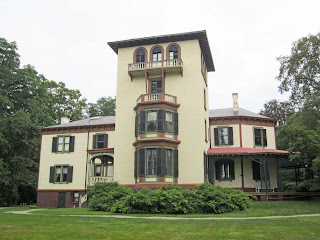 A substantial, Federal-style, 2-story, five-bay center hall country house, built in 1830, was standing on the property when Morse arrived in 1847. He immediately set about renovating it in high Victorian fashion, to the point where the original house was rendered virtually invisible. He put half-octagonal wings on each end, a porte cochere - complete with upper level billiard room - over the front door, and a 4-story Tuscan tower in the middle of the river facade. The Youngs fiddled with the dining room wing at the end of the 19th century, but otherwise the house looks very much as it did in Morse's day. Granted, you have to have a taste for this kind of place, but as a Victorian artifact, Locust Grove is pretty terrific. 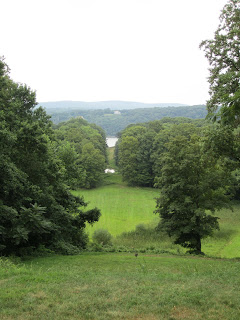 Here's the view of the Hudson from the lawn behind Locust Grove. The average motorist, navigating the wilderness of shopping malls along Route 9, would likely be dumbfounded to learn that a view like this could still be intact around here. The view complements the interior, which is chock full of Victorian furniture, rugs and paintings. Neither Annette Young nor her brother ever married and a lifetime of accumulated possessions resides in their respective rooms. On the one hand, it's kind of wonderful that everything is still here. The house is a monument to the aesthetic sensibility of the Victorian age and to people who believed in throwing nothing out. Alas, it's really dark and ugly inside. We wouldn't want to change a thing, of course, unless we lived there. 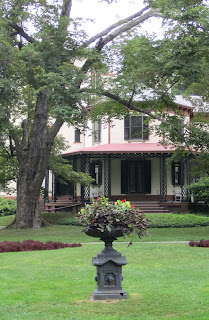 I live in nearby Millbrook, and it took me 30 years to finally visit Locust Grove. It's financed entirely by admissions and the trust, and definitely worth a visit.