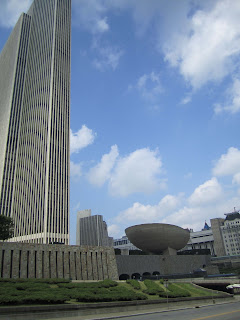 This is Albany, NY, in a view taken last week on our father-daughter vacation. One of the towers of the Empire State Plaza is on the left, and the so-called "Egg," being a state theatre in the ultra-modern style of the 1960s, is on the right. The Plaza is already an antique and to be honest, I kind of like it. 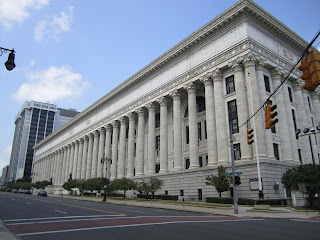 The government buildings in Albany are sensational. The State Capitol was covered with scaffolding last week, but it's already familiar to many people. Less familiar is the extravagant Richardsonian Romanesque City Hall and an adjacent white marble federal courthouse from the 1840s. But even less familiar than these is the State Education Building of 1912, pictured above, an architectural opus worthy of ancient Rome. 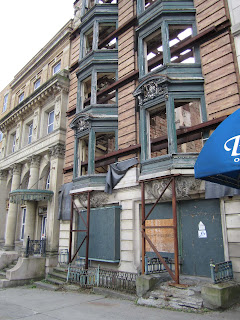 Unfortunately, aside from the grand public buildings Albany is really run down. Well, there are pockets of niceness to be sure, but most of the place lies somewhere between slightly shabby and downright bombed out. These buildings are on State Street, half a block from the State Capitol, two blocks from the Empire State Plaza. 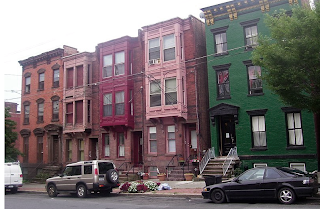 We stayed in an 1880s row house (not one of these), converted to a bed and breakfast, and located directly across from Washington Park. It was a pretty nice neighborhood, although hardly what we'd call "mint." Interestingly, Albany's parks are beautifully maintained even when the buildings in the surrounding neighborhoods look like this. 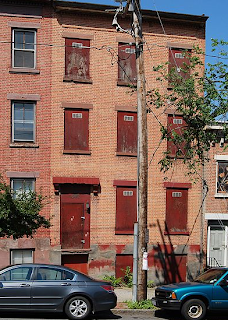 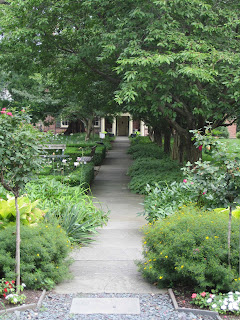 Albany is old, at least by United States standards, and it's been fortunate to preserve a scattering of 18th century country manses. These were long ago engulfed by the city and for a while were ornaments of respectable neighborhoods. Today they are marooned in areas for which political correctness has no vocabulary. Old country places like the Ten Broeck mansion in Arbor Hill, whose garden path is illustrated above, reminded me of the old Peter Sellers movie, "Being There." Remember Chance the gardener, the halfwit with a genius for plants? He made an Eden out of the old man's garden, but when the old man died, poor Chance was evicted into a howling slum that had surrounded his garden without his even noticing. 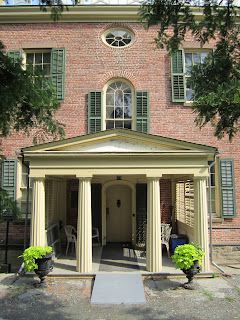 Here's the front door of the Ten Broeck Mansion, located at the end of the path above. How serene it is in its utter disregard of the neighborhood that surrounds it. 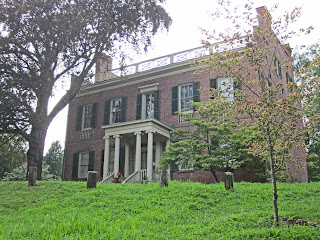 Actually, this is the front of the house, being on the opposite side of the door pictured above. "Prospect," as it was named in 1797 by its builder, Elizabeth Van Rensselaer Ten Broeck, originally faced the Hudson, a view now obscured by the city. It was a fairly straightforward Federal house when constructed. In the late 1820s it got a fashionable Greek Revival makeover, which accounts for the handsome entrance porch. 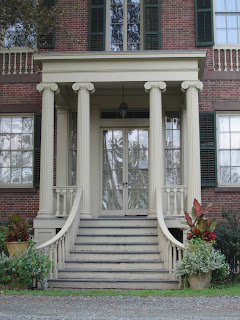 I love the Greek Revival. How beautiful is this porch? 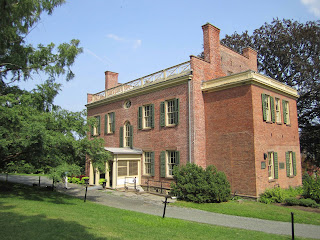 A man named Thomas Olcott bought the place in 1848, and the last of his descendants finally left in 1948. Olcott added a serving pantry with dumb waiter on the main floor - the kitchen is in the basement - and housed it in the wing visible in the foreground above. In the late 19th century, a second floor was added to this wing. You can see the difference in the brickwork. It contained three still intact and fabulously antique bathrooms. Two are ensuite with two bedrooms on this side of the second floor, and the middle bath serves two bedrooms on the other side of that floor. 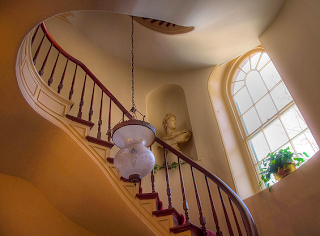 This view gives very partial sense of the main stair, one of the most graceful I've ever seen. The Albany County Historical Society bought Arbor Hill from the last of the Olcotts in 1948 and despite an endless struggle for funds, has managed to keep it looking quite well. But what really brought Chance the gardener to mind were the wonderful grounds. 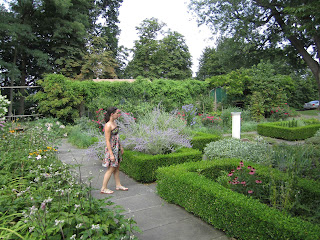 Here's Jazzy walking through the formal garden. She might be deep in the country or in a district of fine suburban estates. (NOT!) 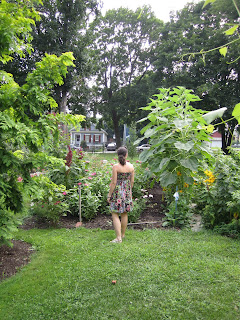 These gardens are maintained by volunteer master gardeners. That's a pretty little house in the distance isn't it? There are some.