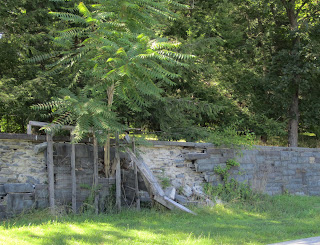 The romance of ruins figures large in poetic consciousness, although it plays an unhappy role in property maintenance. This fine wall just outside the Hudson River hamlet of Staatsburgh flanks the gates to a big house built in 1895 by Ogden Mills. That house is now a part of the Mills Mansion State Park and ailanthus trees are now growing out of Mr. Mills' wall. 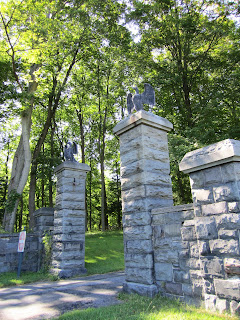 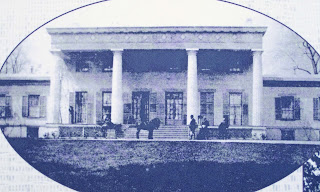 This very elegant Greek Revival mansion used to stand where the present house stands today. The land was inherited by Mills' wife, Ruth Livingston, of the aristocratic Livingston clan. Presumably the Livingstons built this house sometime after 1792, when they bought the land. Mills was the son of Darius Ogden Mills, a man who grew rich in banking and railroads out west. His son, in a pattern repeated by many at the time - and indeed repeated by others today - married into a family that was the apotheosis of American high society. 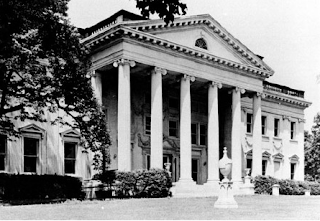 The new house, designed by McKim, Mead and White, actually envelops the old one, the only evidence of which is the second floor windows under the porch plus a bit of the interior finish. The architects planned to do the same thing, with a similar vintage river mansion, for Fred Vanderbilt in nearby Hyde Park. However, Vanderbilt's old house was deemed structurally unsound and razed. The Livingston place made the cut it appears, and it survives - albeit nearly invisibly - inside the body of the new house. Ruth and Ogden Mills were the sort of large living Gilded Age socialites who kept houses all over the place. From its completion in 1895 until Mills' death in 1929 (his wife predeceased him by nine years) this one was used for only a few months every fall. 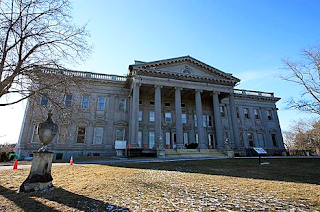 Here it is today. What used to look like a glittering millionaire's mansion now, oddly, looks like a post office. On the one hand, thank God for New York State, without whose intervention the house might well have been demolished. On the other, what is it about public ownership of gorgeous baubles like this that seems inevitably to dull them? 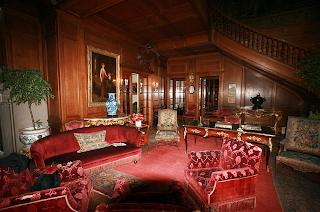 What isn't dull is the interior, which is right up there with Newport. The floor plan is a little wonky by virtue of the preservation of the old house. The Vanderbilt plan down in Hyde Park is far more logical and elegant. 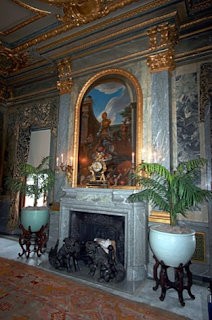 The dining room fireplace.
Posted by John Foreman at 12:55 PM