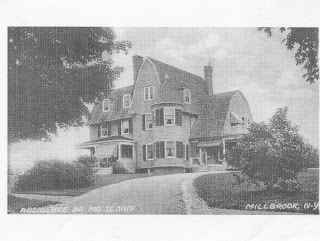 I'm going to call this the best house in the Village of Millbrook. It's no hilltopper mansion surrounded by a great estate. To the contrary, it sits on a mere two-acre lot on Maple Avenue. If it had been in Frank Capra's 1946 film,"It's a Wonderful Life," Jimmy Stewart would have lived next door. My hometown of Millbrook, in the heart of Dutchess County, New York, was architect James E. Ware's (1846-1918) oyster. He designed a slew of the afore-mentioned mansions that still surround the village (including the one I live in) and a few nice houses right in the village itself. This one was designed in 1896 for a Brooklyn native named Clement Wintringham who inherited a small fortune, retired at age 35 and settled down in Millbrook. 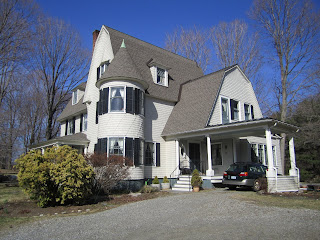 Here's the house today, looking remarkably unchanged. As a matter of fact, it is remarkably unchanged. The Wintringhams weren't a very lively bunch. She was the vice president of the Dutchess County Women's Bible Society, and he tried to shoot himself in the head in 1910 and missed, not that there was necessarily a connection. In 1919 a fast-living, hard-drinking, fox-hunting, wise-cracking, good-looking couple named Maude and David Sloan bought the place. No doubt life was a lot livelier under the Sloans. 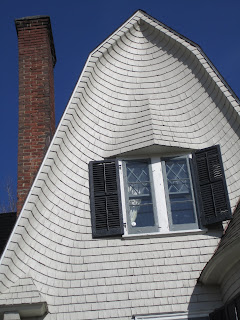 There's a persistent rumor in the village that Maude Sloan won this house in a bridge game. She was a gambler and a good time girl - one of her women pals once dropped in for bridge and drinks and wound up in the bushes passed out behind the wheel. However, it is Maude's house and not her lifestyle that is the reason I've posted these photos. I don't think I've ever seen such a bravura job of exterior shingling. 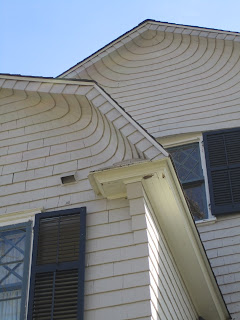 How great are these eaves and gables? How did they even manage to do it? 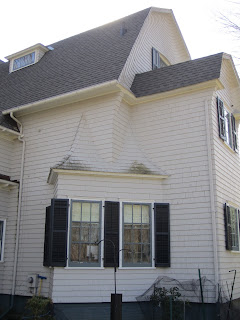 And what about this double bay window mounted onto a corner of the house? I've never seen anything like that. The sensuously shingled dual curves above the fenestration, melding into separate side walls at right angles to one another, is virtuoso design work. It must have taken a virtuoso carpenter to build it too. After Maude Sloan's death in the mid-1960s, a parade of unrelated owners occupied the house for almost forty years. It returned to the family in 2000 when Maude's grandson and his wife bought it and retired to Millbrook.
Posted by John Foreman at 1:57 PM